On my first day in Nairobi, I was not only unsure about what to expect from my first safari in the Masai Mara, I was extremely unsure about how to plan it. As a frugal traveler with a preference for on-the-fly organization, I had read that the most cost-effective way to embark on a Big Five safari was to join an existing tour at the last minute.

And so, I began to wander the streets of Nairobi looking for a recommended agency. I was quickly overwhelmed by the sheer volume of small companies offering safaris – and their persistence at recruiting you to their trip. They made it near impossible to ask for directions to a competing company, and I eventually settled on a company that had a fully formed travel agency that seemed dependable and organized enough. A quick discussion over pick-up times and payments left me fully sorted for a departure the following morning. In spite of being moderately hesitant about the legitimacy of the tour, I paid and nervously awaited my pickup.

Early the following morning, a honk alerted me that it was time for the adventure. Boarding a minibus, my two friends and I joined a group of five others destined for the Mara. Given that it was the end of August, our hopes were high that we would catch a glimpse of the Great Wildebeest Migration, in addition to the impressive roster of resident wildlife. 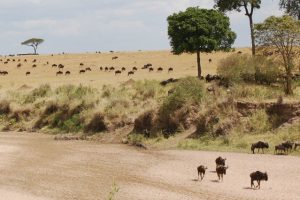 Tar roads turned to dusty trails as we passed Narok and approached the park perimeter. Having only left Paris for Kenya 72 hours ago, these roads alone thrilled me. As we entered our camp and were shown to our canvas tent complete with an adjoining bathroom, us first-time safari-goers could not contain our excitement. Giddily, we examined the features of this classic tent – rolling up our canvas blinds and turning on our outdoor showers. Having since explored some of the continent’s finest safari properties, I have come to realize how lackluster this budget camp was. Nevertheless, in the moment there was no finer or more intriguing place on earth. This initial arrival at a new camp remains one of my favourite feelings, in spite of how many safaris I complete.

Given my level of enthusiasm over a budget safari camp, you can perhaps imagine the all-consuming feeling of exhilaration that occurred as we set out at sunrise across the rolling hills of the Masai Mara. A cool breeze blew across the grassy plains as our eyes adjusted to the pre-dawn light. Slowly, I began to see that acacia trees stippled the horizon, with the northernmost members of the Great Migration grazing beneath them. Every creature thrilled me. Thompson’s gazelles galloped across the dusty dirt track, while zebra looked on from the roadside. The colours of the hornbills and lilac breasted rollers were illuminated as the sun grew stronger. No species was too small for my attention.

As the days progressed, we “saw it all.” Lions lazed within feet of our vehicle, while cheetahs bared their teeth during an afternoon yawn. Impressively enormous herds of buffalo complicated our driving routes, while giraffes looked onwards with their heads popping out over treetop canopies. The sightings of ostrich caught me off guard, while herds of elephants far surpassed any expectations held of their majesty and serenity. While the endangered rhino remained unseen in the Mara, our second safari in Lake Nakuru National Park revealed a healthy population that lived alongside an elegant and expansive population of pink flamingo.  The only member of the famed ‘Big Five’ who remained hidden was the elusive leopard. Something to draw me back, I suppose.

As a first timer, I remained completely unfazed by the other jam-packed vehicles traversing this spectacular landscape and crowding around the major species. I was after all, staring head-on at a lion with a group of only 30-40 people. Initially, that was extraordinary enough for a young Canadian girl. However, in the years to come, the traffic in the wilderness would become something I would actively avoid. For this first time, it was completely irrelevant. 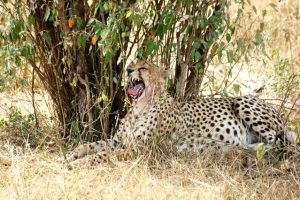 The crux of the safari did of course occur when we reached the southernmost point of the Masai Mara, where the mighty Mara River forms a natural border between Kenya and Tanzania. It was here that we found ourselves in the heart of the Great Wildebeest Migration, surrounded by an uncountable number of ungulates crossing to us from the Serengeti over a thankfully dry and crocodile-free riverbed. A sea of shiny black creatures positively coated the landscape around our vehicle, as 1.5 million wildebeest approached the northernmost point of their annual migration. Given that this was my first time seeing a wildebeest, the remarkable enormity of these herds was almost lost on me until years later, when sightings of herds of 20 became my new “remarkable.”

These adventures continued for three unforgettable days as we traversed the sprawling Mara and the tranquil Lake Nakuru National Park. Full- day game drives left us exhausted every evening, but a sleep in the bush left us enthusiastic enough to rise each morning to catch the absolute beginning of the sunrise before our game drive.

This first experience in the Mara prompted a life-long love affair with the African bush. I have found adventure in self-guided and ultra-luxury experiences alike, always returning to my absolute fascination with the species that inhabit the continent. I think the absolute magic of a first safari occurs with the unbridled enthusiasm and sheer gratitude for the experience.

As my safari roster grows, I find myself growing more critical and more jaded with the experience. It takes more to impress that girl who found total wonder in a simple tent. In the years since, I consciously try to return to that place of gracious amazement each time I am blessed to step into the bush.