I step into the matatu early in the morning on my way to work. I’m interviewing the CEO of a leading real estate company today.

A casual exchange of smiles with the stranger next to me sets us off on a cruise into town. We cannot talk much because reggae music is blaring from the custom-made speakers under the seat.

The bus conductor twists himself over his seat asks for fare from each of us, and folds the notes neatly and tightly in a strip between his thumb and forefinger.

A woman at the back shouts that the conductor still owes her some change.

“I know! Just stay cool,” he replies, in Swahili.

He responds as though he has had a long day at work, yet it is still early morning. He then proceeds to methodically issue change to passengers – relying entirely on an amazing memory of who gave how much – and winding up with the one to whom he owed the most.

As the matatu nears a bus stop, he bangs loudly on the roof of the vehicle and whistles. That’s a signal for the driver to drop off a passenger and pick up more.

For me this experience is usual. But to someone in Kenya for a brief visit, matatu culture may come as a shocker.

Matatus are Kenya’s famed mode of public transport. Just like London has the Tube and Chicago has the El, Kenya has the matatu. They are fashioned out of 14-seater vans or 32-seater passenger buses. They are used by up to 70% of Kenya’s population as the favored daily means of transportation from their homes to places of work.

Matatus are chaotic, to say the least.

They are a culture on their own. An average 14-seater van has a driver and tout (conductor). The conductor’s job is to fill up the van in record time by shouting its destination and the fare required for the trip.

The fares to destinations within Nairobi hardly ever go above KES.100 ($1). The driver’s job is to beat the traffic to the destination and back to the station in record time. 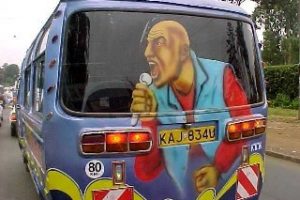 The ride is bumpy and fast, because the van driver is paid by the owner of the vehicle at a rate based on the number of trips made. If ever there is a competition for driving on the curb or on the wrong side of traffic, Kenyan matatu drivers would win.

Matatus play loud music. Custom-made sound systems are fitted under the seats, with plasma screens at the front for all to enjoy high definition music videos. At night, LED lights are switched on, turning the van into a sort of mobile discotheque.

If it is not loud music you are being subjected to, you are likely to join other passengers in listening to hilarious phone-in discussions on FM stations in the morning.

These sessions curiously always centre on people seeking advice on their cheating wives, absentee husbands or broken marriages. In a way, the passengers get consoled that their problems are not the worst in the world.

Another unique feature of these public transport vans is the art on their body. Graffiti from pop culture, music icons and contemporary topics adorn the sides of the vans in a show of artistic prowess. The more colorful the van, the more famous it is and the more likely it is to attract passengers.

In a bid to outdo competition, some matatus are fitted with wi-fi connectivity and satellite TV to lure passengers. They are popular especially with the hip and urban Kenyan youth who own smartphones and are in constant contact with their peers on social networks.

Here is a video about matatu culture in Kenya:

In a nation where internet usage and satellite TV has not effectively penetrated to the home level, this is an ingenious feature on public transport. 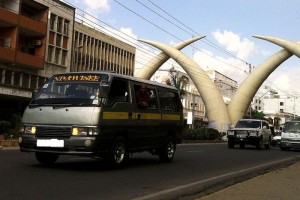 In 2003, the government enacted policies with a view to bring sanity to the public transport sector. The most significant changes set limits to the number of passengers that could be carried in one van. Previously, it was as many as the conductor deemed fit!

The conductors and drivers were also required to put on a specific uniform. All vehicles had to be fitted with speed-limiting devices and they had to paint a yellow line across the body of the car, indicating it is a passenger service vehicle.

With these regulations being enforced, some sort of sanity is on the roads. But most people do not mind these intrigues. Residents of Nairobi and other towns always seem to be in a hurry and the matatus help them toward this end.

The matatu remains an indispensable part of Kenyan culture that offers a necessary service and a thrilling roller coaster experience.

Travel Tip Of The Day: How To Take A Matatu In Nairobi
Tuk-Tuks, Tro-Tros And Tap Taps: 15 Taxis From Around The World
8 Things That Surprise Foreigners About Kenya