With its hot sandy streets, whitewashed mosques and bright flashes of color, Dakar beats to a different drum than other West African capitals. Spread out over a rocky peninsula, the year-round breeze carries the complex sound of mbalax music and the smell of piping hot thieboudjenne, the national dish. As sunset falls, thousands of Dakarois head to the beaches for open-air workout sessions, while in the bustling Medina area, women fry fish and plantains by the roadside. Fishermen haul in their catch in the shadow of sleek shopping malls, while men dressed in silky boubous stop for prayers and hawkers sell peanuts and wood carvings on every corner. Dakar is a city of contrasts, of gentle breezes and loud chatter, of colonial architecture and construction sites. Our Dakar city guide will help you negotiate the city by the sea.

Senegal’s national cuisine is lighter and less spicy than that of neighboring countries. Dishes like yassa poulet (chicken stewed with onions, lemon and olives) are influenced by Mediterranean traditions, while the national dish thieboudjenne (‘ceeb’ for short) is a feast of fish, eggplant, carrots and rice — a West African version of a Spanish paella. For 1000 cfa you can dig in to the plat-du-jour at lunchtime at Adji’s, a tiny food shack over by the plage de Ngor. (It’s a two-room affair on the left-hand side of the road, opposite the USAID office just as you turn into the carpark: you can’t miss it.) Dakar is also famous for its excellent seafood. 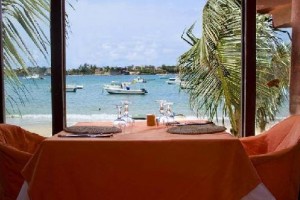 La Cabane du Pecheur, also at the plage de Ngor, has some the sea’s freshest offerings; we love the oysters and surf ‘n’ turf plates there on Sundays. Order a bottle of cold white and feel the sea breeze waft in through the big open windows. If you’re in the mood for dessert, there’s great gelato to be had from the ice cream shop inside the entrance to the Sea Plaza shopping mall (next door to the Radisson Blu).

La Cabane du Surfeur (not to be confused with La Cabane du Pecheur) over in Almadies has great views for sundowners. Or try the tapas bar at Le Ngor, a quirky restaurant perched on the clifftop further along the Almadies beach road. A curious cast of avian characters — fluffy white overgrown chickens, sea birds and nesting hens — struts past the bar, while bowls of hot tapas snacks, cocktails and carafes of vin blanc can be ordered. The terrace of the Hotel Sokhamon is also a great sundowner spot, with live jazz on Fridays.

Dakar was practically made from music; the complex beat of mbalax tunes, the Caribbean-tinged tracks from vintage stars like Pape Fall and Orchestre Baobab, and the big soulful voice of megastar Youssou N’Dour. Even the muezzins at the city’s mosques sing at the top of their lungs when they call to prayer. The outdoor bar/restaurant/club Just 4 U over in the residential neighborhood of Point E is the best place in Dakar to hear live music, with a regular line-up of old favorites and hip new voices. The Institut Francais (Avenue Joseph Gomis) in the downtown Plateau district has a dedicated outdoor auditorium with top-notch concerts several times a week, while Youssou N’Dour’s club, Thiossane (on Rue 10 in the neighborhood of Amitie 2) is a great place to dance the night away. With the exception of the Institut Francais, the best gigs in Dakar get underway after midnight, with even ageing superstars performing their best stuff after 2am. 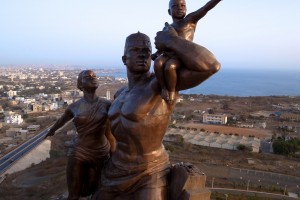 Visitors to Dakar are greeted, flying in, by an enormous bronze monument, Le Monument de la Renaissance Africaine, former President Abdoulaye Wade’s legacy. The statue is the tallest bronze monument in the world, overshadowing both the Statue of Liberty and Rio de Janeiro’s Christ the Redeemer. Its three characters — a shirtless African man holding up his scantily-clad wife and baby — caused a big controversy when the multi-million monument was first unveiled. Still, it’s unmissable, and many Dakar residents have warmed to the sight of it, particularly when it’s lit up at night. You can climb the steep flights of steps to the foot of the statue, from which there are spectacular views out over the city and an exhibition about the former president’s rather dubious project. The gift store sells kitchy mugs emblazoned with striking gold images of the statue.

Kick a ball around

Dakar lives and breathes soccer, and you can barely walk a block in Dakar without coming across an amateur game. Kids and local teams play on sandy pitches all over the city, while the 60,000-seat Leopold Sedar Senghor stadium hosts major league and national games. It’s also home to the finals of major wrestling leagues. Senegalese wrestling is a breed of its own; the competitors dress Sumo-style in underpants and mystical gri-gri tokens which are believed by practitioners of juju (a widely-followed form of animism) to ward off bad spirits. Each wrestling match is short; some barely last 60 seconds, but the crowd goes wild and the city often celebrates its wrestling victories all night long. 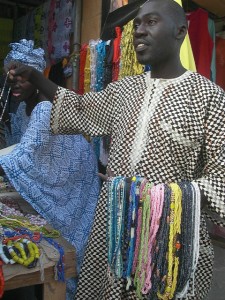 Dakar has a rich selection of markets, each with its own blend of the color, sounds, smells and chat that characterize Senegalese markets. Marche Kermel, over by the port of Dakar, is the best food market. You can buy everything from a live chicken to a bucket of oysters, plus delicious local fruits like the baobab fruit or the monkey bread fruit. Marche HLM is your spot for textiles. It has an incredible selection of West African wax cloth, emblazoned with colourful, quirky prints or even the busts of celebrities and presidents: this is where to come for a couple of metres of Obama-print fabric that can be rustled up into a shirt by the nearby tailors. Marche Soumbediounne, on the seafront, is the best place to buy jewelry, souvenirs and gorgeous hand-made leather bags; don’t ask the price of anything unless you’re considering buying. (Like elsewhere in West Africa, a price inquiry is the beginning of the bargaining process.) Marche Sandaga, in the downtown Plateau district, sells everything from beautiful necklaces and fun souvenirs to cheap t-shirts and old books. But beware the tricksters: they’ll try hard and even resort to scams in order to get you to check out their offerings. Many visitors find Sandaga an exhausting experience.

Dakar isn’t all music and mayhem. Find a little slice of calm at the Plage des Marabouts in the residential neighborhood Les Mamelles, or jump into the easy surf at Virage plage. The offshore islands of Ngor, Goree and La Madeleine all have swimmable beaches, although watch the tides; they can be strong. On Ile de Ngor you can also kick back with sundowners at Italian deck restaurant Chez Carla, or end the day with an easy walk up onto the headland.

The city’s sleekest upmarket hotel is the Radisson Blu, which commands pride of place on the palm-lined Corniche coastal road. The deck’s infinity pool stretches out to sea, while gracious waiters serve cocktails and meals with an added dollop of that famous Senegalese teranga — hospitality, in the local Wolof language. Doubles start from $300.

If you’re on a budget, head to the Hotel du Phare Les Mamelles, located halfway along a sandy, whitewashed street in the beachside neighborhood of Les Mamelles. With a homely, guesthouse feel, this spot is unbeatable when it comes to value for money; the rooms are bright and welcoming and there’s a restaurant, comfy couches and free wifi access.