The road from Sousse, with its golden sands and rows of beachfront hotels, to the Islamic city of Kairouan — a UNESCO world heritage site — is remarkably short. Just 32 miles lie between the two towns, divided by dusty farmland and olive groves baking under the fat Tunisian sun. And yet Kairouan’s Mosque of Uqba, the world’s fourth holiest site according to Muslim scholars, feels a world away from the cabaret clubs and 24-hour bars of Sousse.

As my taxi driver pulled up in front of the spectacular mosque, he recited a line from the Koran and urged me to remove the all-inclusive wristband handed to me at a hotel in Sousse. “If it looks like you’re staying at a nice resort, you’ll pay higher prices here,” he confided. We sat for a moment and watched as a tour bus pulled up in front of the mosque. Couples and families streamed out, brandishing cameras and guidebooks. “Everybody wants to see the mosque,” the taxi driver said. “It’s so famous, so beautiful. But don’t miss the rest of Kairouan. It’s one of the best-kept secrets in Tunisia,” he whispered.

Designed in 670 AD by the Arab general Uqba ibn Nafi, the Mosque of Uqba is one of the oldest places to pray in the Islamic world and attracts thousands of visitors each year. And I had come to see it. I stepped into the central courtyard, paying a small entry and camera fee, and wrapped a scarf around my head, covering my hair, as is obligatory in the grounds. Beneath my feet was cool marble; it entirely covers the central courtyard, which leads into the prayer halls and measures 400 square meters.

English and French-speaking guides are on hand to show visitors the minaret, the divine prayer halls with their stunning gold chandeliers, the Corinthian columns and the naves, gates and horseshoe arches that lace the courtyard’s perimeter. On sunny days, the colors are striking; the bright blue sky forms a canopy above, while the scarlet prayer rugs and marble capitals gleam in the sunshine. I stopped by the wooden pulpit in the main prayer hall; dating back to around 860 AD, it is the oldest in existence in any mosque, anywhere in the world, and is carved with vines, grape leaves and pine cones. And we called in at the library, once a revered center of learning that hosted some of the greatest writers, thinkers, astrologers, mathematicians, doctors and botanists up until the eleventh century.

As I walked towards the main gate, I asked the guides what it’s like to live in a town heaped with so many accolades. “All of Kairouan is a museum,” a man in his mid-30s named Fathi, told me. “Most people here like to be close to their Islamic roots, close to the past,” he said. I nodded. My bed that night would be at Dar Hassine Allani, a traditional medina house transformed into a museum and hotel. I was keen to discover what other remnants from the past I would find in the rest of Kairouan. 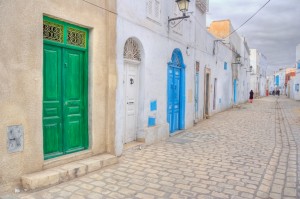 Wandering through the serpentine streets of the medina, passers-by stopped to chat. With the exception of a man selling leather handbags, nobody wanted to sell me anything. They just wanted to ask how I was, and understand what I had come to see in Kairouan. In the souk, there were no plastic sunglasses for sale. Instead I came across a street full of cobblers’ stores, bursting with elderly men stitching leather to soles by hand. Across the way, a Tunisian sandwich — with tuna, cured lemon, egg, olives and the kick of harissa sauce — set me back two dinars, or about US$1.20. I chanced upon the famous Patisserie Segni, known for producing the best sticky date makroud cakes in all of Tunisia. The store, painted in pistachio and equipped with ancient bronze weighing scales, is brimming with baskets of honey-drizzled cakes. I picked out almond, nut and apricot varieties and was given directions to a nearby makroud factory, where a patissier rolled out honey and date fillings by hand. The cakes keep for up to six weeks.

My penultimate stop was the row of carpet stores at the edge of the souk, where handmade rugs, blankets, scarves and bed throws are sold at much better prices than in Tunis, Hammamet or Sousse. A hand-sewn bed throw in Kairouan’s classic green and white colors goes for about 20 dinars (US$12), while a medium-sized rug can be had for 150 dinars (US$90). Every spring, the Flower Souk is held just around the corner from the carpet stores. During this period, the medina hangs heavy with the scent of jasmine, bougainvillea and orange blossom, while the alleys of the souk are lined with the bright pinks and whites of the petals. You can buy fresh, cut or dried flowers here, as well as essential oils from Cap Bon.

I couldn’t leave Kairouan without stopping at Bir Barouta, which comes a close second in Kairouan’s line-up of holy attractions. Here, a camel dressed in brightly-colored fabrics and ribbons walks blindfolded around a well, using its strength to draw water that’s said to be holy from its depths. Legend has it that the well is connected by underground channels to Mecca’s revered Zemzem spring. Not everyone drinks the water or buys into the story, but for those who do, it’s an important spiritual ritual. “This camel is the new guy,” said Mohammed, the camel trainer who works at the site. “He’s only been working for two months, but he’s doing the job wonderfully. We only choose camels that are in tune with the spiritual element of the site,” he said. I wondered just what that meant as Mohamed pointed out the steep, narrow steps that lead to the well. “Every day, the camel climbs those steps willingly, and every day he goes back down them,” he said. It seemed a fair test of spiritual, if not physical, aptitude.