Tunisia’s beaches are as soft and as pretty as the hand-woven carpets for sale in its ancient medinas. But with over 800 km (500 miles) of beach to explore, sifting through the sand to find the best beaches in Tunisia is the only hard part.

Starting with Tunis and winding further east, we lead you along the Mediterranean coastline to our favorite spots.

When Tunisians who live in the capital go to the beach, they head to La Marsa. A half hour’s drive (or 40 minutes by tram) from downtown Tunis, La Marsa’s blanket of golden sand is flanked by beach restaurants, a shiny shopping mall and upmarket whitewashed homes. If you’re hoping for camel rides, banana boats and paragliding, you’ll find La Marsa a little tame, but it’s a great place to sink your toes into the sand and share a picnic with friends or family on a weekend afternoon. There is a spot about halfway along the beach where you can rent two or three sun loungers and bamboo umbrellas for the afternoon for about 8 dinars ($3.50 US). Up on the promenade, salesmen sell popcorn and ice cream from mobile carts. 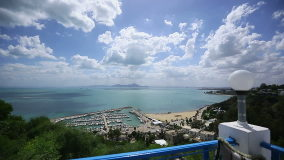 Tip: If you’re looking for a romantic spot to spend the day, follow the curve of the beach away from town and you’ll hit the quieter end of La Marsa. Here the sand seems softer and whiter, and the roar of the ocean drowns out the hum of traffic. Perfect for a sunset dip in the ocean. The stunning blue-and-white hilltop architecture of Sidi Bou Said is a five-minute drive away, and though Sidi — as its affectionately known — only has a humble stretch of sand, its lookout points over the ocean are truly spectacular.

Hammamet, 63 km (40 mi) from Tunis along the Mediterranean coast, is the product of a rags-to-riches fairytale. Decades ago, it was a relatively poor beachside town known for its salty breezes and high crime rate. Yet it was perched on some of the country’s most beautiful ocean-front real estate. Little wonder, then, that developers moved in, snapped up parts of the coastline and transformed it into one of Tunisia’s most sparkling tourist destinations, popular with everyone from Dubai princesses to the family of ex-dictator Ben Ali — who used to gather at The Sindbad hotel, throwing serious parties at the height of summer.

Ben Ali has been overthrown, but Hammamet remains, and the key to enjoying it lies in figuring out which part of the resort best suits your tastes. Over by the medina, Hammamet North marries beach action with an ancient city vibe; you can take a breather from sunbathing and wander through the cool medina, checking out the stores selling art, essential oils and the obligatory fake designer sunglasses. Then there’s Hammamet Jasmine on the other side of the peninsula. It’s a little more upmarket than Hammamet North, but still has its fair share of loud bars and clubs. Most hotels have their own little slice of beach paradise, roped off to ensure privacy.

But if you’re looking to get off the beaten track a little, we love the beach over by the Hotel President, halfway between Hammamet and Nabeul. There’s a cool breeze from the ocean’s messy white horses, you can trot along the sands on the back of a camel, and there’s a choice of watersports to choose from. And yet despite all the action, when we were last in town, this stretch of beach managed to retain its cool, calm vibe. If you must pick a spot to do sunset yoga in Hammamet, make it here, and bed down at the hip Dar Sabri hotel in Nabeul.

About an hour from Hammamet, Sousse has some truly spectacular, if a little overcrowded, beaches; picture soft turquoise water, flanked by land that’s buttered with golden waves. If you’re traveling independently and coming from Hammamet, the best way to reach Sousse is by train. It’s a relatively scenic route through the Tunisian countryside, past olive and orange groves and small villages. Or you can jump in a “louage”, Tunisia’s much-loved shared transport option. Just watch out for the crazy driving; getting behind the wheel in Tunisia is no mean feat, and can quickly descend into something resembling a video game. Once in Sousse, the best stretches of beach are around the Hotel Movenpick and Hotel Marhaba Beach. This is classic bucket-and-spade territory, perfect for whiling away a sun-drenched afternoon with the family. 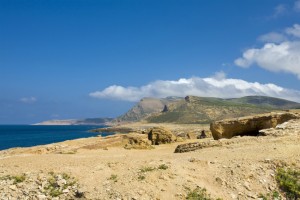 Entrance to the Roman Caves at Al Haouaria, Tunisia (Shutterstock)

Closer to Sicily than Tunis, wind-beaten El Hawaria (or Al Haouaria) is the perfect spot to disconnect and really escape the crowds. Located 120km (75 miles) from the capital on the tip of Cap Bon, you’ll do best to get there with your own transport and a map; the hotels and guesthouses are spread out along the rocky coast. There isn’t much in the way of beach activities, but the clear warm waters and romantic coves more than make up for it. The snow-white beaches here are probably the cleanest in all of Tunisia. Bring a snorkel, or just a good book and good company. History buffs might like to check out the Roman-era caves about 3 km (2 miles) outside the main town. To bed down for the night, Dar Enesma is a renovated dar (house) run by hosts Sonia and Frederic. It has all the trappings of a good boutique hotel, including great Tunisian home cooking, plus a roaring fire in the chimney come winter. 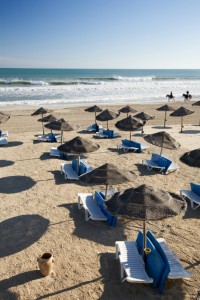 The island of Djerba is the crown in Tunisia’s crop of shimmering beaches. At just under 200 square miles, it’s the biggest island in the Mediterranean and first made its name under ancient Greece; it was here that Odysseus is said to have come across the infamous lotus-eaters, who survived on a diet of narcotic plants and lived together in a perpetual state of drowsy harmony. You won’t find any lotus wine on Djerba these days, but the laid-back vibe persists, drawing those keen to shake off the stresses of modern life and bathe in Djerba’s soothing waters. There’s a hip Ibiza vibe to Djerba these days, plus of course lashings of powdery white sand and access to stretches of desert ribbed with rolling dunes and studded with skinny date palms. You can hire a 4WD vehicle or embark upon a camel trek into the great golden yonder, or just kick back with a caipirinha and watch the blue sky blush as dusk draws closer. For something different, head to gorgeous Dar Bibine, a designer — yet not ostentatious — boutique hotel in the middle of a traditional dusty village. Or try Dar Dhiafa nearby.