No trip to Cross River state is complete without experiencing some of the last remaining wilderness and rainforest in Nigeria, from which the area derives its nickname: “the nation’s paradise.“  This beautiful, verdant region in the southeast corner of the country can take weeks to explore, but even if you just have a day or two you’ll still leave with some idea of its appeal.

For those with just an afternoon to spare, the best way to get a feel for Cross River is on a boat trip up the Calabar River. Boats depart from Calabar Marina and a return ticket costs N1,500. The journey winds upstream, past rusting oil tankers and pipelines, before emerging into lush green vegetation where local fishermen cast nets from dugout canoes in a scene unchanged for centuries. The trip stops at Creek Town, small town populated since the slave-trading era, for an afternoon break. There isn’t much to do here except perhaps indulge in a bottle of local palm wine, or take a trip to the house of Mary Slessor (the Scottish missionary credited with reforming the local tribe’s attitudes towards twins), but it’s a picturesque half-day trip nonetheless. 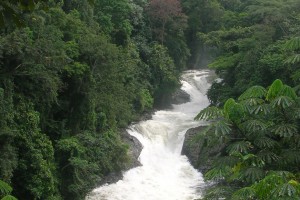 Another possibility for a leisurely afternoon (though perhaps better as a day trip), is a visit to Kwa Falls. To get here, you need to head out of Calabar towards Oban for about 45 km, during which time you’ll pass several police and army checkpoints where your taxi driver will probably have to “dash” (bribe) the officials in order to proceed. This is nothing to worry about, and drivers normally take these payments in stride. Once at the Kwa Police station junction, take a left up the dirt track. Here, there is ample evidence of the impact the global love affair with chocolate is having on this environment, with large tracts or forest recently cleared to make way for Chinese-owned palm oil plantations. Passing through this “green desert” reveals a thin valley of untouched rainforest through which the Kwa river descends over a three-stage waterfall. You will need to pay N1,000 to the officials at the head of the falls; after that a series of concrete steps lead past bamboo groves to the dramatic falls themselves.

For those with a day or more to spare, it is possible to get further beneath the surface of this beautiful state. The first stopover should be Rhoko Forest. Rhoko is the release site for the monkeys that the Cercopan sanctuary (based in Calabar) rescues from the pet trade. To get here, you need to head north on the Ikom road for around 80 km to the village of Ibogo, recognisable by the BIASE Local government building on the left hand side. From there, you need to transfer from local bus/taxi to an Okada (motorbike taxi) and ask the driver to head for “main camp.” The journey is N1,000 each way, and takes about an hour. Its not for the faint-hearted, as the 150cc Yamahas bounce along the single-track paths (that more closely resemble river beds than roads) at an alarming pace.

Once you pass the small village of Iko Apkerem, the bush gets denser, the clouds of butterflies thicker, and the calls of the local kids change from the more familiar “Oyibo” to the local Ekwaibo dialect “Bakara” (white man). If you’re stopping over, it’s normally a good idea to stop and introduce yourself to the local chief at Iko Esai. The camp has close links with the local community, and as such, the locals play an important part in protecting this small patch of protected wilderness. The camp itself is staffed by a small but dedicated team of researchers paid for by Cercopan. Accommodation is in simple wooden huts, raised from the ground and mosquito-proofed. They offer a comfortable night’s sleep (N2,000 basic, or N4,000 luxury) in true wilderness. Here, you can lie back and listen to the tree hyraxes and bush babies as they call to each other before waking to explore the rainforest or swim in the river in one of the most diverse biospheres in Nigeria. Cercopan asks that you bring all food and drink with you, and if possible, let the main center in Calabar know before you set off. 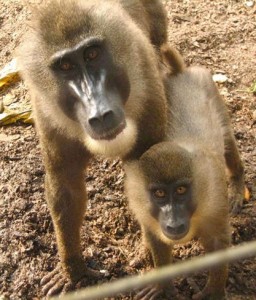 Around 200kms (4 hrs.) drive further on the Ikom Obudu road lies Afi Drill Sanctuary. Like Rhoko, this is a primate site, though the focus here is on providing a safe enclosure for both drill monkeys and chimpanzees rescued from the pet trade. The site is run by Pandrillus, and has a global reputation as the most successful drill monkey breeding programme in the world. Like Rhoko, you will need to bring everything you need with you, though the camp is accessible by 4×4 vehicles. To get there, first head to Ikom, then at the at “four corners” junction, take the Obudu road for 56 km and look for the “Afi Mountain Sanctuary” sign on the left hand side. There is a N250 daily tariff to enter, which goes directly into Pandrillus’ work improving the lives of the local Boki people. Accommodation is N6,000 per night for a log cabin with bedding and shower, or N2,000 for a campsite spot.

Once here, it is possible to visit the drill monkey and chimp enclosures, explore the pristine rainforest, or visit the nearby Kache Bano walkway, a treetop canopy walkover installed by the Cross River State tourism bureau. The journey passes numerous waterfalls and swimming pools on the Bano stream. The tireless work of Peter Jenkins (Pandrillus founder and Cross River Anti-logging task force leader) is evident here, and it is one of the best-protected, best-preserved sections of rainforest in Cross River.

For those unwilling or unable to endure the rigors of rainforest cabin life, a mere 100 km further north lies Obudu Mountain Resort. Set high on the Obudu Plateau, this resort (which doubles as a working cattle ranch) is seen by many in the industry as the crown jewel of Nigerian tourism. Here, there are 159 rooms equipped with televisions and Wi-Fi. The ranch also includes a swimming pool, waterpark, restaurant and cable car. Some committed conservationists complain about the over-development of such an environmentally important and fragile area. However, the views are undoubtedly spectacular, and Obudu offers the experience of looking out across acres of steamy untouched rainforest without the rigorous planning and trekking that getting to Rhoko or Api can involve. Prices run from N18,500 for a standard room, all the way to N60,000 for a mountain villa. 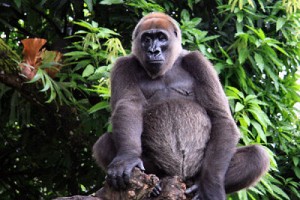 Another area worth visiting is Cross River National Park, which includes a large and well-preserved chunk of Nigeria’s dwindling virgin rainforest. The park does have problems with encroachment by loggers and illegal poachers, however parts of it, especially towards the Cameroon border, are still wild enough to support small populations of the Cross River gorilla (which was once thought to be extinct). The park is divided into two sections: Oban (3,000 sq. km), and Okwangwo (1,000 sq. km). There is a “tourist village” based at Kanyang, which provides reasonable accommodation and a good jumping-off point from which to explore the park. Despite the challenges it faces, this is still the best place to see the pristine rainforest that blanketed much of West Africa before logging and palm oil production took their toll. It is a beautiful and rewarding part of the world very much under-represented on the global tourism radar.