Nothing beats feeling the breeze against your face as you pedal past Table Mountain or the ocean as its waves crash against the rocks. Cycling is one of the best ways to get up close and personal with nature while scoping out the city. Cape Town recognizes that people are becoming increasingly interested in cycling as a means of transit, leading to the expansion of trails to see more of the area and slowly earning its way to becoming one of the most bike-friendly places in the world. Here are five great places for cycling in Cape Town, South Africa.

You’ve seen this view in every postcard of Cape Town, more specifically of Camps Bay. The Sea Point Promenade runs parallel to the ocean and the Twelve Apostles Mountains on the other side, making this one of the most dramatically contrasting views to bike through. The trail is paved and stretches for four miles long, taking you through sea-facing restaurants, hotels and shops. You’ll have to share this route with runners and people strolling to take in the gorgeous view. 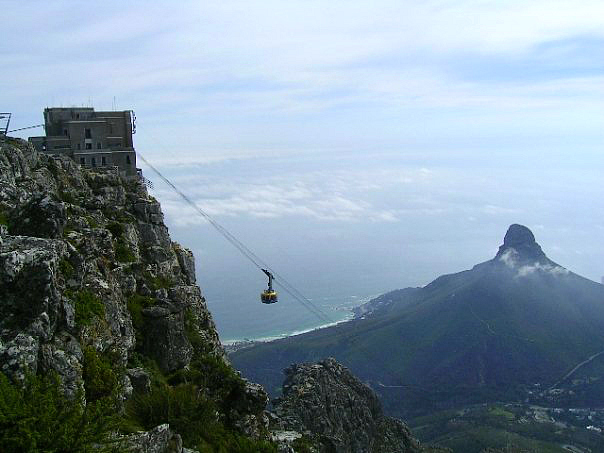 Many people like to take the cable lift to descend back to the bottom of the mountain, but you can take the adventure to another level. Unbeknownst to most tourists, Table Mountain actually has some mountain biking trails where you can tackle the rough terrain and get a birds eye view of Cape Town. Keep in mind, you have to register for a permit from the visitor center before you go wheeling off to your new journey.

Imagine going on a trek and seeing scores of seals. You pedal on before seeing grazing wild ostriches, zebras, baboons and secretary birds within steps of the sea. Look into the ocean and you might spot a pod of whales or dolphins bobbing their heads out of the water. Approximately 40 minutes outside of Cape Town is Cape Point National Park that allows cyclists to visit the area as long they stay on the road and don’t venture into the rugged terrain. The park is also home to the well-known Shipwreck Trail, where series of sunken boats washed up on shore.

Between the two areas of Bloubergstrand and Melkos is Cape Town’s newest addition of a bike lane that is 5.58 km long. The area remains mostly untouched since its home to Africa’s only nuclear power plant, but cyclists who have explored the area remark it as being one of the best spots in the country for a scenic view. From the trail, cyclists can view Table Mountain and Robben Island (famous for where Nelson Mandela was held imprisoned).

Mark your calendar for the next upcoming Moonlight Mass Cycle, where you and other like-minded cyclists will join together and explore Cape Town in the nighttime. Trek past the hip Bree Street as it flickers in the dark before your group makes its way to the sea to continue the cycling adventure. Moonlight Mass Cycle is held once a moon, but it must be during a full moon. The idea quickly became a popular activity and its now the largest biking social activity in all of Africa. Not to mention, you’ll get to meet the locals who share your love of cycling.

This is not for first-timers who aren’t in tip top shape as cycling in the Winelands means tackling hills. But for those of you who are seasoned cyclists, its advised to cycle past wine estates with rows of vineyards and dense woods with the ocean in the backdrop. After cycling through the strenuous route, reward yourself by checking in to a winery for a wine tasting paired with a charcuterie board. The route is so gorgeous and challenging that cycling competitions are often held in the Winelands.

Super Healthy Restaurants In Cape Town You Need To Try