Across the horizon of the Bale Mountains and Simien Mountains in the highlands of Ethiopia, an unexpected species of canine is the area’s most dominant predator. The presence of Ethiopian wolves still has Gelada monkeys scrambling for the cliffs for protection, while mole rats burrow their way underground as soon as they get a whiff of the ginger-coated creature. To unsuspecting hikers, a quick look at the wolves will have them wondering if someone left behind their Shiba Inu as they tend to look more dog-like (or a crossbreed of a wolf and a fox). With no natural predators in the area, it would make sense that the Ethiopian wolves would be set for a comfortable life for centuries in the highlands. Sadly, this couldn’t be further from the truth. The wolves are currently ranked as the world’s rarest species of canines and it’s estimated that there are no more than 450 of them left in the wild. 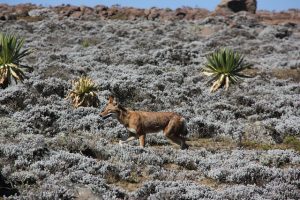 So what has been causing their rapidly declining population despite having no natural predators in the area? In 1991, conservationists saw the first catastrophic occurrence among the wolves during a rabies outbreak that claimed the lives of many. The rabies was transmitted down to them by feral dogs that live in the mountains and nearby villages. Once the outbreak died down, the disaster didn’t end there. The outbreak returned in 2003, 2008, and more recently, in 2014. Up to 75% of the wolves population was reduced to only hundreds. Thanks to a team of passionate conservationists, the Ethiopian Wolf Project was established in 1995 to find a solution to keep the wolves from going extinct. In the early 2000s, scientists came up with a vaccine and quickly began treating the wolves. They started the search for the wolves on foot, sometimes on horseback and later in jeeps with the motto “Born Free” inscribed on the sides. Finding the wolves was no easy task and they mostly came across carcasses. Whenever they did find a wolf, it tended to be a solitary one. Throughout the conservation project, they vaccinated dozens in hopes to save them. The project’s team leader, Eric Bedin describes the journey as, “it’s cold, tough work.”

Sadly, the effort proved fruitless as many of the vaccinated wolves died months later due to distemper. With less than 500 left in the world, the team went back to the drawing board, determined to not let the past disheartening failures stop them from saving the dying breed of the majestic animals. For those who are confused why the same vaccines we use for our beloved dogs at home cannot be used on the wolves is exclusively based on the fact that they’re wild animals and exposed to different elements than our pet poodles. In 2018, hope was in the air again as conservationists announced a new plan; oral vaccines. The team (many of them working in the laboratory at Oxford University) developed a strain of oral vaccines that had high success rates tested on prairie dogs and black-footed ferrets in the same area and even was used to entirely eliminate rabies in red foxes. In other words, this was proven to be a much safer vaccine with little to no fatal consequences. The team received a green light to go ahead with their effort in 2018 to inject the oral vaccine in goat carcasses and spread the meat across the land for the Ethiopian wolves to feed on. The vaccine is designed to boost up their immune system, giving the wolves a greater chance to beat the rabies outbreak.

Today, the Ethiopian Wolf Project is currently monitoring up to 40 wolf packs, anxious to see the results and hoping for good news. In due time, we will know whether to pop open that champagne bottle or not. With hopes of the wolves being secured and thriving once again in the Ethiopian highlands, we must keep in mind that they are never out of danger. Habitation loss still plays a large role in their livelihood and sport hunters with a thirst for rare species will sneak in to nab their trophies. Roads are being expanded and paved through the the mountain ranges, resulting in undocumented roadkill wolves and an increased report of hybridization threatens their genetic reproduction when a wolf mates with a feral dog.

Whatever’s in store for the future of the Ethiopian wolves, we hope it’ll be a long and prosperous one. A future where it’s possible that future generations can visit the park and see the red fox-like dogs frolicking in the highlands and cubs following closely behind their mothers. May they be a living testimony that it’s possible to restore the highlands its true royal pack to preside over the land that they love. To donate to the Ethiopian Wolf Project, click here.

The Best Places To Go Hiking In Ethiopia

The Most Endangered Species In Ethiopia