In northeastern Botswana, an unusual land formation draws tourists from across the globe to enjoy the full splendor that is Makgadikgadi Pan, one of the world’s largest salt pans. The pan is so large that is over 5,000 square km wide. So where do you go to get your dose of incredible nature and social-media worthy photos? That’s where Kubu Island comes in. 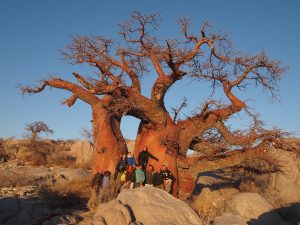 Don’t be fooled by the name, Kubu Island isn’t actually an island, but rather, an outcrop of ancient granite rocks that are up to two billions year old. Because the area reaches 20 meters above the pan and stretches for 1 kilometer wide, it appears to be a monolith in the middle of the salt pan.  Visitors love to explore the island to admire the strange-looking baobab trees that look like roots ascending to the sky and African star chestnut trees. It’s not uncommon for tourists to find fossils that show evidence of life that once occupied this island. Centuries ago, the island thrived with hundreds of species of wildlife and plants. In fact, the name derives from the Setswana language where “kubu” means hippopotamus, because the island was literally surrounded by the giant mammals before the land was dried up.

Many people are surprised that in the midst of what appears to be a desolate, unforgiving land, there is a decent amount of wildlife that call Kubu Island their year-round home. Once on top of the island, look into the distance and you’ll find thousands of lesser flamingos along with occasional visitors that pass by like elephants and lions.

History lovers, you’ll appreciate this. Fossilized animals aren’t the only thing that has been shown to live on the island. There is evidence of

human life dating back to one million years ago (older than the homo sapiens) such as spears, art, stone tools and more. Today, Kubu Island is considered a sacred place to the Khoe people, since its believed that the island was used as a site for human sacrifice and other important rituals like circumcisions around the 1400s to the 1700s during the dynasty of Great Zimbabwe. Many of the local Khoe people still follow the tradition of hiking up to Kubu Island to make offerings and worship their God. Visitors will occasionally spot offerings left behind on altars on the island. Because the area is being held up as a sacred land, visitors are asked to respect the area by leaving nothing behind and cleaning up after themselves. They’re also asked to not drive on the island, but instead, park in a designated area and explore only by foot.

There’s no need to feel like you have to stay in a hotel in a nearby city and make your trek to Kubu Island. Instead, you can camp out under the stars at its own campsite with 14 spaces available per night. Kubu Island Camping Makgadikgadi Pans Botswana offers rustic camping experience with access to a toilet and rock fireplace. The campsite requires at least 10 weeks in advance to reserve a tent, but is well worth the wait and effort since you’ll wake up at daybreak to admire the sunrise with the lesser flamingos in the backdrop. 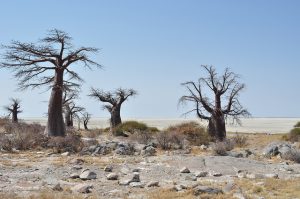 Visitors can either explore the island on their own or reserve a guided walking tour through the campsite. A skilled guide will lead you and your group through ancient spots where he/she will lecture you on its prehistoric past as well as the flora and fauna of the area. Or take your experience up a notch and get your adrenaline pumping by joining a Kubu Island Safari on quad bikes. Over the course of a few days, a group of cyclists will make their journey on the pans, stopping in various locations including Kubu Island. The package includes stays in pristine camps and picnic spreads. However you choose to explore the island, it’s sure to be an unforgettable experience.

Biking In Botswana: An Alternative Safari

Luxury In The Wilderness: 15 Places To Go Glamping In Botswana

The Thriving Wildlife Of The Makgadikgadi Pan