We know them as the lovable, goofy critters that stand upright to scout for any potential dangers. Meerkats gained most of their worldwide popularity after the well-rated show “Meerkat Manor” followed a colony around and narrated their story. But did you know you can quietly observe them in their natural habitat without having to see them behind glass walls in a small enclosure in zoos. Meerkats are quite easy to find in Africa if you know exactly where to look, and that’s where this article comes in handy. 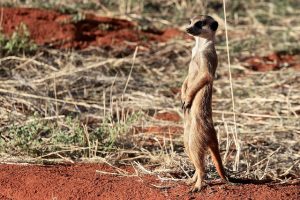 One of the easiest, and most guaranteed way to spot a colony is through South Africa’s own Kalahari Meerkat Project right by the Kuruman River Reserve. There, a team of scientists and researchers study a nearby colony, documenting their routine, patterns and behavior. Visitors are welcome to check out the behind-the-scenes process of studying the meerkats, and of course, admire the animals alongside the researchers. Half-day tours are offered from nearby Van Zylsrus Hotel or Leeupan Guest Farm where a skilled guide will lead you to the research site. From there, a researcher will take you to the colony and tell you all about their findings. The tours are held every Sunday, early in the morning, that way you’ll catch them waking up and doing their morning routines of grooming and playing. If a half day visit isn’t enough, you can put in a request to be a volunteer at the research project and may get selected to help out on the premises for a full week. That’s a lot of interaction you’ll get with the meerkats. Check with the project’s website to find out application deadlines to volunteer and put in your request. 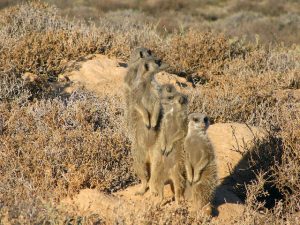 Another location to marvel at the meerkats in South Africa is DeZeekoe Guest Farm in Western Cape, just right outside of Oudsthoorn. Visitors will have a cozy accommodation in a luxury lodge at the foothills of the mountains, but come early morning, you’ll get ready for your meerkat tour that’s offered by the farm. Guests will be treated to a hot cup of coffee while they sit on lawn chairs provided for them to enjoy the colonies. The farm will do anything to make sure their guests see the meerkats by sending their guides early in the morning to scout their locations and pinpoint their whereabouts before coming to the farm to pick up the guests. It’s a fail-safe way to see the meerkats before heading out to the wilderness. And if you’re feeling confident enough that you can find the animals on your own, you can try your luck at Kgalagadi Transfrontier Park that has a self-driving eco trail through the park and many visitors report seeing meerkats along the way. Of course, you’ll find some of the larger game animals that lives in the park as well.

But if you’re not in South Africa, you can see the meerkats in other locations like Botswana’s Makgadikgadi Pans National Park. The park is home to one of the world’s largest salt flats and the meerkats have made it their year-round home. The meerkats in the park live in a section called Jacks Camp and the animals are used to human presence. In fact, tourists will sometimes walk up to the colony, sit down with them and let the critters inspect them. Some visitors report that the friendly creatures will even climb up to their heads to stand up on it and look around. Audley Travel offers a Botswana salt pans safari where you can see them and more. Because of their not-so-shy and gentle nature, meerkats are favorites among visitors who come to the park to see other wildlife like elephants, lions, cheetahs and more. Luxury Safari Company is a local tour that will take you to Jacks Camp to interact with them while a guide tells you all about them. Guests can also opt to stay overnight at Jacks Camp’s luxury lodge but it’s advised to book your room as soon as possible. There are only 10 rooms available per night.

Or head west and you’ll find yourself in Namibia at Etosha National Park where meerkats also thrive. There, you’ll find colonies anywhere from 10 to 40 meerkats scrambling in and out of rocks, burrowing in the ground to look for grubs and perhaps, coming closer to you to inspect. Stay overnight at Etosha Safari Lodge right in the park and you’ll be treated like royalty after your safari tour when you retreat back to your luxury tent.

10 Things You Didn’t Know About Meerkats