Le Riad is tucked away on a side street in the busy Casablanca downtown and serves some of the most authentic Moroccan cuisine you can get in a riad setting, of course. Outside, a small gate leads through a hallway up a multicolored stairway into the top level of the restaurant. Inside there are exotic mosaics covering the walls with stained glass windows opening up to the streets below. A few plush couches in the back invite one to come sit, while mix-and-match tables and chairs fill the floor in the remainder of the room. Below is a smaller, more casual area is available for regulars. 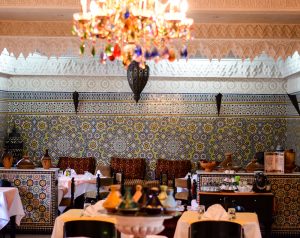 The menu includes plenty of traditional Moroccan tagines and delicacies. If its popular in Morocco, it’s probably being served in this restaurant. Before we placed our order, we were brought some fresh bread, which didn’t come with any butter or olive oil to dip it in. It was super fluffy, but a bit too dry to eat all by itself. For appetizers, we ordered the mixed grill of viande hachee, merguez, brochettes, saucisses and French fries. It was accompanied by spicy English horseradish mustard, curry ketchup and a traditional matchuba for dipping. The fries were pretty average and the kebabs were a bit on the dry side, but they both went well with the dipping sauces (the real star).

Next came the mains: chicken tagine, and a mixed plate of fried fish (friture de poisson). The tagine came out sizzling and was bursting with a rich lemony flavor and strong cumin overtones. On top of the fall-off-the-bone chicken was a layer of perfectly cooked onions that melted in your mouth. I’ve had several tagines throughout Morocco and elsewhere, but this was definitely one of the best that I’ve ever had. The plate of fish was also delicious and came with head-on shrimp, calamari, white fish, and one fish I wasn’t sure of, but it had its head on with tiny piranha-like teeth in its mouth. The fish was cooked well, albeit a little bony. 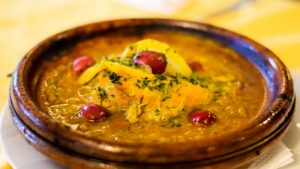 The tagine happened to come with a free dessert, so we went for the tiramisu, which was the off-menu dessert of the day. While good, it was a bit tangier than expected and the top layer was covered in a copious amount of cocoa powder which made me cough a bit. If you order the tiramisu, be careful not to inhale this.

Throughout the meal, the staff was prompt and able to explain several items on the menu that we weren’t sure of. The top level of the restaurant was completely empty during my entire dining experience (from 6:30- 8:00pm). A few locals were downstairs, but it was overall pretty dead and it was a bit odd to eat inside such a large room all by ourselves. However, it was a Monday night, so it could have just been slow.

If you’re in downtown Casablanca, do head to Le Riad for some of the most delicious Moroccan fare that you’ll find anywhere.

10 Things You Didn’t Know About Casablanca

The Best Business Hotels In Casablanca