Bats get a bad reputation because they are often depicted as minions of vampires and used as scapegoats for pandemic diseases. But did you know that most bats are harmless in general and visitors can admire the flying rodents in their natural habitats without posing a risk to themselves? While bats can be found in several countries, they are particularly abundant in Africa, making it a the top destination for nature enthusiasts to go bat watching. In fact, there’s estimated to be over 1,000 species of bats on the continent. Here’s where you’ll have the best chance of seeing bats in Africa.

Did you know that Mauritius has its own megabat species that’s named after the country? The Mauritian Flying Foxes are recognized by their incredibly large size and can be easily be spotted in the daytime in Black River Gorges National Park. Guests will see the golden-colored bats hanging upside down from branches as they catch their beauty rest.

This string of tropical islands off the coast of Mozambique is a haven for bats. Thanks to its tropical landscape and endless supply of fruits sprouting from its trees, bats are drawn to this island to make it their year-round home. The most popular breed of bats in Comoros are the Livingstone’s fruit bats that are easily recognized by their incredibly large size. Sadly, they’re on the endangered species list and it’s believed there’s only 1,000 of them left in the wild. When visiting the island, head for the forest where they are known to inhabit. 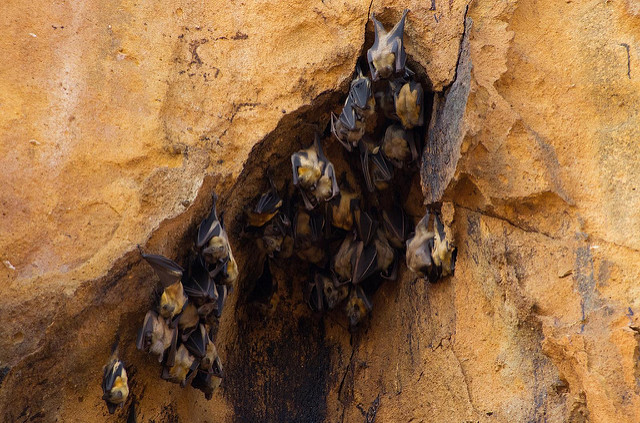 Mauritius isn’t the only country that has its own bats named after them. Madagascan Fruit Bats can be sighted throughout the country tucked away in rooftops and in the crooks of caves. They’re over-hunted by locals for bush meat which places them on the Threatened Species List. Start with Ankarana National Park in the northern tip of Madagascar where thousands of bats are known to live.

South Africa’s Big Five gets all the attention when visitors explore its protected areas like Kruger National Park, but bats can be spotted here just as well, especially in the daytime. It’s common to find them nestling under thatched roofs and branches. There are about 46 species of bats found throughout Kruger National Park, so when exploring the park, don’t forget to look up as well.

The world famous Kasanka National Park is the place to be to witness millions of bats in migration. Imagine looking up to see the sky checkered with so many of these Straw-coloured Fruit Bats. Every year around October to December, approximately 10 million of the winged animals flock up to the sky to create this phenomenon and dramatic sight for visitors. Be sure to plan accordingly to catch this once-in-a-lifetime event.

These Angolan Collared Fruit Bats are found tucked away in the Kakamega Forest in Kenya. Due to its rich wilderness, Kenya is home to so many species that’s its almost guaranteed that tourists will spot one without even looking for them on their trip. Walk into any national park in Kenya and you’ll find at least a handful of species that occupies the country.

Where To Have The Best Wildlife Experiences In Africa

10 Of The Best Places To See Rhinos In South Africa

12 African Countries Where Elephants And Rhinos Could Soon Become Extinct