A visit to South Africa isn’t complete without a few days in the country’s largest protected area and favourite game reserve, Kruger National Park. Locals and foreigners love it equally; not only because of the Big Five, antelope, plains game, reptiles, and birdlife that call it home, but because the park is so welcoming and unpretentious.

Although Kruger is dotted with five star luxury lodges and camps, the park’s own rest camps still offer an affordable place to rest your head. Chalets and campsites may be simple, but all you really need out there is a bed, a hot shower, and a “braai” (barbeque) where you can flip your steaks under stars in the evening.

Another aspect of Kruger that sets it apart from many other Big Five game reserves is that you can explore almost the entire park in your own car – or rental. No need to book an expensive game drive to see the beautiful animals that roam these two million hectares. Off course, it’s well worth treating yourself to at least one of these guided drives, as the rangers leave camp before the sun comes up and stay out after it has set. This experience gives visitors a magical glimpse of the park devoid of cars – not to mention the incredible, burning red sunrises and sunsets so typical of the African bush.

With such a vast expanse of nature and wild habitat to explore, it’s difficult to know where to begin, especially if you have only a few days. It’s important to know which areas have more and less animals and what type of animals you’ll see where. This simple guide will give you an idea of the rest camps best suited for seeing the Big Five, avoiding the crowds, and testing your bird navigation skills.

Remember that we’re talking about wild animals and it’s impossible to guarantee any sightings. The best time to visit Kruger is during the South African winter (May – July). This is the bush’s dry season, so the vegetation is thin and there is less water in the park making it easier to spot the animals. 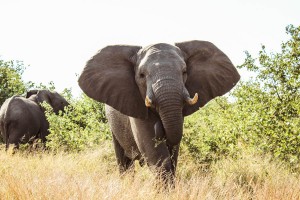 If you’ve never been on safari in Africa, then this is the place to start. It’s one thing seeing lions and leopards in the zoo, but it’s life changing to see them in their natural habitat — hunting, stalking, and lazing in the shade. Generally speaking, the southern section of the park offers the best chance of ticking lion, rhino, elephant, buffalo, and leopard off your list. The vegetation here is more diverse and there are many rivers, creating the type of habitat where a wide variety of animals can prosper. The downfall of visiting the south of the park is that the rest camps are big and crowded, and the roads are very busy. Do yourself a favor and check when the South African school holidays are and avoid them, as this is when the park is at its busiest.

Tip: Crocodile Bridge Rest Camp may seem like a small gate camp on the border of the park, but it supplies easy access to the wildlife rich areas around Skukuza and Lower Sabie without the crowds associated with these busy camps. 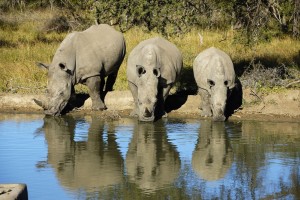 It’s part of the Big Five, but there’s a specific area in the park where rhinos are even more prolific than around Lower Sabie and Skukuza. Considering the huge amount of rhino poaching in South Africa, these silent, and often grumpy, grey beauties should be high on anyone’s list. Moving more to the south west of the park, your chances of spotting both white and black rhino increase rapidly. On the other hand, there are significantly fewer lions and leopards in these parts.

The agile creatures of the bush — lion, leopard, and cheetah — love the open plains in the center of the park. These grassy areas are the ideal stalking grounds, while the flat stretches of bush make it easy to spot large herds of peacefully grazing impala, zebra, and wildebeest. It’s a tranquil scene indeed, until a lion spots them.

Tip: The road connecting the two camps is the best to drive to see animals in the area, so when Satara (a large camp) gets too busy, Orpen offers a quieter alternative. 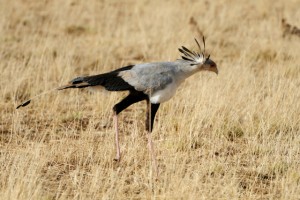 Kruger is the best place in the country to set out on a bird watching expedition. More than 500 species call the park home, and while you can’t always rely on predators to show their faces, you can trust the birds for a consistently beautiful show. The best place to visit if you’re focusing on birds is the north of the park. This is where you’ll find the Pafuri region, an area renowned for its diverse birdlife. The area around Pafuri is pleasurable for bird watchers, because the vegetation there doesn’t vary as much as the south. You’ll mostly see mopane veld spread out around you, so there are less predators, therefore fewer visitors. The roads are surprisingly undisturbed, and you’ll often find yourself completely alone with the bush.

Maybe you’ve been to Africa before, you’ve seen the Big Five already, and you just want to enjoy a quiet holiday in the bush. If so, Kruger’s bushveld camps are your best bet. You won’t find more than 15 chalets in some of them, and they’re all located down private roads, only accessible by those who stay there. You can still look forward to great buffalo and elephant sightings that you find in other areas.

Tip: The further south you stay, the more animals you will spot on drives.