In 2002, Zakouma National Park– located in the southeastern quadrant of Chad — boasted a healthy herd of some 4000 elephants.

Then heavily armed poachers arrived, crossing the border from Sudan. By 2010 these thugs intent on obtaining ivory reduced the numbers by 90%. Chad had a crisis on its hands.

So the government turned to African Parks. This NGO, now managing 10 parks in seven countries on the continent, has developed a specialty in wildlife protection using a combination of tracking, aerial surveillance and, no surprise, heavily armed militia units. This move was part of a long-term strategy to ensure that that its parks are ecologically, socially, and financially sustainable for the long term, and to boost tourism.

It’s a move that seems to be working: In 2016, Zakouma lost only two elephants to poachers (they were stopped by the militia before they could abscond with the tusks), and Chad became the second-fastest growing destination in Africa for tourism.

Chad still has a long way to go to rival South Africa or Kenya, but with investment in parks like Zakouma, the outlook is good. Here’s a peek at just some of what the park has to offer. 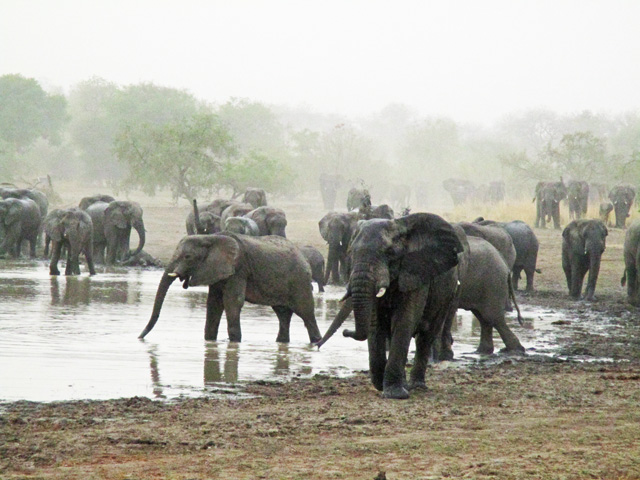 Elephants arrive at a watering hole at dusk. (Photo by Susan McKee)

Elephants in Zakouma – First of the “Big Five”

Luckily the pachyderm population in Zakouma has now stabilized, and calves are being born again. 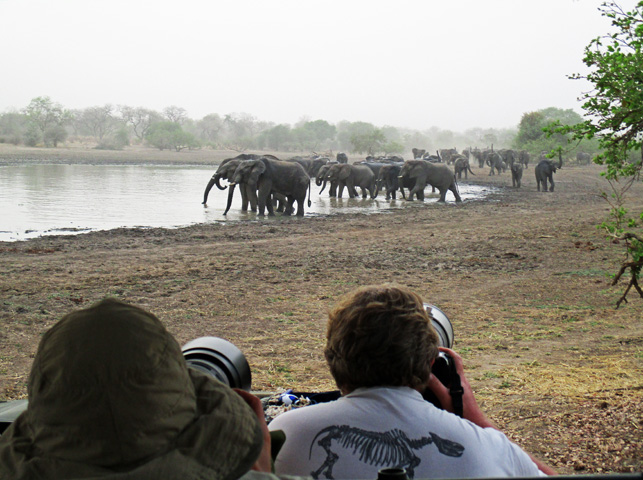 A herd of elephants arrives at the waterhole. (Photo by Susan McKee)

In search of elephants

Because there are (as yet) so few outsiders visiting Zakouma National Park, it’s possible for safari vehicles to get really close to wildlife, such as this one from Passage to Africa, led by Michael Lorentz (right). 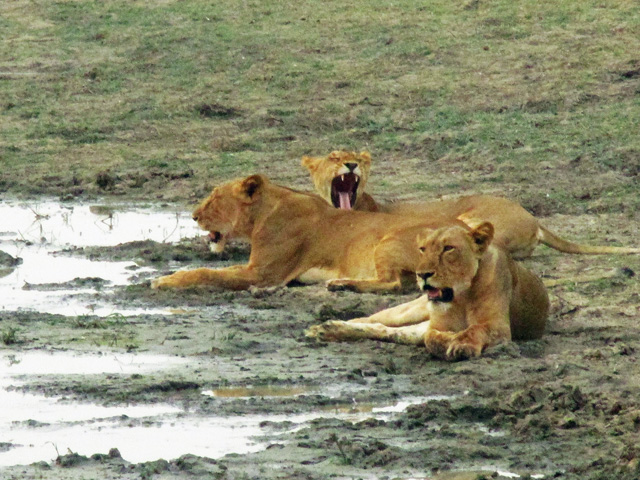 Lions lounge by the water on a hot afternoon. (Photo by Susan McKee)

Lions – Second of the “Big Five”

When the temperature is over 100° F on a sultry afternoon, there’s nothing like stretching out by the water. 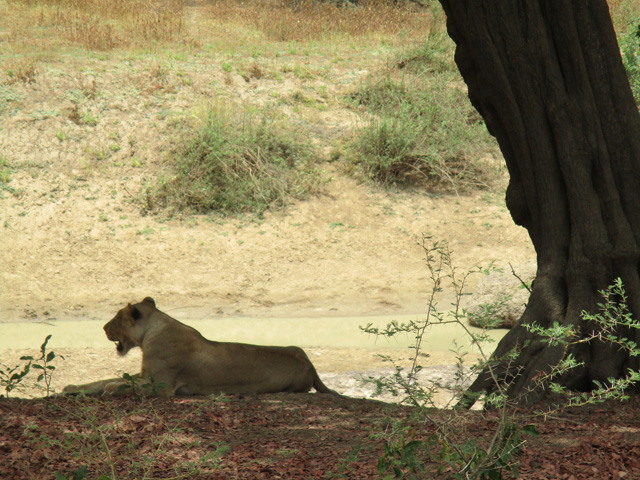 It’s harder to spot Zakouma’s lions when they stick to the shadows, lazing about in the shade of a tree. 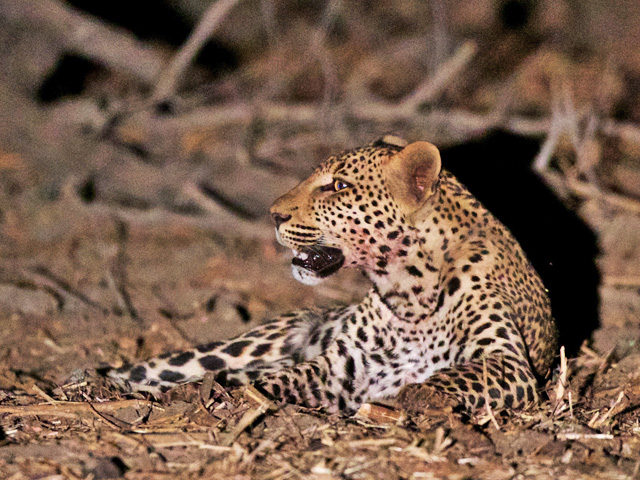 A leopard rests between hunts. (Photo by Michael Lorentz, used with permission)

Much more difficult to find than lions because of their natural camouflage and skittish nature, leopards also prowl the savannas of Zakouma. 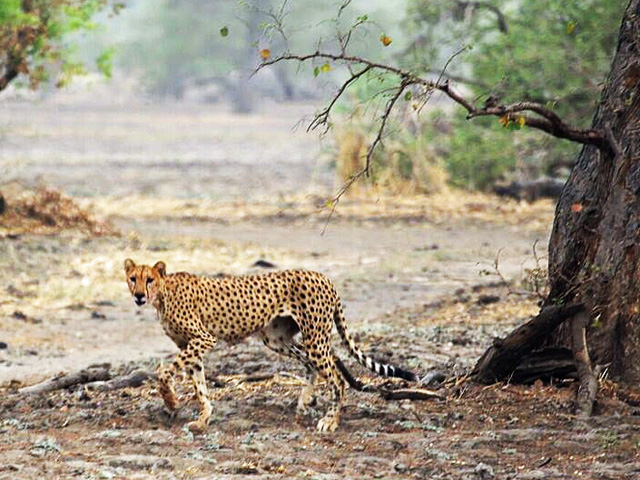 Leopards aren’t usually on the prowl in daytime. (Photo by Michael Lorentz, used with permission)

Between hunts, leopards “store” their kills in trees to keep them from competing predators. 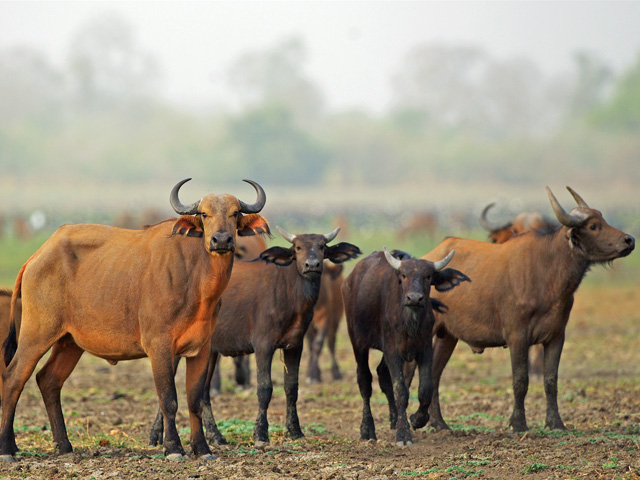 Cape buffaloes are the fourth of the “Big Five”

Dust clouds kicked up by thousands of hooves announce the arrival of the Cape buffalo. 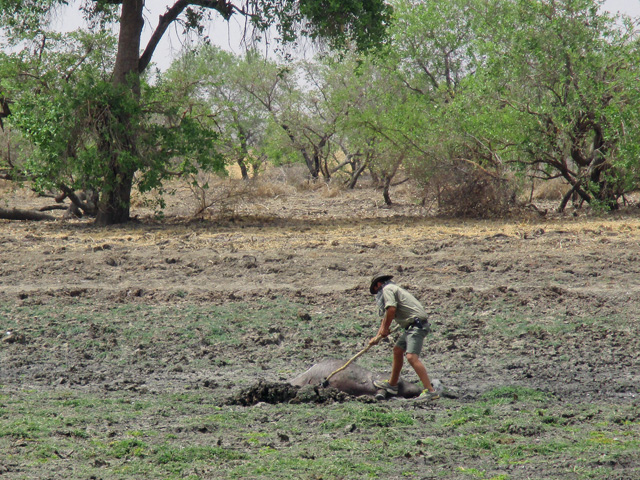 Adrian Bantich strapped his knife to a long stick to cut into the buffalo. (Photo by Susan McKee)

The viscous mud at the edge of a waterhole fatally trapped a Cape buffalo. Because no large predators had yet arrived, one of our guides “helped” the raptors by piercing the animal’s tough exterior so the birds could feed before the carcass rotted. 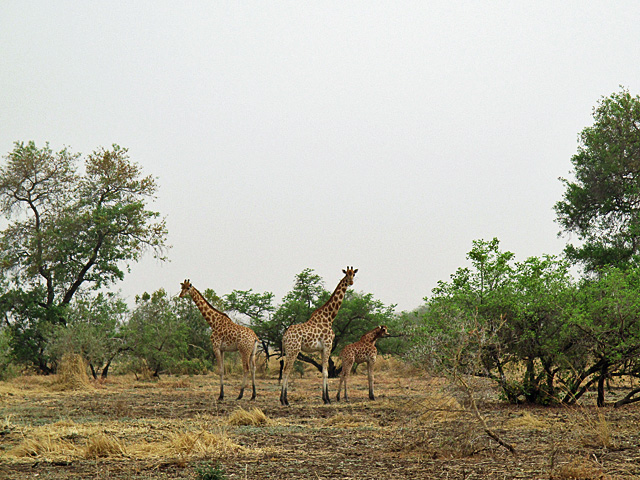 A trio of giraffe pause on their way. (Photo by Susan McKee)

And then there are the giraffes

The species of giraffe found in Chad is the rare Kordofan. It’s estimated there are fewer than 2000 left in the wild. 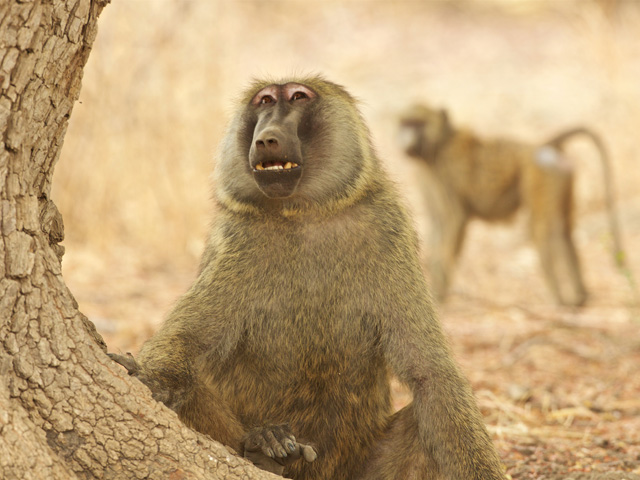 While we watched the baboons, the baboons watched us. (Photo by Michael Lorentz, used with permission)

Not to mention the baboons

The most curious of Kakouma’s wildlife, baboons come the closest to safari vehicles and can be spotted prowling campsites. 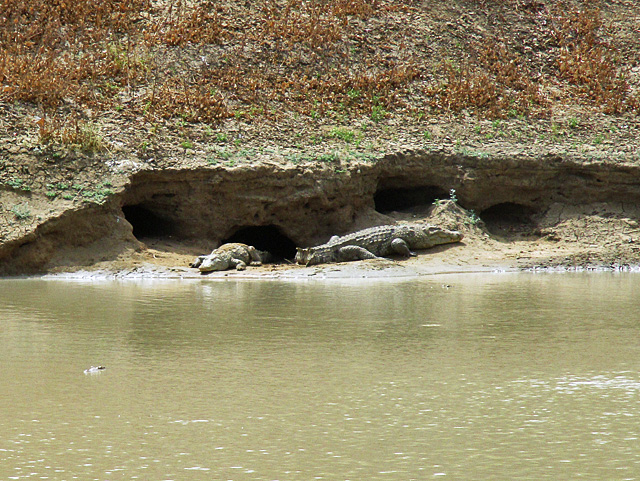 A pair of crocodiles sunning themselves along the river. (Photo by Susan McKee)

Don’t let their somnolence fool you: get close enough to one of these, and you’re dinner. 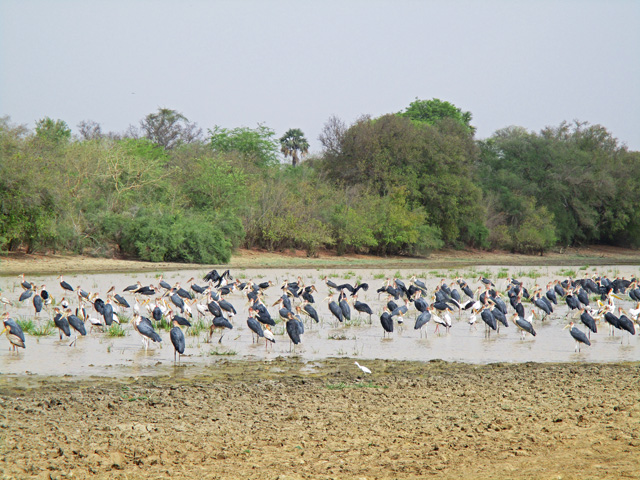 Shore birds fish in the shallows of the drying riverbeds. (Photo by Susan McKee)

But, then there are the birds

Sandpipers, herons, egrets and other shore birds flock to the shrinking waterholes during Chad’s dry season. 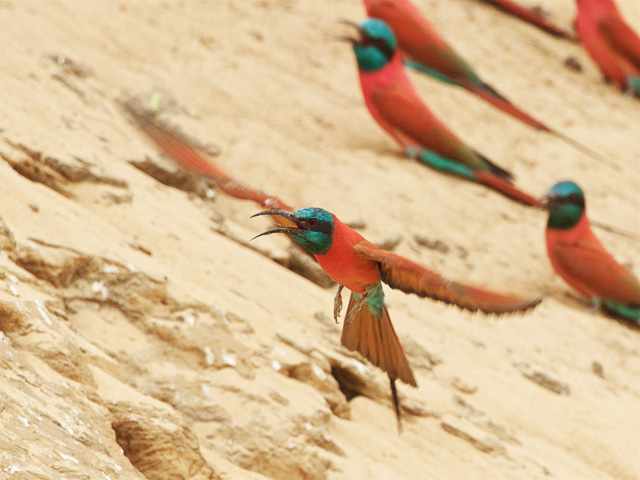 Colonies of carmines nest in riverbanks. (Photo by Michael Lorentz, used with permission)

The Northern Carmine Bee-Eaters, who nest in the riverbanks, are the most colorful of the hundreds of species either living in Zakouma or passing through on migration routes. 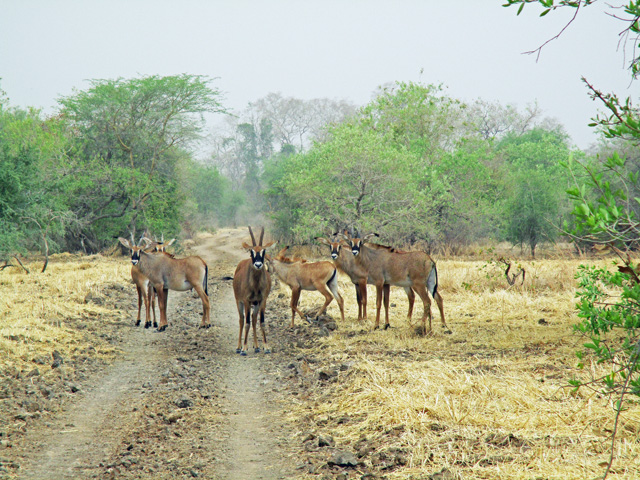 Nope — not rhino but some very curious antelope. (Photo by Susan McKee)

And the fifth of the “Big Five”?

Black rhinos — number five of the “Big Five” — were wiped out in Chad by poachers a couple of decades ago, but African Parks has signed a contract with South Africa to import a breeding population. Stay tuned!

15 Things You Didn’t Know About Chad