The Sanetti plateau, which hovers at an altitude of around 4000m in Ethiopia’s Bale mountains, is the largest Alpine plateau in Africa. It’s a bizarre, half-frozen world of browns and greys, crisp-to-the touch heathers and lichens, soaring golden eagles, and quietly snooping packs of Ethiopian wolves. Not surprisingly, it’s the highlight of a huge park that covers a number of varied eco-systems that include twisted juniper forests and open grasslands filled with graceful mountain nyala and less graceful, but considerably more amusing, warthog. 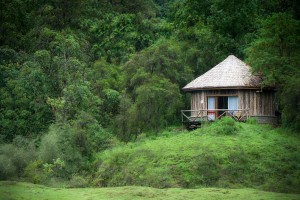 With the high plateau being the big draw for most visitors it would seem natural to find the new, and very impressive, Bale Mountain Lodge situated somewhere on the plateau. But instead it’s located to the south of the plateau, and a lot lower. If, like me, you don’t arrive until after dark when you can see nothing of the landscapes through which you’re travelling, then this decision can seem like an odd one. But wait until dawn and it will all make sense. The lodge is surrounded by the lush, jungly Hereena forest with its bustling birdlife and endemic Bale monkeys and is genuinely beautiful – and much warmer than on the plateau itself.

Bale Mountain Lodge is, quite rightly, being marketed as the first genuine Five Star lodge in Ethiopia. Rooms come in a range of styles from cozy, wood-burner heated rooms that are beautifully decorated, to Tarzan-like wooden tree houses overlooking gushing streams. There’s also a large cottage where groups and families are often placed, but I found this to be rather cold and uninspiring. The lodge has knowledgeable guides who can take you bird watching, walking in the forest, or wolf spotting on the plateau. The management are exceptionally friendly and helpful, and the food is fairly standard meat-and-two-veg African lodge fare.

Although I don’t feel it quite matches up to the top-dog lodges in East and southern Africa, it’s also quite a lot cheaper than most of these, and everyone is absolutely correct when they say it’s the finest place to stay in Ethiopia.