The allure of the Moroccan desert is hard to resist, especially for those who live their lives confined in high-rises in cold places. Which is why the prospect of spending a week on holiday under big skies in wide-open spaces with billowing winds, looming terracotta dunes, and wandering nomads entices thousands every year. So if you’re headed to the desert, why not really dive right in, and sleep there, as well as explore it? If that’s your vibe, here are 8 Morocco hotels where you can literally sleep in the dunes — or in an actual brick-and-mortar room, if that’s what you prefer. 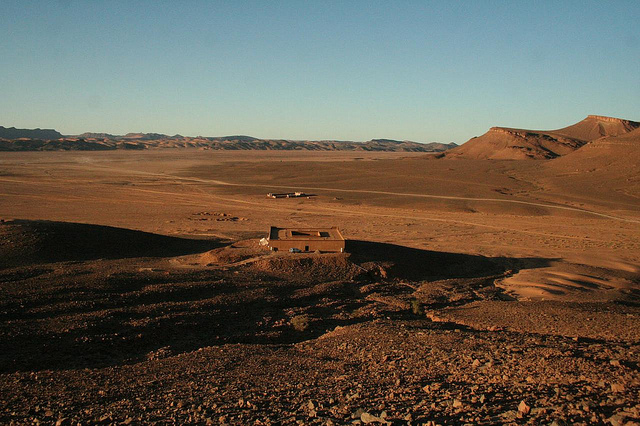 Riad Nomad is the brainchild of Addi Ouyahia, a descendant of one of the largest and most well-known families in Ait Ali Ouyha. His 101-year-old father was one of the first men to trade via camel caravan with Algeria. The riad, located at the oasis of Mharech (not far from Merzouga in southern Morocco), lies at the crossroads of nomadic Ait Atta Berber caravans. It offers Berber food and hospitality in abundance, and the chance to get out and explore the desert in whatever way you desire. 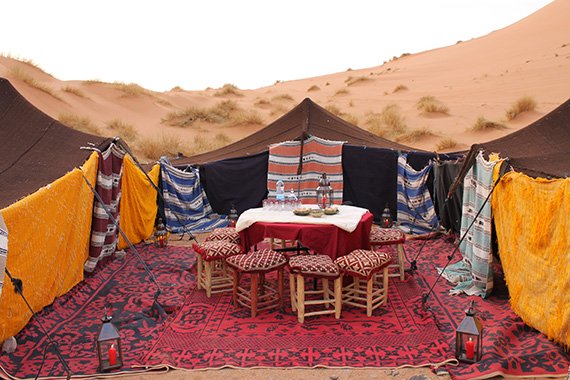 This charming kasbah-style hotel sits in a remote semi-arid region between Zagora and Merzouga, on the old Paris-Dakar Rally tracks. It offers both traditionally decorated rooms and bivouac campsites, where you can sleep on the dunes. There’s also a restaurant serving authentic Berber cuisine, camel rides, and guided excursions to explore the fossil-strewn desert or the charming, tiny village, where life goes on much the same way as it has for thousands of years. 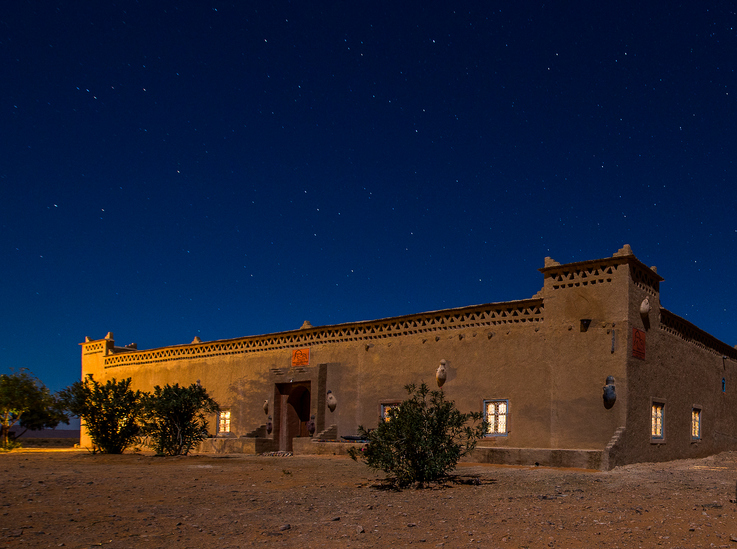 Porte de Sahara is located not far from the previous hotel, in Ouzina. There are several accommodation options here, including a traditional auberge (guesthouse) with rooms arranged along a rectangular cloister overlooking a garden, plus Berber tents where you can sleep under the stars. The 24-hour restaurant offers delicious Berber and Moroccan dishes, and desert excursions cover the mines, ancient engravings, ruins, and small towns of the Sahara. 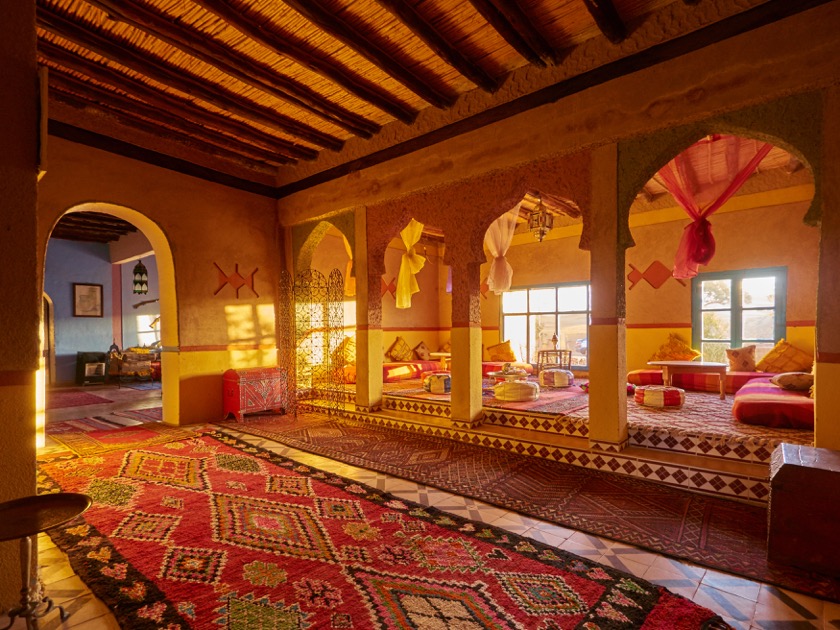 This upscale, 30-room kasbah is located in the Erg Chebbi desert near Merzouga. Here the dunes are an amazing 50 kilometers in length and five kilometers wide, and can reach up to 350 meters in height. Sculpted into beautiful patterns by the unrelenting winds, this is desert architecture at its finest. The kasbah is like a little oasis in this desert. Take a camel trek though the dunes, rent a quad bike, camp in a tent, or go off-roading in a 4×4, then at the end of the day retreat to the hotel’s cool swimming pool and grab one of the international delicacies at the restaurant. 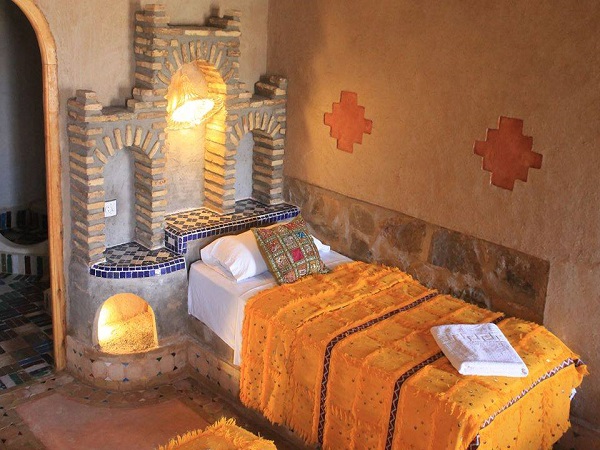 Also in Merzouga, Kasbah Azalay feels a bit like a desert palace. The imposing ramparts and stone walls of the exterior contrast sharply with the fine traditional Moroccan design of the gorgeous air-conditioned rooms, suites, and common areas. The Kasbah is a three-minute walk from both the dunes of Erg Chebbi and the town of Merzouga, but if you don’t feel like venturing out you can simply lounge around the hotel and enjoy the pool or free Wi-Fi . Breakfast is included. 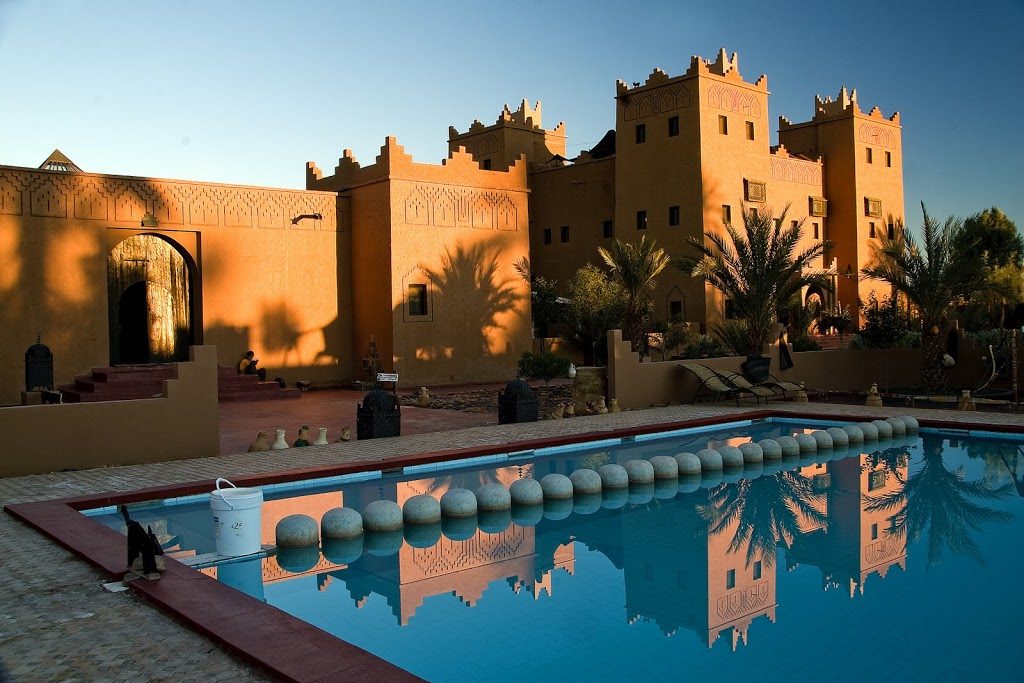 Hotel Tabarkat is owned by a couple from Spain who loved the peace, quiet and beauty of the Sahara desert so much that they decided to call it home. At their palatial-looking hotel, located in oasis of M’hamid, they share their enthusiasm with all who pass through. The oasis of M’Hamid was the ancient meeting place for nomadic villagers in the area, and it’s the last oasis of the Draa Valley, which is the northernmost entrance to the Sahara. This hotel is a little further from the dunes that some of the others on this list, but it’s perfect for those who want a less remote experience. With 22 rooms of various sizes and styles starting at just US$49, the hotel offers good value for money. In addition to a pool, restaurant and free Wi-Fi, breakfast is also included in the rate. Tip: Try to book a garden room — they are larger than the others, and have a view of the immaculately tended grounds. 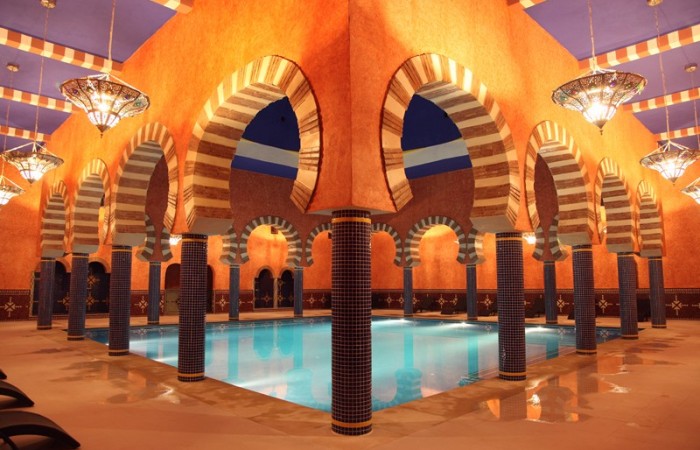 Located just around the corner from Hotel Tabarkat, Hotel Kasbah Azalay offers an even more plush experience than its neighbor. In addition to 43 gorgeous rooms lined with Moroccan tile, a decadent restaurant and a chic bar, the hotel offers a steamy pool and hammam — the ideal way to relax and scrub away the grit you’ll accumulate after a day in the desert. 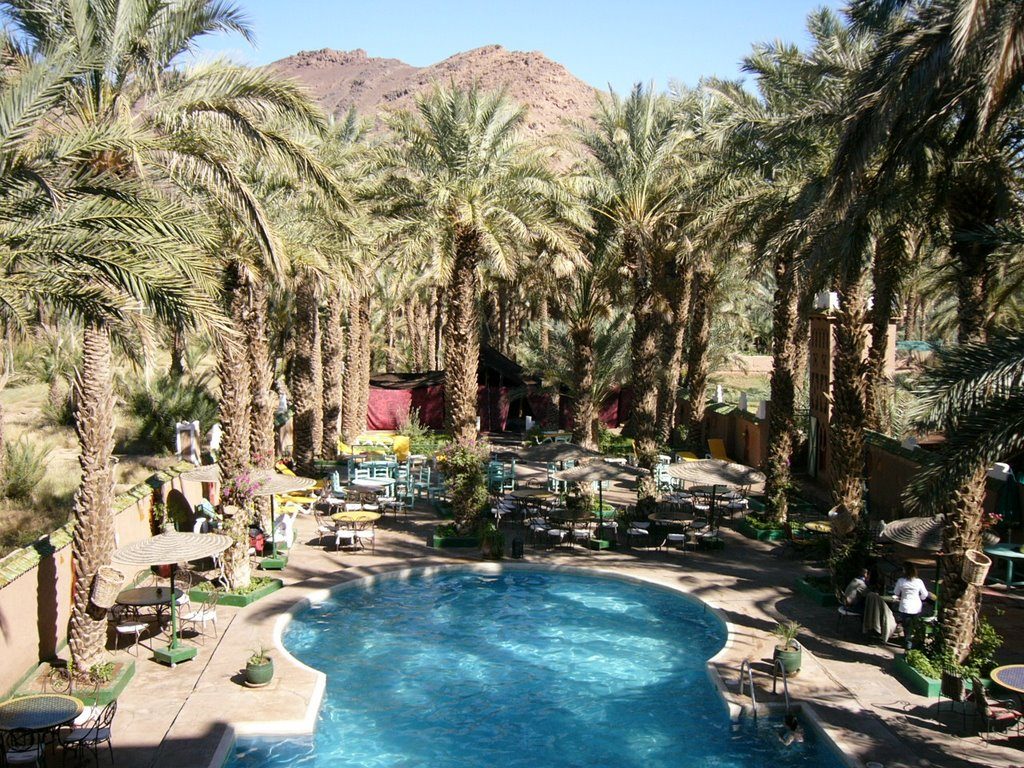 The Draa Valley town of Zagora is the setting for the four-star Palais Kasbah Asmaa. This grand hotel is a pleasure to stay at, on every level. The rooms are filled with traditional Moroccan furnishings, accessories and design details, while the beautiful gardens and huge pool are surrounded by a grove of shady palms. Explore the desert town of Zagora, “the door to the Sahara,” a commercial center where once salt, ivory, slaves, and gold from all over Africa were traded for Moroccan crafts, leather, carved woods. Or venture out further afield to the dunes of Erg Chebbi, Tinfou, Chigaga, Erg Lehoudi, Merzouga, or Er-Rachidia. The Palais Asmaa has a sister property around the corner, the three-star Kasbah Asmaa.

Beyond Merzouga: Cruising Morocco’s Erg Chebbi Dunes
Camel Trekking in Morocco: A Traveler Takes On The Sahara
Dreamy Desolation: 10 Instagrams That Show Off The Beauty Of Africa’s Deserts