Sand dunes rise and fall across Southern Morocco, burning orange as they mark the edge of the Sahara. They roll beyond the horizon, cutting evocative lines and climbing over 300 meters high. Of course there are no roads; just dunes, a lonely palm tree, and a camel caravan silhouetted against the setting sun. Set off from the dusty town of Mazouga, and within moments there’s nothing but a 360º panorama of sand. On a map, these dunes are known as Erg Chebbi, but many indigenous Berbers argue that this isn’t the real Sahara. They’ve nicknamed it the “Coca-Cola Desert.”

Glance at a satellite image and the Sahara doesn’t look accessible: an imperious swathe of yellow stretching across eleven countries and almost all of North Africa. Yet Mazouga is less than 10 hours by bus from either Fes or Marrakech, and a direct daily service takes people straight from the bustling souks to this pristine wilderness. Hotels and camps are spread across the edge of the sand, some even offering swimming pools with a view onto the dunes. So as I relax on a lavish hotel verandah, it all feels just a little too easy. 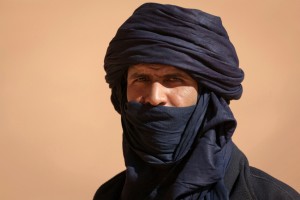 When Berbers head out with a camel caravan, they usually stay away for half a year. “It’s normally a two to three month journey to Timbuktu,” Aghbalu tells me, wrapping an azure headscarf around a face of deep wrinkles. “They trade with the nomads, swapping food for jewelry, carpets, and things they make.” After replenishing in Timbuktu, it’s another two month journey to return back to Morocco. In comparison, some camel trips into Erg Chebbi barely last two hours. They’re not even camels. The one humped local version is actually a dromedary. Aghbalu manages a hotel just outside Mazouga. “Now there are too many hotels” he argues, “so we Berbers laugh and call it Coca-Cola. If you go further south, then some days you’re just walking, walking, walking, without seeing people.”

So when my small dromedary caravan starts its ponderous plod I’m expecting to see hoards of equally snap happy tourists. But sand conceals. Within a few minutes there is nothing but dunes, innumerable peaks swerving and dipping across the landscape. In the early morning they glimmer yellow. Then they start to sizzle beneath the midday sun and a mirage begins to play tricks on the eyes. Afternoons are quiet time in the desert. As we rest beneath a shady canopy a Berber brings out a pot of mint tea. He’s the first stranger I’ve seen since we departed.

Making the Sahara Accessible and Comfortable

Dromedaries are not pretty. Excretions cover thick wooly hair, faces are dominated by uncontrollable chewing, and there’s a look of exasperation whenever I try to stop and take a photo. They’re not comfortable either. The bum might get used to it after a month, but after three hours of dromedary riding I find that sitting anywhere is uncomfortable. Hair mats, dust covers everything, while pockets and socks are filled with the irrefutable Saharan souvenir – sand. Reaching Erg Chebbi with a single bus journey feels like cheating, so this awkwardness is giving the experience a welcome authenticity.

In late afternoon we continue the journey, chasing a drawn-out sunset as the sand makes its provocative transformation from yellow to red. Perhaps there are hundreds of other tourists here, but it’s only at sunset that I spot another caravan on the horizon. Nestled amongst the dunes are private camps, gentle oases for tourists and their wandering rides. Some appear as hostile as the landscape, nothing but makeshift tents and mattresses on the floor. Others indulge and alleviate the desert discomfort; colorful carpets, ceramic toilets, thick cushions, and cold bottles of Coca-Cola (what else?). I’ve been in the Sahara for just one day and my body already suggests it’s enough. So while rolling out a mattress beneath the stars sounds romantic, dragging an aching backside into a luxury bed is a little more pragmatic.

The Costs of Taking a Sahara Camel Trip 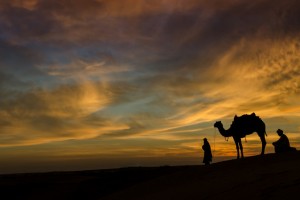 We walk four hours the next morning, departing at sunrise and don’t see anyone until the line of hotels comes into view. It’s even more painful today, and my upper legs are beginning to arbitrarily throb. Yet every angle offers visual euphoria, and 24 hours immersed in Erg Chebbi leaves an enchanting impression of the desert; the subtle color changes, admiring sand bathed in moonlight, appreciating the sun’s relentless power. I even grow to enjoy my dromedary’s company, although I’m going to persist with calling it a “camel trek.” Dromedary trekking simply doesn’t have the same ring to it.

These camel treks start at around US$25 per person per day, including all meals. The Sahara version of five star can be found for just US$40 a day. However, the cost depends heavily on bargaining and commission. For the better prices, book a trip directly from Mazouga, rather than with an agent in Marrakech or Fes. There’s no need to pre-book and a trip won’t sell out. After all, people from the desert are as resourceful and impromptu as they come. It’s also possible to arrive in Mazouga and wander into the dunes, armed with little more than drinking water and a sleeping bag. Towering 200 meter plus dunes can be found in barely a 30-minute walk from the hotels.

Erg Chebbi isn’t a month long nomadic expedition. I didn’t drink mint tea with a nomadic tribe or start using the sun as a compass. This was little more than a glimpse. Yet I don’t have the guts or the time to wander through the middle of the Sahara, so Erg Chebbi’s accessibility is its prime attraction. For minimal money and effort, you can lose yourself in one of the continent’s most surreal environments.