While the official language of Cape Verde is Portuguese, most people speak Kriolu in their homes and on the street. Kriolu is the “unofficial official” language of Cabo Verde. Its origins are ancient, dating back to the 15th century.

Kriolu was at first a pidgin language, based on Portuguese, in which business was conducted. Africans who were brought to Cabo Verde as slaves used the pidgin, which then developed into a fully formed “creole” language. 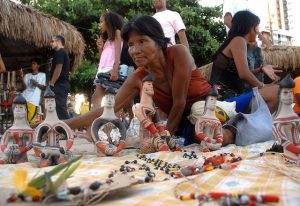 When the slave trade ended, Portuguese remained the official language of Cabo Verde (and even today it is used in classrooms, the government, and in the media). Yet there are many Cabo Verdeans who do not speak Portuguese fluently. This is because Kriolu is the primary language in the lives and homes of most average people.

Cape Verdean creole is one of the world’s strongest creoles, but there is pushback from certain sectors of Cape Verdean society, and the divide between Kriolu and Portuguese can create problems in public spaces.

“During slavery you had people speaking Kriolu, and it started to grow,” explained Prof. Manuel Da Luz Gonçalves, an expert in Cape Verdean Kriolu. “When the Portuguese realized that the language was growing so fast and [the language] was becoming so powerful they said ‘well let’s reverse this and teach Portuguese.’ Then Portuguese became an elite language, the language of the educated, so you had people who didn’t speak it, especially people in the fora — the countryside. And because of that if you speak Kriolu you are put down. Even today I have seen people go into an office and if they spoke Portuguese they were looked well upon, but if they spoke in Kriolu it is the opposite. In fact, they call Kriolu ‘the kitchen language’ and Portuguese ‘the living room language.’ But what’s interesting is that the political campaigns are all done in Kriolu, even the church when they ask for money, they ask in Kriolu.” He adds with a laugh, “What’s amazing is that when you need direct communication with the people, it is done in Kriolu.”

“The first language [children] hear at home is Kriolu,” he continued. “When they go to school, they are very affected and don’t want to really speak much in class because everything is in Portuguese. Instead, Portuguese needs to be taught as a second language and more recognition given to Kriolu. It is my experience when you allow kids to speak in Kriolu they even talk more and more and that’s a good thing.”

There is a great Kriolu debate: Should it become the official language of Cabo Verde? If so, which Kriolu? There are two branches of Kriolu: the Southern islands (Brava, Fogo, Santiago and Maio) speak Sotavento Creole and the Northern islands (Boa Vista, Sal, São Nicolau, São Vicente and Santo Antão) use Barlavento Creole. On top of this, each of the inhabited islands use a different dialect (variants).

Making one of the versions of Kriolu the official language could cause an uproar. “It’s a question of pride,”  notes Gonçalves. “Each island holds its own Kriolu very dear, so it could be challenging.” But Gonçalves says he sees the dialects merging, as there is more movement between the islands, especially with many people resettling on Santiago for work.

As the language evolves, the interest in Cabo Verdean Kriolu is growing. So much so that Gonçalves identified the need for a dictionary — and he wrote the first one. The Capeverdean Creole-English Dictionary, published by Mili-Mila, includes more than 40,000 words, and is graced by gorgeous photography of Cape Verdean people, artifacts, and landscape.

The Capeverdean Creole-English Dictionary was a major undertaking. A project done with his daughter, Liza Gonçalves, the dictionary took 10 years to complete. “People ask me why I kept at it after 10 years, but it was very worthwhile. I got to work with my daughter and great photographers. And, it is to me as a Cape Verdean immigrant my contribution to honor the language and culture,” says Gonçalves, who adds with a smile, “I also wanted to prove all the people who said it couldn’t be done wrong.” 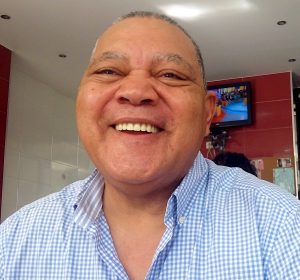 You could call Prof. Gonçalves a Kriolu activist. He loves Cabo Verdean Creole and wants to see it recognized and expand. In fact, he has made career out of promoting the language. He has lectured on Cape Verdean culture and language worldwide, is a professor who has taught Kriolu at Boston University, Rhode Island College, Bridgewater State University, and UMass Boston, as well as at the Dorchester Center for Adult Education. He also worked as an interpreter, consultant, presenter, and organizer for the Cape Verdean Celebration at the Smithsonian Institute’s 29th Annual Festival of American Folklife in 1995. His efforts have been honored with the Medal of Volcano by former President of Cape Verde Pedro Verona Rodrigues Pires and Medal of Merit as the President of the Cape Verdean Creole Institute by the Ministry of Culture of Cape Verde.

Before writing the dictionary, Gonçalves to co-authored and published Pa Nu Papia Kriolu, a learning language manual. Gonçalves knew there was a market for a dictionary based on the results of this book, for which he did a limited print run and sold out. “People are still looking for ‘Papia Kriolu,’” says the professor. His dictionary will reach a larger number of people, from tourists to Cabo Verdean Americans to linguists to people just interested in Cabo Verde.

Obviously, Koulu is alive and strong. “We were under Portuguese rule for more than 400 years and it didn’t die,” says Gonçalves. “And now people are paying attention to it. There are more studies, more writings, more poetry, more music, more translations. Kriolu is not under one of those so-called engaged languages lists…I don’t think Kriolu will die out, on the other hand it will continue to progress, to be promoted by people, by linguists, singers, songwriters, poets.”

A sampling of Kriolu words: