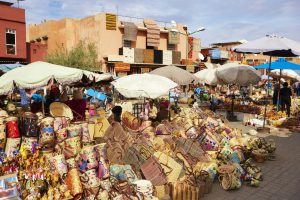 All of my predictions turned out to be correct, especially the latter. But I learned there’s a reason Marrakech is touristy: simply put, because it’s fantastic. It’s similar to New York or Rome in the way things are geared towards tourists — but there wouldn’t be tourists to begin with if there wasn’t something worth seeing. And there’s plenty worth seeing. Anyway, if you prefer authentic and grungy, I suppose there’s always Philadelphia, or Tangier.

I arrived in Marrakech via Casablanca. As my train edged closer to the city, I could see what looked like a walled fortress in the middle of the desert. The buildings appeared burnt red and beige, as if the city had been roasting in a giant kiln for hundreds of years (which it technically has been). By the time I stepped off the train, I was feeling somewhat nervous, as I had just spent a week in Casablanca and Rabat, and neither city had been what I expected. Rabat was kind of a boring letdown, and although Casablanca was dense and busy, it didn’t really steal my heart the way the movies said it would. So off I went, hoping my third Moroccan city would be a charm.

As I began to explore, the first thing I noticed was the biblical quality of the city. Then came the sensory overload. Outside the city limits there’s nothing and no one, but within the city it seems as if everyone in Morocco is packed into just a few square miles.

Despite the crowds, it didn’t take very long for Marrakech to work its magic on my heart, an infatuation that was fed by the Marrakchis. The warm reception I received from casual strangers surpassed that of any of the other cities I had visited. Strangers helped me out with directions when I was lost, including a very patient waitress who showed me the way multiple times. I was immediately impressed with their genuine sincerity and willingness to go out of their way to help a total stranger. Even though there was always some form of a language barrier, I could sense their kindness.

As I continued to wander the streets, I realized that nothing had prepared me for what I was about to see in the city center. Of all Marrakech’s attractions, the iconic Djemaa El Fna is the star of the show. It’s famous for its monkeys, hypnotic snake charmers, vivid orange carts, curvy belly dancers, bombastic Berber singers, and most of all, the gigantic selection of food stalls with towering clouds of steam pouring out.

The mouth-watering marketplace, much like the hipster food truck fairs in Portland, is a popular hangout with locals and tourists alike. Except instead of vegan meatballs, they serve spleen, cow cheeks, snails and camel meat, making it a haven for adventurous eaters. If animal intestines aren’t your thing, there’s also great shwarma and tagines. I took a chance on a few mystery meats, and they all turned out to be delicious, without any sickness involved. The orange juice carts are also a dream come true. Having lived in both California and Florida, I know good oranges when I see them, and the bright little orange spheres in Morocco outclass the ones in the US. Here oranges receive special treatment: streets are lined with orange trees, the scent wafts through the air, and vendors have stacks of them up to the sky. In between food stalls are talented snake charmers, who entertain and mesmerize while you munch on your snacks. I saw one cobra try to take a bite out of a guy’s headpiece then make a jailbreak towards the crowd before being grabbed — so I’m not sure how charmed the snakes actually are.

But there’s more to Marrakech than just food and snake charming. Imagine wandering the narrow streets of Venice, but throw in some mopeds and even more people. Then put a ceiling over your head and imagine you are in a maze dodging traffic, and you have an idea of what it’s like to wander around the non-touristy parts of the Medina. As I moved through the alleys, it seemed like anything and everything could be had for a price, from dyed leather goods, to hand-painted ceramics, to gleaming brass, Berber scarves, hookah pipes, pungent spices, and honey-coated pastries. At a certain point it all just started to blend together into an endless haze, and I entered a trance-like state, absorbed in the moment.

A lot of Marrakech is rough and chaotic, but it’s not without its calm, affluent parts. I loved the exquisite Majorelle Gardens, which were once the home of famous fashion designer Yves Saint Laurent. He had a seriously swanky pad which is now open to the public. Another can’t-miss spot is El Badi Palace. It was built in the 1500s and used to be filled with gold treasures and fine jewelry, but it’s now just ruins and a museum, and turns into a nightclub once the stars come out. (I have no idea how good it rates, but it would probably be fun to party it up in an ancient palace.)

I was impressed by the nature here too. Just 45 minutes from the city, the Atlas Mountains were impossible to miss and the jagged purple peaks looked like something out of an Ansel Adams photograph, only far more exotic than Yosemite could ever hope to appear.

When it came time to leave, I felt uneasy, and when the plane roared and lifted me off the tarmac, I felt a sense of sadness for having not stayed longer. If there’s such a thing as feeling homesick for a new city, Marrakech instilled that in me, and it completely won over my heart.

I still think about walking through the city, getting lost over and over again in the streets, and the amazing people I met. I think about the smiling taxi drivers, the smell of spices wafting in the air from the cooked lamb heads, the women with dark hair peeking out from underneath their hijabs. But most of all, I think about the genuinely contented expressions on the faces of the locals, as if they know the secret recipe to happiness.

I think their secret is simply that they get to live in Marrakech.