Rudyard Kipling wrote that the first condition to understanding a foreign country is to smell it, and never has a place smelt more distinct than Zanzibar, the aptly named Spice island. Over the years warm monsoon trade winds would bring sailors from as far off as Asia drifting in with the tides, and the island’s tropical shores are now a mecca for sun and sand seekers. 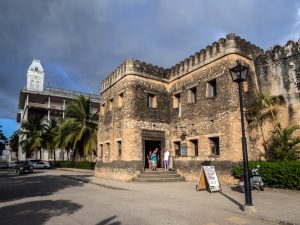 Zanzibar and Tanganyika formed a union in 1964 and together they became Tanzania. Although this relationship is not without its hiccups, a relative peace permeates the shores of both mainland and island. What was once one of the main slave trading ports in East Africa, Unguja, widely known as Zanzibar, has over the years become an amalgamation of east and west, where a tapas bar sits neatly next door to a 1000-year-old Persian house.

Here the air is thick with hibiscus and frangipani. As you stoop low through intricately carved doors the scent of clove, cinnamon and curry leaves fills every molecule of air, and if there is a pot of brewing coffee and a comfortable cushion, expect to lose yourself for hours. Stone Town is a living monument to the some 20,000 years that the island has functioned as a port. The Mashariki Palace hotel, the residence of the sultan of Zanzibar some 200 years ago, stands overlooking the nearby old fort and out onto the sea of dhows and ferry boats coming to and from the mainland. Winding alleyways stretch the length and breadth of this traditional Swahili UNESCO World Heritage site; ancient forts, Old Arabic houses and sultanates are tucked behind corners, waiting to be stumbled upon. Intimidating to venture into at first, nothing is better than getting lost in the streets on purpose. Wander or amble, but do whatever you need to do just get out into the streets, because Stone Town is not shy to call out from its doorsteps, advertising all manner of trinkets and treasure troves to the passing traveller. A day is well spent getting lost amongst the Tinga Tinga paintings and the high fashion of Doreen Mashika, or spend an evening along the promenade watching a world of spicy, flavorful food preparation at the Darajani and Forodhani food markets. 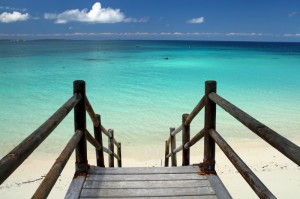 Outside of Stone Town, Zanzibar is still fairly underdeveloped, with only one or two main roads connecting the North and South sides of the 85 km island. But once you hit those rocky coral back roads there is nothing but open skies and bright, white sandy beaches between the villages. Azure waters lap up against wooden walkways of dozens of hotels that poke put of the palm-fringed coastline. Each section of the island can offer up a beach culture to suit all tastes, whether you want sheer isolation and separation from the crowds, or to mingle with waves of buzzing, coconut sunscreen-smelling people ready to dance into the dawn.

For such a small place, Zanzibar really knows how to show off its natural resources. A short boat ride from Stone Town lie some of the most beautifully intact coral gardens that the island has to offer. Watched over by a dedicated team of eco-guards who patrol the small section of their waters day and night, this piece of the natural world nestled alongside Chumbe Island will hopefully thrive for future generations. A warm breeze moves through the beach and as the sun touches the horizon, giant coconut crabs gleam in their bright orange shells — a real life adventure in living in a place where you can be the king of your own private island.

The night sky folds itself over the rooftop restaurants and the sounds of the evening call to prayer reverberates through the winding streets. Taraab music drowns out the chatter of tourists in outdoor bars, and locals converse away from the heat of the day on stones benches called barazas that line the exteriors of the older houses. The streets might not be arranged in any distinct order, but this is not an island to worry yourself with losing your way, because you never know what might be waiting for you around the next bend.