I’ve visited Victoria Falls three times now on three separate trips. I’ve seen the view from the bottom of the Zambian side, and the top of the Zimbabwe side. I’ve seen the falls by the light of a full moon, and I’ve twice rafted the mighty Zambezi River below them. But no matter how many times I witness “The Smoke That Thunders,” I still get butterflies upon first hearing the roar. There is just something undeniably magical about this waterfall that forms the natural border between Zimbabwe and Zambia, that no matter how many other spectacular falling bodies of water one has seen, does not diminish the awesome wonder of Victoria Falls. 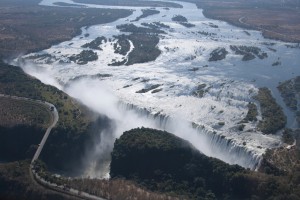 And I’ve seen my fair share of big waterfalls. I’ve been to Niagara Falls on the U.S./Canadian border, and I’ve witnessed the world’s widest single-drop waterfall, Kaieteur, on the Amazon in Guyana. Both were impressive in their own right, but neither had the effect on me that Victoria Falls does. Maybe it’s because the falls are in Africa, a continent I’ve been lucky enough to visit on 10 separate trips over the years, but I don’t think I’m alone in my awe – this is one of the seven natural wonders of the world, after all. And I’ve never met anyone disappointed by this rumbling, rushing waterfall. It’s no wonder David Livingstone chose to have his heart buried at the Zambian side of the falls.

But it’s not just the waterfall that I love: I also love the town of Victoria Falls. It’s a quirky little place, and always has been. It’s a hub for adventure travelers and expats, and up until a few years ago, the only place in Zimbabwe where any tourists were actually traveling (the government, aware of the power of the Vic Falls tourism economy, made sure this town had electricity, police patrols and even fuel during the country’s darkest days in 2008). As a result, Vic Falls has a certain buzz to it that’s contagious. There is just so much to do, from an adrenaline perspective, and after doing it, there are plenty of bars in which to rehash the experience with new friends later in the night. When you spend a day rafting some of the world’s most dangerous whitewater with a small group of strangers, bonds are formed that cannot quite be explained, and for a few hours after the trip at least, the friendships become intense as the adventure highlights are committed to memory.

The town is also charming, with a range of hotels and restaurants to choose from. While Harare has just as much diversity when it comes to eating, drinking and sleeping, unlike Harare most everything in Victoria Falls can be walked, and security is tight, so you’ll never feel unsafe. For sleeping, I love the Victoria Falls Safari Lodge. It’s located a few minutes’ drive outside of town, but they operate a free shuttle service into the center and back, making it convenient whether or not you have a car. The only sunset facing hotel in Victoria Falls, it is the best spot in town for sundowners on their patio overlooking an active watering hole. The sunsets here are stunning, stretching on for ages, and turning the sky a melage of colors as elephants and antelope wander up to the water for a drink of their own.

And I love the eclectic range of restaurants found in this town, where you can dine on everything from tapas to burgers to traditional Zimbabwean fare. A night at the Boma should be mandatory for any Vic Falls itinerary, and even though this restaurant plays up the traditional Zimbabwean village experience with everything from draping guests in a traditional colorful “intsaru” (literally wrap-up cloth) upon entering, to scantily clad native dancers performing during the buffet dinner, it isn’t cheesy, and even my Zimbabwean friends enjoyed an evening here. 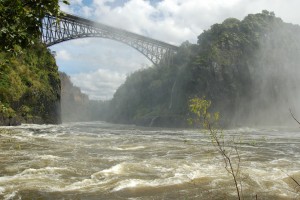 But back to the Zambezi River, because at the end of the day this is the real reason why everyone comes to Victoria Falls. I love visiting most at full moon. It’s a rare and beautiful experience that truly should top any African travel bucket list. When the skies are clear, the way the moonlight reflects off the water is a powerful visual that’s aided by the auditory track of roaring thunder. Without a quality camera, it isn’t all that easy to capture, so you’ll be forced to put the phone down for once and really just commit the experience to memory, like in the “olden days” of travel. Take some time to just sit quietly and absorb the music of the falls at night. Trust me, after doing so you’ll understand why so many people fall in love with the Smoke That Thunders.