After spending four nights travelling through Savuti in Botswana, we set off to dive deep into the Okavango Delta. After already having had a few of the most amazing and thrilling days and nights in Savuti, a game reserve higher up in Botswana, I thought we had experienced it all. We slept in the middle of the wildest bush I have ever experienced (only three of us, a tent and our open vehicle), in the middle of the local trekking ground for a herd of elephants by day and hyenas by night. Not to mention the nightly chorus of lions, leopards and trumpeting elephants to fall asleep to, I really thought we had gotten as close to the wild Botswana bush as we could. 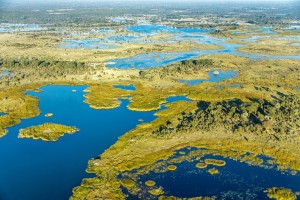 But then we arrived on the edge on the Okavango Delta, a secluded spot where our speed boat was going to pick us up to take us to the island where we were going to spend the next few nights. I instantly knew that this trip was going to become even more breath-taking. I usually research the places that I travel to beforehand, so that I have some sense of what I’m getting myself into. I hadn’t done this before our trip into the Delta, and I think it made the whole experience even more amazing.

I had no idea that the Delta was made up of thousands of canals. It’s quite obvious, I know, but I was completely surprised and amazed when we hopped onto the boat and it started weaving through the canals. The boat captain, obviously knowing the area like the back of his hand, whizzed through the waterways, stopping only to check out a little croc that had popped his head up, and later an elephant that was wandering through the reeds. We had no idea what was going to appear around each corner, and held our breath in excitement. 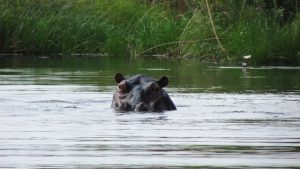 Hippo in the Okavango Delta (photo by Bridget Williamson)

It wasn’t long before the winding canals opened up into a large open mass of water. We were in the middle of the Okavango Delta, in the middle of the water, where hippos and the largest crocodiles you will ever see roam. It was terrifying, thrilling and so exciting all at the same time. I was instantly in love.

The Okavango Delta will suck you in to its raw splendour, colossalness (a word I made up to show the sheer size of the water mass), truly wild wildlife, and adrenaline-pumping unpredictability. Never have I been so on edge and alert, yet completely relaxed and adventurous as when we were on the island in the middle of the Delta. So adventurous, in fact, that I found myself following an elephant on foot, getting to within a meter of him. My heart was racing, but I was completely relaxed. Then there was the afternoon when we decided to go swimming in the Delta (this is illegal, so don’t try this yourself): we were splashing around in the playground of hippos and crocs and who knows what other dangerous animals without a care in the world. Of course we were alert and aware of our surroundings, but also so carefree.

The Delta is rich in wildlife, from hippos, crocodiles, elephants, buck, vast birdlife and even a few leopards that hop between the islands. While sitting on a boat in the middle of the open water, you never know when or where a hippo is going to pop its head out and give a loud snort. You’re just hoping that it’s not too close to your boat. Then there are the crocodiles chilling on the floating islands, or just below the water’s surface with only their nostrils sticking out — crocodiles that have been reported to get as long (if not longer) than a speed boat. We came across one not far off from the boat we were in.

The elephants of the Delta are the best of all. Watching these beautiful, immense animals swooshing through the water, going island to island, is a sight to behold. We unfortunately didn’t get to see a herd crossing through the open water, but they are known to walk underwater in the deep sections, jumping up for air along the way. I still hope to see this one day.

Then there’s the birdlife: the much-adored African Fish Eagle accompanying you along every water safari; the trees lined with marabou storks; and the 400 other bird species in the area.

Water safaris, hippo spotting, bird watching, elephant tracking, star-gazing, sunset admiring and pure relaxation. This is what the Okavango Delta is about, and why I love it so much. The one place in this world that is sure to make you feel alive, whether it’s from the adrenaline pumping through your veins while treading through crocodile ridden canals or being swept off your feet by yet another amazing sunset.