As travel surprises go, you can’t beat Cape Town. Tourists touch down at the airport, clutching their valuables and expecting a wild slice of Africa. The start of the journey into town doesn’t exactly shatter this preconception, as the N2 highway passes the townships of the Cape Flats, with their jumble of shacks, bungalows and state-subsidised ‘Mandela houses’. Groups of scantily clad boys happily kick a football or splash in a rainwater pool, as six lanes of cars surge past – a good example of the rainbow nation’s contrasts between African and Western lifestyles. 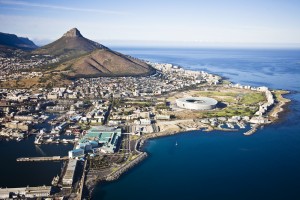 Then you enter the city proper, perhaps on the mountainside rollercoaster of De Waal Drive, which crosses the lower slopes of Devil’s Peak with Table Bay and the harbour below. Finally, you round a corner and there it is, one of the world’s most iconic sights: Table Mountain. Beneath the cable car climbing to the 1000m-high plateau, well-to-do neighbourhoods pour into the aptly named City Bowl, sloshing up the sides of the sphinx-like Lion’s Head and Signal Hill. As the buildings run towards the sea, they become the towers of the CBD and the market complexes and museums of the V&A Waterfront precinct.

This town between mountains and ocean is unarguably one of the world’s most beautiful, from the fynbos growing on Table Mountain to the beaches fringing the Atlantic suburbs. And once visitors have gotten used to this jaw-dropping setting, they receive the next surprise. Cape Town is not an African city, but, true to its position on the maritime trade routes of yore, a cosmopolitan town with a European attitude. The average Capetonian would not be caught dead in khaki; the only wall-mounted antelope heads you will see are made of beads; and the local motorists charge around like hot-blooded Mediterranean taxi drivers. 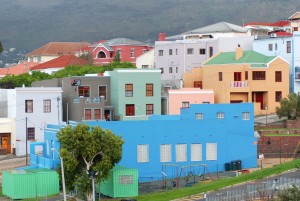 Furthermore, the local lifestyle certainly gives the average European metropolis a run for its euros. In this sunny nirvana at the Cape of Good Hope, you can enjoy all the culture and entertainment of a Western city, for a fraction of the price and in the Cape’s Mediterranean climate. Local evenings and weekends are filled with markets serving the products of the fertile Cape countryside; tastings on wine estates in Constantia and the Cape Winelands; full-moon walks up Lion’s head, following a stream of head torches; surfing, kitesurfing, paragliding or hiking Table Mountain’s footpaths; hitting the bars, browsing Woodstock’s boutiques or touring the galleries; and picnics on the beach or at Kirstenbosch Botanical Gardens’ sunset concerts. No wonder Capetonians obsessively Instagram, post time-lapse clips and pay social-media homage to their beautiful home. 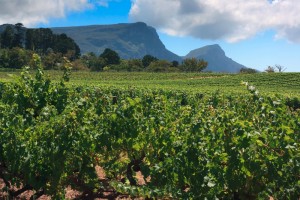 When I first visited Cape Town, I had already lived in Sydney and Vancouver, so I was a tough crowd to impress. I caught Shosholoza Meyl’s overnight tourist-class train from Johannesburg, breakfasting as we descended mountain passes and whooshed through the Winelands. For the final hour of the journey, we could clearly see Table Mountain ahead, a sight that had every last cooped-up passenger leaning from the carriage windows.

It was 2008. The rand was in freefall; a program of rolling blackouts, known as ‘load shedding’, had been implemented to resuscitate the national power grid; and speculation surrounded the likely performance of the 2010 World Cup. I checked into a backpacker hostel with Xhosa beadwork in reception and a vibrant mix of black, white and coloured Capetonian employees leading forays to Long Street’s bars. That night, I drank beer by the pool with the owner, gazing at the spot-lit Table Mountain and listening to her tales from the building’s previous incarnation as a squat. It was a classic introduction to the happy-go-lucky town that the rest of South Africa is ever-so-slightly jealous of.

The owner suggested I join the party and move here, an idea I quietly dismissed; I was trying to settle myself in London after a peripatetic period, and, besides, Africa was surely no place to live. Nonetheless, at a pedestrian crossing the following day, I watched a girl drive an old-school VW Golf up the steep street, and I fantasised about living a slacker existence in this laidback town – perhaps with that girl. One week and an international flight later, I bleakly waited for the bus outside my local tube station in North London, still clad in shorts and sandals. Two years after that, as the final vuvuzela blew in the World Cup, I was back in Cape Town for good. 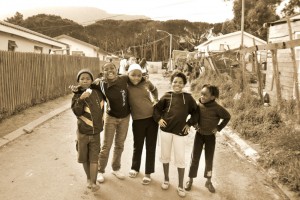 Living here is, of course, very different to passing through wearing a traveller’s rosy spectacles. The rand is worse than ever; we had load shedding again this year; the optimism of the World Cup has faded; and Jacob Zuma’s ANC government is increasingly alarming. My story is less common than those of the South Africans who ‘pack for Perth’ and emigrate to Australia, New Zealand, the UK or Canada, driven by the high crime rate, economic uncertainty and the vagaries of life in a developing country. Certainly, living behind security gates, high fences and burglar bars takes some getting used to. But it is a trade-off with all those blue skies, beaches and wine estates on your doorstep. Even on a pragmatic level, the existence of a professional population with middle-class expectations in an African country has led to excellent, relatively affordable private healthcare and education. For all these reasons, Cape Town has a sizeable expat community; I know several Brits, continental Europeans and Americans who are here for the long haul. 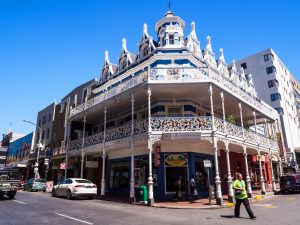 Another aspect of Cape Town that takes some getting used to is its social makeup. As in every corner of this rainbow nation with its 11 official languages, the city’s different racial groups do not always coexist easily. Cape Town, with its European flavour and its history as a Dutch maritime refreshment station and British colonial capital, is oft-criticised for failing to embrace the new South Africa. Black critics say they feel uncomfortable and excluded in the city and university campus, but their views are a little partisan. Not only has Cape Town long been one of South Africa’s most liberal enclaves, under apartheid and into the present, but it has a unique demographic mix. The Western Cape is one of only two provinces where coloured people, rather than black people, are in the majority. Given that coloured people have risen to the top throughout Cape Town – not least the city’s mayor, Patricia de Lille – accusations of a lack of progress post-1994 are unfair.

Nonetheless, the issue remains a hot potato. In April, the ‘Rhodes Must Fall’ protesters managed to get a statue of the British colonialist Cecil Rhodes removed from a prominent position at the University of Cape Town. For incomers, the accepted norms of day-to-day life in this multicultural but fragmented society can also be jarring. For example, while they live on the African continent, the only contact the average white housewife in the leafy southern suburbs has with black Africans may be their maid or nanny, and petrol-pump attendants.

Given the troubling aspects of life in an African country, Capetonians are always ready to carpe diem to the max and make the most of their sublime city. Hike up that mountain after work, Instagram it later and tomorrow be damned. Who cares if the economy crumbles, if you can spend the next few hours drinking a chilled bottle of white on a Cape Dutch wine estate. Capetonians deeply appreciate the sights, sounds and quality of life in their city, and it is hard not to be swept up in that enthusiasm. The singular mix of the uncertainty of South African life and the wonderful lifestyle enjoyed by many here, set against such dramatic scenery, somehow brings everything into focus and creates a unique intensity. So get ready for Cape Town to take you by surprise: with its African joie de vivre and European pizazz, it’s the historic Mother City at the end of the world and a place that everyone falls in love with.