When friends of mine visited Accra recently, they complained about the smog, the chaotic sprawl and, most of all, the abysmal traffic. For this reason, most tourists don’t stay too long. It’s usually a brief stop on the way to somewhere more diverting – the old slave forts of Cape Coast and Elmina, for example, or the rainforest canopy of Kakum National Park. 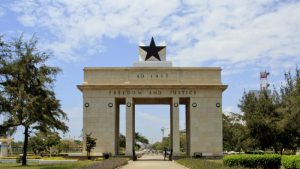 All of the hassles of Accra are real, yet some of my most potent memories of the city are of watching life unfold from the backseat of my parents’ car – driving through Nima, the city’s poorest district, a maze of tightly packed alleyways that pulsates with life and noise and smells; stopping at the roadside for freshly barbecued corn, which my brother and I would devour on the backseat; or gazing up at the concrete hulk that is Independence Arch – a modernist monument to the county’s break from British rule.

Home was the wide streets of the University of Ghana campus at Legon, where we would spend hours investigating the bush at the end our garden, climbing trees and poking at the ‘snake pit’ – where once, a python so large was discovered, a team from Accra Zoo came to collect it. That was around the time of the 1979 military coup, led by subsequent president Flight Lieutenant Jerry John Rawlings; and I have hazy memories of curfews, armed men and the distant sound of gunshots – as well as the time that a family friend brought an entire butchered cow to our house, quite a feat at a time of shortage.

Although I haven’t lived in Accra for many years, I return often, to travel and to visit family. It’s different city today, and has been peaceful for decades, in contrast to several neighbouring capitals. On the eve of the 50th anniversary of Ghana’s independence from Britain, I felt a surge of pride as I danced in a sea of red, gold and green – the colours of the nation’s flag — as thousands of my fellow Ghanaians celebrated how far the country had come. And despite some economic woes — currency depreciation and rising inflation among them — there’s still much to celebrate, and many places in which to do so.

Accra’s vibrant community of professionals and creatives, joined by diasporans and expats, pack into an ever-increasing supply of hip restaurants, bars and shops. Busy Cantonments Road in Osu, known to everyone as “Oxford Street,” is popular, and a good starting point. Chic boutiques such as Christie Brown (womenswear) and La Maison (stylish homewares) jostle for space against hawkers and traders from across Ghana and West Africa, selling everything from knock off sunglasses to fine Tuareg jewellery. 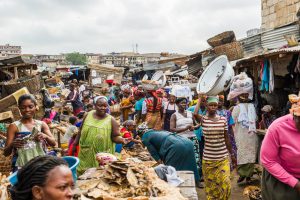 You could eat top-class sushi, Italian, Thai or Ivorian, among many other options, before moving on to cocktails at a cool joint such as Firefly Lounge Bar; or listen to live music at nearby +233 Jazz Bar and Grill, one of the city’s hottest performance venues. Alternatively, you could sit at plastic tables by the roadside, to a soundtrack of local hits, while eating fufu and groundnut soup washed down with a Club or Star beer.

Airport Residential Area, desirable when I was growing up and still so today, is home to of-the-moment Santoku Restaurant & Bar, with its sleek designer interior and impeccable Japanese food, as well as Vida e Caffè – a lively coffee shop just like you’d find in London or New York.

Tourists head for the seafront Arts Center market for their arts and crafts but I’ve always had a soft spot for nearby Makola Market – a dynamic, rambling and noisy collection of stalls selling clothing, food, electronics, kitchenwares and many other things besides. The baskets of giant snails I so vividly remember are still there, but are not as strange and fascinating as when they were almost at eye level.

The beaches where I played as a girl haven’t changed much. Labadi beach still fills up with families and young people at weekends, who settle in to spend the day playing in the shallows of the sometimes treacherous surf, eating freshly grilled tilapia or suya (spicy sticks of skewered meat) to the blaring sound of hiplife, highlife and reggae.

For those that want to escape the city there are plenty of opportunities to do so. I first visited Kokrobite, a laid-back beach town and backpackers’ haunt about an hour’s drive away, while researching a Ghana guidebook. It’s a fun place to relax for a couple of days, though the beach is not as clean as those to the west. Meanwhile, the relatively cool hills of Aburi to the north serve as a welcome break from the noise and congestion of the city; and the old avenue of royal palms at the Botanic Gardens that seemed to me so grand and magical as a little girl is as beguiling as ever.