Chantel Dartnall’s Restaurant Mosaic in Pretoria is outrageously unique; it’s a multi award-winning, fine dining restaurant that can boast one of the greatest wine cellars in Africa, an adjoining five star hotel and private art gallery, as well its own animal conservancy. 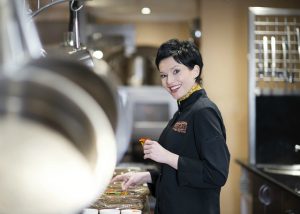 Enormous, carved wooden doors enclose and protect the menagerie of zebra, giraffe and buck that reign over the 280 hectare, Francolin Conservancy, amidst which is set a kind of Moorish Palace in which you’ll find a cornucopia of all things beautiful.

I was lucky enough to sit down with Chantel to discuss her family’s enchanted creation.

Chantel trained at the Prue Leith College of Food and Wine before working in London for two years. She then returned home to Pretoria to bring her dream of opening her own restaurant to fruition. The planning of Restaurant Mosaic and The Orient Hotel took three years, with the doors opening in October 2006. It was to be a ‘restaurant with rooms’ and the first of its kind in the country. In Chantel’s words, “Our main aim was not only to create a space where guests could come and dine, but also to create a haven where they could just escape, forget about everyday life for a moment, and feel like they’d been whisked away to a magical place.” 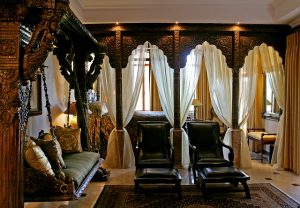 This magical place, or palace, as I like to call it, has 10 suites, each named after a major, exotic city: Constantinople, Rajasthan, Marrakesh…the list goes on. “Each suite is designed specifically to mirror the look and feel of that locale; the wood that you would find there, the drapery, the art, the soft furnishings, even the colours,” Chantel said. “Rajasthan is known as the red city, so we’ve echoed that through the room in every detail.”

I asked Chantel about the amazing art collection. “I grew up with a lot of art around me; my father is passionate about collecting and my mother is passionate about making things beautiful, so between the three of us it seemed like the natural thing,” she said. Chantel’s father, Cobus du Plessis, started collecting Tienie Pritchard’s sculptures from a young age and, by the time the hotel opened, had accumulated so many of his pieces that it was time to showcase the collection. “It felt selfish to keep it all in our house, so we built the living museum for Tienie’s works and now we’re actually building a second museum which will house all of the paintings from Mosaic,” Chantel continued. “This will literally be a haven of art and food.” 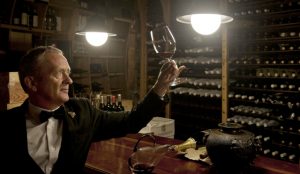 The family is also extremely passionate about wine. They have one of the largest cellars in the southern hemisphere, overseen by renowned sommelier Germain Lehodey. Diner’s Club has awarded them ‘Best Wine Cellar in South Africa’ for the last four years, and they have the ‘Best Wine List in Africa’ according to Wine Spectator. They house three different cellars with over 55,000 bottles of wine, showcasing 4,600 different labels.

“I was exposed to wines from a young age, I saw their ability to perfectly complement food, and then my travels through Europe gave me further insight as to how well food and wine pairings could work,” Chantel said. People can order wine by the bottle from the two tomes of international and local wines, but Germain, together with Chantel and the cellar team, create such intricate wine-pairings for each of Chantel’s dishes that it would be a shame to deny yourself the experience.

Speaking of which, despite the myriad amazing and exotic things to behold at The Orient, Chantel’s cuisine is the main attraction, and you won’t find anything like it anywhere else in South Africa. While working abroad she discovered the work of chef Michel Bras and Botanical Cuisine (‘la cuisine du terroir’), and immediately fell in love with his philosophy and enchanting use of flowers, “It just resonated with me and made so much sense,” she said. “I was a vegetarian from the age of 16 (I am not anymore), but I’d always been inspired to add more dimension to the average vegetarian dish. So I began incorporating edible flowers and interesting herbs, which was where that liking began.” 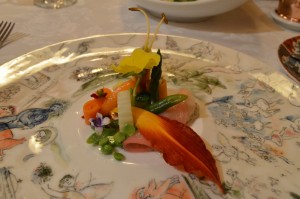 Chantel’s style combines the wonders of Botanical Cuisine with the elegance of fine dining. “In South Africa we were one of the first restaurants to be known for botanical cuisine, incorporating all of those elements. Also, looking at it holistically, not simply saying ‘how can we use the flowers to make the plate look pretty?’, but rather looking at how we could use that flower to enhance our guests’ experience. For example; fennel aids digestion and stops bloating and the hibiscus flower helps to reduce the symptoms of alcohol as well as swelling ankles. We do this without the guests being conscious of the effects of the flowers and plants, so they stand up from the table having had 10 courses and feeling full, but never uncomfortably so.”

Her team is made up of people from the local community, none of whom have had any classical training or any other training for that matter, apart from what they’ve learnt in the Mosaic kitchen. “That’s our philosophy: building up our team and empowering them,” Chantel explained. “I think I’m very fortunate to work with such loyal and dedicated people.” In fact, many of the staff have been with Chantel from Mosaic’s inception in 2006, and most of the team for more than five years. Chantel is a hands-on mentor who really believes in her staff interacting and understanding her techniques and philosophy. “My rule is, if you haven’t eaten it yourself, please don’t give it to the guests.” 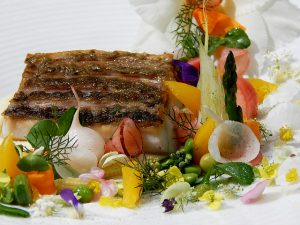 It’s truly difficult to describe the splendour of the dining experience at Mosaic, as well as the serenity of all that comprises the conservancy itself. Each dish is a work of art as well as an all-encompassing, sensual affair. Like staring up at the ceiling of the Sistine Chapel, it’s impossible to put into words; the food, the surroundings, the art, the intricate décor, the intimate service and the exquisite wines – for all are, quite simply, breathtaking.

For dinner you’re offered the option of two Dégustation Menus: The Grande Menu, which is a ten-course symphony of gastronomy, and The Market Menu, which is the six-course, little sister of the Grande. Chantel also offers vegetarian, pescatarian and vegan dégustation menus on special request. All menus include the option of international or local wine-pairings as well as an amazingly delightful, non-alcoholic, drinks-pairing.

Each menu has a narrative and each dish relates to that story. This particular menu is called Origins and includes dishes such as Evolution, First Growth, Genesis and The Garden of Eden, to name but a few. The Garden of Eden is a dish of Mauritian sea bass with a delicate tomato and lemongrass velouté, but it’s so much more than that, for the Sea Bass is served in the centre of a specially-designed plate surrounded by over 100 miniature, edible flowers, herbs, and other morsels – it’s almost too exquisite to eat.

I talk to Chantel about her magical use of flowers, “If you look at the whole menu, you’ll probably find that we use between twelve to fifteen flowers,” she said. I enquire about her beloveds and she beams. “The Hibiscus is one of our firm favourites; the ‘Alchemist’s Infusion’ was designed especially for the Hibiscus – the entire dish revolves around that one flower. The Nemesia, a flower that looks like a miniature orchid, is vital to The Garden of Eden. I also love miniature Pansies because if you put them into a container and then open it after a while, the smell that permeates from the container is like the smell of bubble gum. It’s very strange, but magical.”

We end our conversation by reflecting on her astounding journey as a chef over the last nine years. She smiles and says, “I think my cooking style has definitely become a bit more refined, a bit more delicate. There has certainly been an evolution. Originally, I was creating a dish with elements of nature, now I think I am representing nature more, so that every dish tells the story of how I have been inspired by nature.”