The Central Drakensberg follows a 200km stretch of highway N3 from Durban, followed by 60km on minor roads leading into some of the most impressive mountains in South Africa. Hikes, climbs and adventures are expected in an area like this, but the allure of this area is very diverse.

Did you know that these roads will also lead you to the home of one of the top youth choirs in the world? Or that these peaks and valleys offer a safe haven for birds of prey to recover from injury? Or that you can step out of your hotel room and be walking on a path into forests of ferns, rivers, waterfalls and caves?

You do not have to be a music aficionado to relish every moment of the concert performed by these talented youngsters. 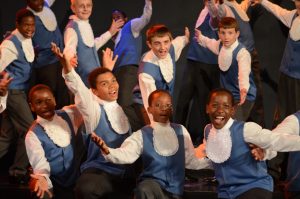 With a flick of her baton the auditorium is filled with magic as these pure voices blend and soar to become one. The next hour is filled with a wide range of music from an operatic duet from Don Giovanni to a haunting rendition of The Lion King’s “Circle of Life”/”Babu Yethu” mash up.

After an interval where tea and scones are served, we return to the auditorium that is now in total darkness. Silence is called for, and after a tense minute of sensory deprivation, the world explodes as the boys run on stage from the back of the hall. Rhythmic African sounds fill the air and bright colours of the dark continent flash as the boys appear, dressed in the vibrant costumes representing our many cultures.

What follows is an emotional roller coaster and a musical celebration of South Africa. It segues from the foot-stomping high energy of 60 voices to free-flowing tears as one pure voice conveys the sadness of a lament. The pride is palpable; the audience is encouraged to clap or sing along to Shosholoza, and feet tap in time when the choir sings and acts out Bobejaan Klim die Berg (an Afrikaans folk song translated loosely to “the monkey climbs the mountain”).

The boys clearly thoroughly enjoy the second half of their performance and the audience is loath to let them go. What is incredible is that these artists range between nine and 15 years of age. Their talent and level of dedication to their craft is admirable. The boys have two hours of choir practice every day, over and above six periods of academic classes and two of music training in the form of aural lessons and music theory.

To get a taste of a Drakensberg Boys Choir concert, you can watch the live stream most Wednesdays at 3:30, or attend a live show at their facility in Winterton. Tickets cost R135 (US$9.40) and booking is imperative.

The setting of this place alone makes a visit worthwhile. Set on a ridge with the imposing Sentinel and Monks Cowl peaks as a backdrop, the valley opens up in front of you, offering views of miles of golden rock, green lines of trees and hazy folds of mountain that fade into the distance. 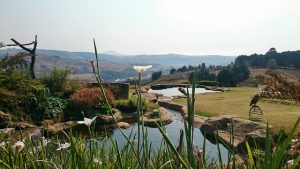 The hard facts of how these birds function sound unbelievable until you see it with your own eyes.

Greg and Alison bring the birds out one at a time and give a brief outline of each bird’s story as well as some information about their capabilities. While the family dogs bark around Greg’s feet, desperate for a bit of chicken neck, the birds are in charge, and only swoop down for a treat if they feel like it.

We watch as an eagle flies far into the distance and then circles on the thermals that carry him to 2km high in the air. Greg gives a call, gets the attention of this amazing raptor, then throws a chicken neck high into the air. The bird locks its eyes on the food and flies in at an incredible speed to catch the treat before it hits the ground. Speeds of 200-300 km/h are easily attained.

Another raptor flies in low, right over our heads. You hear and feel the wind rushing by as it passes over. 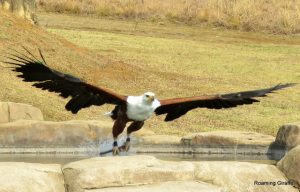 Greg shows us the feet and claws of the eagle and you can see how easily they can pick up or tear into their prey.

A shy spotted eagle owl is called. He is sitting on the thatch roof of the bomo and will not budge. His head is turning in all directions as he watches for danger. Eventually, after scanning the sky, Greg finally detects the danger that the owl spotted way before him. A tiny black speck, circling very high up has its eye on the owl causing it to assume a hiding pose

After the display there is plenty of time to walk around and view the big variety of large birds in their enclosures, and ask questions from the well informed staff. For more information on Falcon Ridge, contact Mark or Alison on 036-468-1752 or 083-354-1392. Shows times are 10:30 AM every day except Friday, and are dependent on weather conditions; cloud or rain means there will not be a show. Tickets can be purchased at the venue; no booking is required.

Hikes from the Drakensberg Sun

The Drakensberg Sun Resort offers five hikes from its premises. Distances range from an easy 2.2km walk around the lake, to a strenuous 7.5km guided climb up Skeleton Gorge. The hikes are free of charge for residents, and a small fee of R20 is levied for non-residents. A R50 deposit is required from all hikers, and signing in at the start (and again on return) is mandatory. No hikes may be commenced after 2:00 PM, as the weather can change really quickly, and it gets dark before 6:00 PM in the winter. 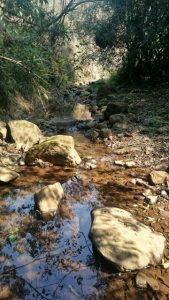 I walked the Blue Grotto trail, an interesting hike which starts in the open veld, weaves through the forest, crosses rivers, ascends and descends along steps and embankments and affords some lovely stops. One stop is at an icy waterfall that cascades into a pool, another is at a large cave, and my favourite, after a steep uphill slog in the very humid forest, offers a view out over the mountains, made even more alluring by the storm clouds gathering overhead.

I did the walk back at a much faster pace, as the wind suddenly came up and rattled the leaves, blew sand in the air and offered a few minutes of relief from the heat. Then it stopped and allowed me to hear the distant growls of the thunder getting closer.

Five minutes after signing back in to the hotel a downpour drenched the thirsty ground, falling hard from a moody black sky. Not enough to break the drought in the area but more than capable of soaking anyone caught outside.

For those who like their nature laced with adrenaline, the zip line adventure offered by the Drakensberg Canopy Tour is right next to the Drakensberg Sun, and Drakensberg Ballooning is a few kilometres outside of Winterton. 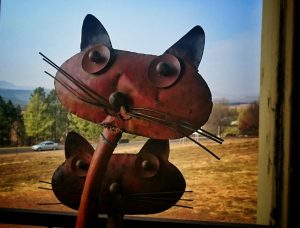 Shopping at the little centre in the Champagne Valley on the R600 you will find most basics you require, an ATM that usually works, a great coffee shop and some interesting curios.

Closer to Winterton is the funky Thokoziza Centre, a small rural mall that looks like a tourism hot spot. I was pleasantly surprised to find it was not priced for tourists, but had a nice mix of clothing, art, crafts, curios and eateries.

An alternate route between Durban and the Central Drakensberg is via the Midlands Meander. This is an area of rural roads on either side of a 120km stretch of the N3, starting near Hilton just outside of Durban and extending North towards Estcourt. There are five routes that make up the Midlands Meander, each route having anything from 10 to 30+ attractions which include artists, craft shops, eateries, accommodation, curio shops and other activities where you can stop, relax and part with some money.