If you’ve done an African safari and fallen in love with the magic of the bush, then your next step is to do a walking safari. While you can see a lot of wildlife from the back of a game drive vehicle, exploring the bush by foot is the best way to experience the African wilderness. 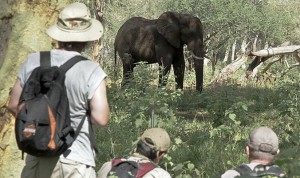 Being on foot makes you much more aware of your surroundings – you have to be alert to sounds and smells – and you get a totally different sense of animals when you’re on their level and not in a big 4×4. You realize how much work it is just to stay alive in the bush, and you can feel how vulnerable prey animals are: at any given moment they could be eaten, which endows you with a new sense of respect. There’s not much that can match your first encounter with a huge wild animal on foot: it’s an exhilarating, primal rush that is nothing like seeing animals from the safety of a car.

On game drives you see more wildlife and cover far more ground (if ticking off the Big Five list is your thing, stick to driving rather than walking) but on walks you start to notice the tinier details of the bush: a world of insects, plants, birds and smaller animals: wasps dragging paralysed spiders back to their lairs, butterflies flitting around the hollow trunk of a baobab, intricate birds’ nests and fascinatingly adapted plants. On walking safaris you’ll also learn tracking techniques (for example, how to identify the smell of rhino urine, or how to read animal tracks) as your guide or tracker reads the signs of the bush in order to find animals to spot.

Walking safaris range from walks of a few hours to epic treks of more than a week. All walking safaris are with a trained armed guide and usually a tracker who helps you find animals. While there are many multi-day self-sufficient wilderness trails where you carry everything you need to survive on your back (sleeping bag, food and cooking utensils), there’s also a great choice of luxury walking safaris where you either stay in the same lodge every night or sleep in mobile tented camps where you’re still treated to gourmet food and hot showers. If you decide to go walking in the bush that doesn’t mean you have to rough it!

Here’s our pick of Africa’s best luxury walking safaris to inspire you to get those hiking boots on.

Norman Carr pioneered walking safaris in Zambia over 50 years ago, and today Norman Carr Safaris is still an excellent choice for trips on foot in the wildlife-abundant Luangwa Valley. The company has four bush camps just for walking safaris in the South Luangwa National Park – each situated near waterholes or rivers for maximum wildlife viewing potential – which are three to five hours’ walk apart. On a four-night walking safari, you’ll traverse the distance between each camp during the day and sleep in comfort each night.

Robin Pope Safaris has been operating walking safaris in South Luangwa for over 20 years, offering the first fully mobile walking safaris in Africa. There are two walking safari options to choose from – Luangwa Bush Camping is a three-day trip where you stay in two different temporary bush camps (which include delicious meals, bucket showers and comfortable mattresses in stand up tents) and spend your days walking. The Mobile Walking Safari is a seven-day adventure, with five walking days in total. The day you arrive, you’re driven to the first camp – Nkwali – which has six rooms overlooking a river. For the next five days you walk for around six miles per day, staying at mobile camps which are set up for you each day in remote and wild locations. Though the camps are mobile, you’re not exactly camping rough – you’re treated to full bedding, showers under trees and gourmet food. You’ll even be able to fit in afternoon siestas as by the time you’ve completed the morning walk, the next mobile camp has already been set up.

Close to Skukuza in South Africa’s flagship Kruger National Park is a 12,000-acre private concession where you can explore some of the country’s finest wilderness on foot. Rhino Walking Safaris offers luxury tented accommodation and two highly qualified guides to lead you on the walks, where your chances of spotting game are high. While most nights you’re back in camp, there is the option to sleep outside – although this is not your ordinary camping experience – you’ll spend the night on a four-metre high wooden platform (safe from animals) under the stars. 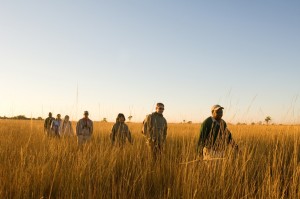 Footsteps Across the Delta, an easy four-day walking safari run by Ker & Downey, is based on how the first explorers travelled in the Okavango Delta – by mokoro (a traditional dug out canoe) and by foot. You stay in a small, intimate camp that only sleeps six guests in specially designed tents with bucket showers and porcelain flush toilets, and then head out each day for short walks to immerse yourself in the sights, sounds and smells of one of Africa’s greatest wilderness areas. Some afternoons you have the option to travel the Okavango’s waterways by mokoro – giving you a difference perspective on this water-based ecosystem.

If you’re more into landscapes than wildlife, head to the private NamibRand Nature Reserve for a three-day slackpacking trail in the Namib Desert with Tok Tokkie Trails. You’ll see gemsbok and springbok, but not much else in this harsh environment – instead the scenery will steal the show. Over three days you’ll hike over apricot dunes and through huge mountain-ridged plains of the spectacularly beautiful desert. A knowledgeable guide will bring the magic of the desert’s flora and fauna alive, teaching you to read the track lines in the desert sand and notice tiny beetles you would have missed. At night you stay in mobile camps and feast on chef-prepared meals and then sleep in comfortable cot beds under one of the world’s least polluted night skies.