There are several ways you can experience Pilanesberg. You could get up at 4 a.m. from Johannesburg and drive two to three hours, spend a half day in the park then drive back. You could hire your own driver to pick you up at a hotel and drop you back off, requiring similar hours. You could stay somewhere close and drive in for the day. Or, and this is the best option, you could stay in the middle of the park at a resort. This is where Kwa Maritane ‘Place of the Rock’ comes in.

One of the first things you’ll notice about Kwa is it’s distance into the park, which makes you go through the safari gate, then up a large hill, before coming down to the view of an ancient volcano and the lobby area where you’ll be whisked away by people waiting to greet you. They’ll also be around the entire time if you need them to get anything you might need. 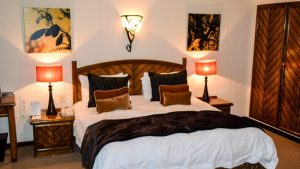 The rooms at Kwa are also excellent, and will keep you in the safari mood with themed paintings like sunsets, wildlife and scenic vistas. You will even have access to wildlife as soon as you wake up in the morning, as there is a channel on the television with a live stream of a watering hole, which has been in service since 1999. There are usually a few hippos and zebra hanging around to keep you entertained. If that’s not enough, in many rooms you can just look out of the window and get a view over the fence into the game park. A braai is also available on the large patio in some of the rooms to bring all the boerewors you want to cook for the weekend. Impala, kudu, and warthog all like to roam along the fence line for some reason — maybe they smell the food!

Outside of the rooms and treatment, it’s the amenities and activities at Kwa that help you have a full entertaining weekend. These amenities perfectly compliment a game drive, and most people will want some breaks between them as it can be somewhat exhausting with your eyes peeled for hours while cruising around the park. 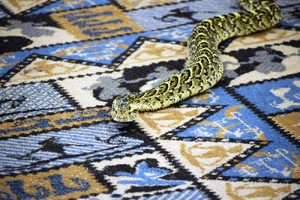 Slithering snakes are crawling throughout the park, but you probably won’t see them — and that’s not such a bad thing. Instead, Kwa offers a show for you to get up close and personal with venomous stakes without being in any real danger. The show runs daily and is handled by expert trainers that will be able to tell you all about the snakes, including how they eat their prey, whether they use a neurotoxin or cytotoxin, where they like to hide, and many other fun facts. The usual snakes that are brought out include the puff adder, boomslang, and cobra. The handlers let them slither on the ground a few feet from you. But there’s no real reason to be skittish, the handlers will have you feeling confident. They sometimes bring out a boa constrictor that you can touch, just don’t get any bright ideas and try to pet the puff adder. If that’s not enough snakes for you, there’s also an area in the wildlife center where you can see other snakes up close, like the deadly black and green mambas.

Other amenities on the huge grounds include an excellent swimming pool and a water slide, a wildlife center, a rock-climbing wall, ping pong and pool tables under a thatched outdoor roof, a souvenir shop, a chessboard, and a delightful spa. You can also visit the waterhole that you were viewing in your room through an underground hide where you walk 200 meters through a tunnel to view wildlife without disturbing them. 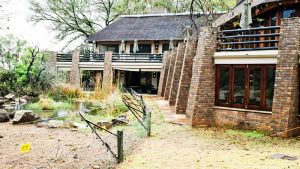 The food at Kwa is top-notch, and the restaurant offers a changing buffet theme every night of the week like ‘East meets West’ and ‘Fisherman’s Catch.’ There’s also the option of going to the Bush Braai Boma, where you’ll dine under the stars as chefs cook up fresh cuts of succulent meats on the braai. Lunch and dinner are also excellent, and include a massive buffet spread along with a la carte options. If the weather is nice, dine upstairs outside where you can view animals passing by and birds flying overhead as you dine.

While the amenities are nice, the most important part of the Pilanesberg experience is undoubtedly the game drives, and Kwa has several trained safari guides that have been working in the park for years. An advantage to having multiple safari guides is that they can communicate through radio and quickly put you on some wildlife that you won’t be able to see if you are just cruising through the park yourself. As they do this multiple times a day, they also know the best places to find animals where you would never think to look, like a certain tree a leopard likes to hang out in, or a burrowing hole of a warthog. 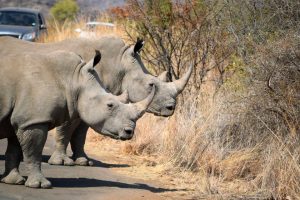 It’s better to arrange several game drives while there, and you can set this up with the concierge in advance, or even last minute if you feel like you want to get another drive in before you leave. For a change of pace, you can also arrange a bush walk through the park where you learn to track animals. The morning drive at Kwa starts up early, just as the animals are moving around after a night of hunting. This is one of the best times to see lions, as seeing them isn’t always guaranteed. If you happen to see them in the morning, you’ll also likely see them moving around instead of just sleeping. The night drive usually starts in mid afternoon, leaving you a fantastic sunset over the hills and the chance to drive for about an hour after the sun sets. You’ll see less animals this way, but will have a better chance at seeing the elusive leopard, which starts to move around just after the sun comes down. Another great part of the night drive is the anticipation you get when a safari guide sees eyes in the distance and you have to drive closer to find out what it is.

When it comes down to it, you can see animals throughout South Africa, with literally hundreds of lodges and camps to choose from. But what it often comes down to is the total experience, convenience and quality of the lodge staff and safari guides — this is where Kwa Maritane totally shines, and you’ll remember the people you met just as much as the rhino and lion you saw. So next time your thinking about a safari getaway, don’t stress, just book a package at Kwa Maritane and let them handle the rest.