Although the announcement drew new attention to this 47,000-hectare stretch of rolling grassland 45 minutes north of Johannesburg, the Cradle of Humankind has been a popular tourist destination for years. It boasts several interesting museums and other attractions, and became a UNESCO World Heritage Site in 1999.

The Cradle makes a perfect destination for a day trip away from Joburg, or even a full weekend escape from the city. Here are suggested itineraries for both scenarios.

Today Sterkfontein is still an active archaeological site run by Witwatersrand University, as well as the best tourist attraction in the Cradle. Sterkfontein visitors have the opportunity to enjoy a small but excellent human evolution museum, followed by an hour-long tour of Sterkfontein Cave. (Wear comfortable shoes and prepare to duck into moderately tight spaces.) Guides explain the geological history of the cave and the major archaeological discoveries, and invite guests to rub either the nose or the hand on the statue of Dr. Broom at the cave’s exit. Rubbing Dr. Broom’s hand brings wisdom; rubbing his nose brings luck.

Expect to spend two to three hours (possibly a bit more) exploring the museum and cave at Sterkfontein. 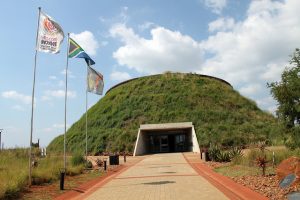 Stop 2: Maropeng and Tumulus Restaurant. Maropeng, the official visitors center for the Cradle of Humankind, is a few kilometers (about 10 minutes’ drive) from Sterkfontein. Maropeng’s architecture is its most interesting feature: The building resembles a huge ancient burial mound, covered in grass to blend seamlessly with the grassland surrounding it. Inside Maropeng is a large interactive museum telling the story of the origin of the universe, including a slightly terrifying underground water ride through the history of the earth.

Maropeng’s exhibits are kid-friendly but also fun for adults. Depending on the group it’s possible to spend a couple of hours at Maropeng (plus lunch), combining with Sterkfontein for a perfect day trip.

A combined ticket to see both Sterkfontein and Maropeng costs R190 for adults and R120 for children, available online. Maropeng’s restaurant, Tumulus, is open for lunch and has great outdoor seating with a view of the Cradle.

In addition to Maropeng, there are a number of unique activities to fill out a full weekend in the Cradle of Humankind. Here are my suggestions for what to do and where to stay if you have more than one day.

Bill Harrop’s Original Balloon Safaris: The Cradle’s hills and the surrounding Magaliesburg Mountains look beautiful from above, especially at sunrise. The best way to experience this beauty is a crack-of-dawn hot-air balloon ride with Bill Harrop’s Original Balloon Safaris. The early wake-up call is painful, but watching the balloons inflate with massive bursts of flame in the pre-dawn darkness is worth it. 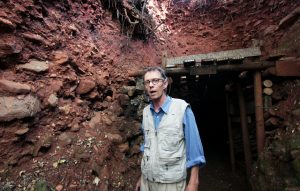 Once in the air, floating over the misty countryside as the sun slowly climbs over the horizon is a magical experience. Lucky balloon passengers might spot zebras or other game during the ride. Either way you’re guaranteed a delicious champagne breakfast afterward, hosted by the distinguished Bill Harrop himself.

Gold was discovered in Kromdraai in 1881, five years before the gold rush begin in nearby Johannesburg. Gavin has set up a tiny, fascinating museum about the mine, where he explains the history before taking visitors down into the mine itself (wear comfortable shoes and bring a sweater). The walk through the mine lasts for about 30 minutes. Look out for the giant toad who lives in the mine, which Gavin calls “the Keeper of the Dynamite”.

Open Thursday through Sunday, Le Sel @ The Cradle serves breakfast, lunch, and dinner, and also hosts weddings and conferences. The restaurant sits on a privately owned game reserve stocked with antelope and giraffe. Game walks and drives can be booked in advance.

Maropeng Hotel: Maropeng has its own boutique hotel, which is a good base of operations for a weekend in the Cradle of Humankind. The four-star hotel is quite luxurious, with spacious rooms and beautiful views of the grassland that stretches to the horizon. The terrace behind the hotel is an ideal spot for sundowners, as well as a dip in the infinity pool during warm weather.

The Maropeng Hotel has an a la carte restaurant serving high-end, multiple-course dinners and sumptuous breakfasts. The hotel offers affordable package deals including a stay at the hotel, admission to Maropeng and Sterkfontein, breakfast and dinner, and a bottle of wine. Check the hotel’s website for details. (Note that the hotel doesn’t allow children under 12.)

Other places to stay in (or near) the Cradle of Humankind: