When I moved to Johannesburg in 2010, Soweto’s famous Vilakazi Street (home to two Nobel Peace Prize winners – Nelson Mandela and Archbishop Desmond Tutu) was the first tourist attraction I visited. I’ve been back to Soweto many times since then, for walking and cycling tours, photo walks, museum visits, and traditional South African meals. 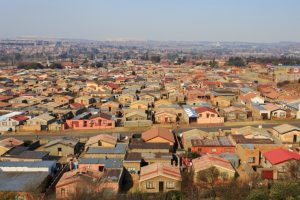 Soweto is a cultural life force, with dozens of teeming townships and millions of people. (Population estimates vary, but by all accounts Soweto has more people than many small countries.) Soweto is also a living monument to South Africa’s struggle for democracy – a must-visit for anyone who wants to understand this country’s complicated history.

But until a few weeks ago, I never would have thought to visit Soweto for the wine.

There are no wine farms in Soweto. But there is a wine festival, which has been running for over a decade. In September 2015 the Soweto Wine Festival moved to a new venue in Walter Sisulu Square, allowing it to showcase Soweto’s unique history and culture alongside South Africa’s best wines.

I spent three days in Soweto, experiencing the wine festival and using the township as a base to dig deeper into its tourism offerings – beyond the usual Vilakazi Street stops. Here are a few of weekend’s highlights.

Walter Sisulu Square (formerly called Freedom Square) was the site of the 1955 Congress of the People, where the Freedom Charter was signed. Beginning with the words, “The People Shall Govern,” the Freedom charter eventually became the basis for South Africa’s modern-day constitution.

Today the square, which is in the township of Kliptown, houses a monument to the Freedom Charter, a glitzy events venue (where the wine festival took place), and the four-star Soweto Hotel.

The Soweto Hotel is located directly above Kliptown’s bustling fruit and vegetable market, providing a window into daily life in Kliptown. Kliptown, the oldest township in Soweto, still lacks essential services and most of its residents survive on very little. Looking out over Kliptown’s maze of corrugated iron shacks from my hotel room balcony was fascinating, but also made me feel slightly ill at ease. This dichotomy is part of being a tourist in Soweto.

The wine festival – with opening hours on Friday evening, Saturday evening, and Sunday afternoon – took place in the events venue and the surrounding square, with dozens of wine-tasting stations, fashion and craft vendors, and artisan food stalls. Live musical acts included local bands, DJs, and jazz musicians. A group of classic car enthusiasts brought their 1950s-era Chevys and Dodges, polished to a shine, and lined them up along the square, posing next to the cars in vintage threads.

All of the South Africa’s top wines were on offer. But wine was only a small part of the experience. 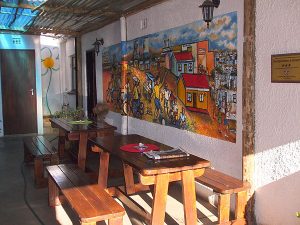 The Soweto Hotel might be Soweto’s only full-service hotel, but it’s not the only place to stay in Soweto. Lebo’s Soweto Backpackers, the first black-owned backpackers in South Africa, opened in 1999 and has become the most popular lodging for young tourists in Soweto. In addition to accommodation, Soweto Backpackers provides tours of Soweto and hearty, delicious South African food. The hostel is a lively place to hang out in the evening, when locals often stop in for impromptu jam sessions and poetry improvisations.

Soweto Backpackers is particularly well known for its cycling tours. The backpackers is a quick ride from Vilakazi Street and the Hector Pieterson Memorial and Museum, making it an ideal launching point for exploring Soweto’s historical sites by bike. 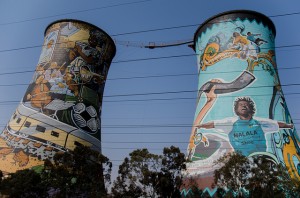 The Orlando Towers, which used to serve as cooling towers for the now-collapsed electrical power station next door, have become Soweto’s most eye-catching tourist attraction. Reaching 100 meters into the sky, the massive towers are covered in brightly painted murals and house a restaurant and “vertical adventure centre”.

Feeling brave? Take a leap from the platform between the two towers – Soweto’s only bungee jump. Or admire the view from below while enjoying shisa nyama (grilled meat), pap (corn meal porridge), and other local specialties in huge, South-African-sized portions.

Regina Mundi (which means “Queen of the World” in Latin) is the largest church in South Africa, with seating for 2,000 people and standing room for thousands more. Scores of Sowetans took shelter in Regina Mundi during the 1976 Soweto Uprisings, and there’s a palpable feeling of historical significance inside the church. The rows and rows of simple wooden benches provide a stark contrast to the colorful, awe-inspiring stained-glass windows above.

Danny Dube, the long-time tour guide at Regina Mundi, brings the church to life with his somber account of police storming the church and firing live shots at students in 1976. He shows visitors the guest book with signatures by Nelson Mandela, Michelle Obama, and Bill Clinton, as well as a nicely curated photo exhibition narrating the history of “the Struggle” in Soweto and greater Johannesburg. 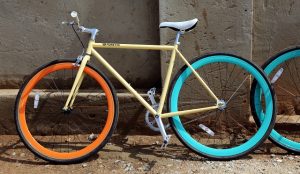 Single-gear bicycles, or fixies, are Johannesburg’s hippest trend at the moment. I didn’t think I’d enjoy riding a bike without gears. But cycling through Pimville (another historic Soweto township) on an uber-light bicycle, with the wind in my hair, was one of the most liberating things I’ve ever done.

Fixin Diaries is the place to go in Soweto for a custom-built fixie, and Fixin Diaries also hosts periodic social cycle rides through Soweto and other parts of Johannesburg. Follow Fixin Diaries on Instagram and Twitter for updates on upcoming rides.

Want to visit Soweto before next year’s Wine Festival? Consider a two-hour, half-day, or full-day visit using the hop-on, hop-off City Sightseeing bus. The Johannesburg City Sightseeing tour offers a Soweto extension, run by City Sightseeing partner So We Too, which has excellent local guides and hits many of the major tourist sights in Soweto.