Located a little over an hour outside of Johannesburg, Magaliesburg makes a fantastic place for a couples getaway, and there’s hardly a better place base yourself than De Hoek Country Hotel.

The hotel, which was built in the 1980s, has a classic castle-meets-mansion look throughout, and is surrounded by storybook-like grounds. It’s secluded from the outside world and allows you to take in the fantastic architecture, idyllic nature, and many activities of the area. It’s simply the perfect place for a three-day, two-night retreat. 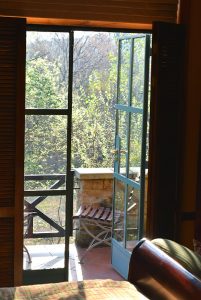 Once you check in to one of the fabulous rooms (many with warm fireplaces), take some time to explore the grounds, and admire the wonderful gardens, walking trails, weeping willows, and wandering ducks and chickens that roam the property. You can even play a game a quick game of croquet if you’re up for it. After a bit of wandering or relaxation on your balcony, you’ll soon build up an appetite and thankfully, one of the best restaurants in South Africa happens to be just a few steps from any of the rooms. It’s a total 5-star affair and has awards along the wall to prove it, such as several for being one of top 100 restaurants in South Africa. 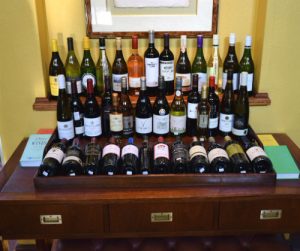 The restaurant is superb for any meal, and is famous for its five-course meals. However, dinner is undoubtedly the star of the show. The menu changes every night and uses seasonal, local ingredients, many from the garden out back. You never really know what might be on the menu, but you can be assured everything is excellent and you’ll have several choices for mains and dessert. The wine at the hotel is also superb, but there isn’t a list. Instead, you select from an array of some of the best wines in South Africa on display at the wine table. In fact the restaurant has won the Diner’s Club Winelist of the Year award multiple times. Most of the restaurant’s acclaim is thanks to the executive chef and co-owner, Michael Holenstein, who did his chef training in Switzerland.

After dinner, cozy up in your room, where you’ll quickly fall asleep to the sound of crickets and the warmth of the fireplace. Before you know it, the morning sunlight will stream in through the large panoramic windows and wake you from your contented slumber. Head down to the restaurant again for a massive breakfast spread, which could include either cold or hot dishes. I recommend hot, because there’s nothing quite like starting off the day with a filet mignon or eggs Benedict. The cold spread is also fantastic and full of fresh fruit, prosciutto, lox and more. And don’t forget to have a glass of complimentary champagne. 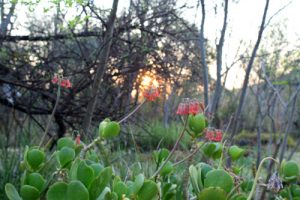 Start the new day off with a brisk hike after breakfast. If you walk just beyond the property line, to the trail that leads to the top of the Olienhout Ridge, you’ll get fantastic views of the surrounding farmland. You’ll have to climb over a few rocks and duck under some trees, but that just makes it more interesting. The area below was also the site of a battle during the second Anglo-Boer war, and the Boers used secret pathways (including some that you’ll walk on) to hide from the British. If you’re an outdoor enthusiast, there are other hikes in the area that are great for spotting birds (hornbills, owls and weaver birds are all common), so make sure to bring your binoculars and ask the staff where to go (they have plenty of maps). And if you’re out there long enough, you’ll probably run into a few vervet monkeys as well. Don’t worry, they won’t mess with you. 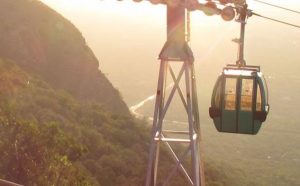 After settling in from the hike, head to Harties Cableway, which is about an hour away but is well worth it for the scenic drive and jaw-dropping views. It’s simply the perfect afternoon getaway for romance and leisurely walking. The trip up to the top takes you on the longest mono-cableway in Africa, and when you get there, walk along the Dassie Loop, where descriptive plaques describe everything you’re seeing in the distance. If you’re an adventurous couple, you can even arrange to paraglide from the top. And if you get hungry while there, you can always grab a quick nibble from the one of the restaurants or food kiosks on site.

Once you’re done, you’ll be back just in time for another five-course meal at the restaurant. If you aren’t up for that, there are several other restaurants in the area like Die Ou Pastorie (if you want something elegant), or The Goblin’s Cove, if you’re looking for a fairytale vibe. Just remember, it will be hard to beat what you’ll experience in the hotel’s restaurant, but there’s nothing wrong with exploring. 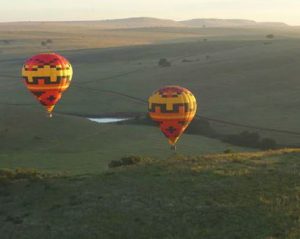 The next day, skip breakfast at the hotel and take to the air on a fantastic hot air balloon trip. AirVentures is one of the best companies to use in the area, and they offer several packages that are perfect for couples. You can choose from a classic flight or a safari flight with game viewing, both of which come with champagne and OJ to start the day off right. While up in the air, you’ll get amazing views of the Magaliesburg area and mountains. And if you opt for the safari flight, you’ll be able to silently soar over animals from above. This makes big game easier to spot and gives you a totally different perspective you’re sure to never forget.

After the flight, check out of the hotel and head over to Gilroy in Muldersdrift for some great afternoon beer tasting. Proprietor Steve Gilroy gives in-depth information about the beer-making process, and lets you taste a wide variety of craft brews, too. There are also craft shops and art galleries in the area worth browsing if you want to walk off your buzz off. By the time you’re done, you’ll be ready to head back to Joburg in a super-relaxed state (just don’t drink and drive). You probably won’t be too enthusiastic about going back home after the lovely weekend, but De Hoek and Magaliesberg will always be waiting for you another time.