From camping on beaches up the West Coast to living in a tree house in the Knysna forest, over the past four years my partner and I have been searching for the ultimate piece of African paradise.

We’ve come very close to finding it, but we’ve often missed the mark along the way and had to take cold showers in the middle of winter, sleep in bunk beds, and fight off poisonous spiders. But it’s all part of our adventure.

As part of our quest we recently stayed at Botlierskop Private Game Reserve in the magnificent Outeniqua Mountains. We’d been to game reserves before, but they all felt awfully touristy. We were hoping Botlierskop might be different.

On paper Botlierskop met all of our requirements: it had a spa, game drives, and king-size beds. So the 3000-hectare reserve seemed like our best bet for a short-but-sweet one night stay. 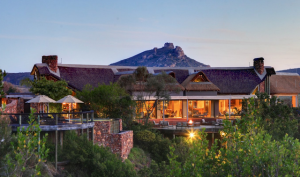 But the approach to the reserve left us with doubts. The busy N2 highway turned into dirt roads with fallen trees, potholes and flooded farmland, causing us to question where the glamorous reserve we were promised was.

“We’ve been scammed. We’re going to have to sleep in bunk beds and take cold showers,” I jokingly told my partner. On road after treacherous road we desperately hoped our paradise was just around the next corner.

Then we finally saw it. From the outside it left us skeptical, but we were tired and cranky from the road. Once we entered the main building we knew Botlierskop had the potential to be our African paradise.

Located inland from the seaside town of Mossel Bay along the Garden Route, the reserve is secluded, with nothing but cellphone reception keeping you connected with civilisation. It’s known for its exclusivity and attention to detail, so we looked forward to seeing how the reserve would match up to the competition.

We were greeted by a staff member who quickly checked us in before serving us rooibos tea, strong coffee, and traditional Afrikaans koeksisters in front of blazing fireplace. Feeling pretty blissful as the caffeine worked its magic, we were then ready for the first activity of the day — a morning game drive.

Compared to other reserves Botlierskop is small, but what it lacks in size it makes up for with its abundance of wildlife. With easy-to-spot animals and spectacular views of the Mossel Bay coastline from high up in the mountains, we were visually blown away. From zebra and kudu to wildebeest and rhino, we were able to see loads of animals, and even lucky enough to have four very inquisitive giraffes almost poke their heads into the vehicle.

Adding to the breathtaking experience was our guide. Not only was he patient enough to answer all of our questions — and I had a lot — but he also took the time to find out where we were from, and if we were warm enough throughout the drive. It was refreshing to not feel like a number being driven from animal to animal so I could quickly take a photo before being rushed back to base camp where another group of eager tourists were waiting. 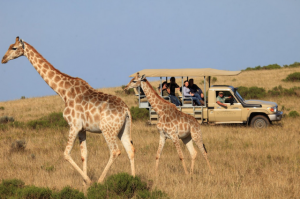 “Have we found our African paradise?” I asked my partner. “There might be bunk beds, but we’re pretty close,” he answered. There I was thinking that a little caffeine and a game drive had been enough to reveal our paradise, even though we hadn’t even seen where we’d be spending the night.

But before that could happen, we were whisked away by golf cart to the in-house spa. Secluded from the rest of the reserve in an overgrown forest area, the spa is quaint and can only accommodate two people, making it perfect for couples. We spent three hours getting pampered with some sauna time, a full body massage, and I even got my nails done.

We were later met at the spa by a staff member who escorted us to the pool, where a lunch of delicious canapés and cocktails was waiting for us. It must have been the combination of the warm midday sun, the feeling of being totally rejuvenated after the spa treatment, and the delicious food that made realise that I had probably found my very own African paradise. 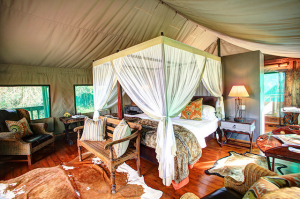 The real moment of truth arrived when we headed to our luxury tented suite (one of 17). Was this a bunk bed, cold shower bait-and-switch, or was this reserve the real deal? Botlierskop was already my paradise, but my partner needed to agree.

We stepped into the suite, which was decorated with traditional African artwork and animal skins. A colonial four poster king-size bed stood in the middle of the room, and an en-suite bathroom with an outdoor shower and deep oval bath (hot water included) were visible through the doorway. The private deck offered stunning views of the river, and there was also a fully stocked mini bar, coffee and tea facilities, and even electric blanket to keep out the chill.

We knew we’d found what we were looking for. I looked over at my partner and asked “Sold yet?” He smiled and answered, “Definitely. We’ve found paradise.”

Now this is where our day could have ended: we’d order room service and that would cap off our stay at Botlierskop. But we’d planned another afternoon game drive. Even though we saw a lot of the same animals as before, it was really nice being able to get a second opportunity to see the animals, without as many questions.

By the time our game drive ended we were exhausted, but we decided to join a few other guests for a sunset drink before heading to dinner. Then with full bellies and sleepy eyes, we called it a night. 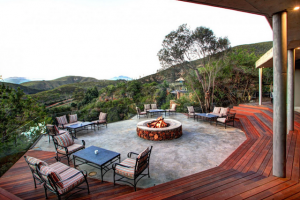 There’s something magical about waking up surrounded by lush forests and the sounds of lions roaring that makes one appreciate Africa’s untouched beauty. It helps if you are wrapped up in the best linens on a king-size bed with the smell of brewing coffee lingering in the air.

By now Botlierskop felt like home, and we wished we’d booked another night at this incredible reserve. Thinking back to our arrival, when we felt exhausted and grumpy, we were so grateful that we’d stuck it out because what we found was our African paradise, even if it was just for a night.