No one can clearly remember when the surf scene hit Taghazout, but, these days, catching a wave is bigger than mint tea in the southern Moroccan village. The ramshackle little spot, sprawling along the main coast road from Agadir to Essaouira, has long been an alternative magnet thanks to its position between the mountains and sea. The urban sprawl of Agadir, around 20km south, slowly fizzles out as you head up the coast, leaving a string of unspoilt beaches around Taghazout. Nearby, a scenic road winds inland through the palm- and oleander-lined Paradise Valley, with its honey producers and swimming spots, to the western foothills of the High Atlas. 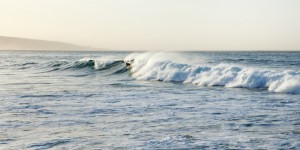 Since the days when Jimi Hendrix strummed his guitar in Essaouira and the Rolling Stones hung out in Marrakesh, hippies and travellers have sought out this part of Morocco’s 2,000km-long Atlantic coastline, to enjoy the sea views and local calamari. Today, the long hair and incense are mostly gone, but local guys still tout Morocco’s abundant kif, as marijuana is known in Moroccan Arabic, and surf culture preserves the town’s alternative feel. Here, the usual small-town sights of tagines, tèlèboutiques and men drifting along in jellaba robes are joined by board shops, bustling cafes and surfers floating along in swimming costumes.

With surf season running roughly from September to April, Taghazout is blessed with waves for everyone from beginners to pros. Breaks such as Hash Point, Panorama, Anchor Point, La Source, Killer Point and Mysteries surround town, with buses and grands taxis shuttling surfers along the coast road. A-frames, barrels and long rides delight experienced surfers, who also have to contend with long paddles out, strong rips, shallow reefs and ragged rocks. 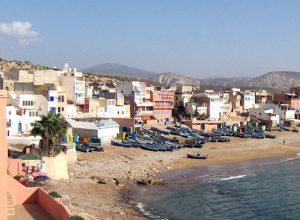 Mark Hurley, a surfer from Bristol, UK and a veteran of several Taghazout seasons, praises the waves for surfers of all abilities. ‘There is a selection of beach breaks that are perfect for beginners and intermediates, and world-class point and reef breaks for more experienced surfers. When the surf is really big, it is not uncommon to see some of the world’s best surfers, including Dane Reynolds and Taj Burrow, shredding the Moroccan point breaks. Most Moroccan breaks are right-hand point breaks, making them well suited for regular footed (left foot forward) surfers, or for “goofy” footers (right foot forward) looking to improve their “backhand” surfing.

Hurley recommends packing a wetsuit despite the high air temperatures in the summer months. ‘The Atlantic is still fairly chilly and a summer 3’2 wetsuit is recommended all year, although the hardy will be happy in boardies and a rash vest.’

A healthy industry of surf schools, equipment rental, apartments and guesthouses has blossomed here, driven by a mix of European incomers and Moroccan entrepreneurs. Founded by two British surfers, the pioneering Surf Maroc offers myriad packages, yoga and surf retreats, women’s weeks and coaching. Its guiding packages provide a van or 4×4 driven by a surf guide, who will lead you to secret beaches and the day’s best waves. For an authentic experience of Morocco, the 10-week Surfing Adventure Break mixes travelling and working on community projects with plenty of board time. 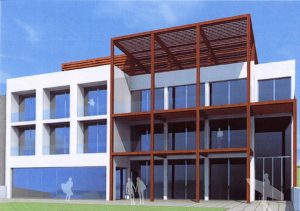 Established in 2003 with five boards, a few old wetsuits and an even older Transit van, Surf Maroc now offers six accommodation options. L’Auberge, right on Taghazout’s main beach, is the classic option, with its whitewashed Mediterranean aesthetic and ever-popular cafe. Wetsuits drip on terraces overlooking fishing boats on the beach, and an international surf crowd relaxes in the cafe to the strains of chilled electronica.

To swap busy Taghazout for some oceanfront solitude, head a few kilometres south to Villa Mandala on Banana Beach, which is named after the banana groves alongside the nearby estuary. Opening this year, Surf Maroc’s 20-room hotel, Amouage, will add upmarket appeal to the surf fun with its private terraces, infinity pool and sunken bar overlooking Anchor Point. Designed by a prominent Moroccan architectural firm, Amouage’s vintage furniture and contemporary artworks will remain true to the operation’s surfer spirit, while the promise of a bar is exciting. A reminder of Taghazout’s location in an Islamic country – albeit a moderate one – the village is mostly dry and the nearest liquor store is a few kilometres away in Aourir.

Heading south of Taghazout, Atlas peaks give way to prickly pears and the landscape assumes a Saharan quality. Indeed, dusty Goulimime is known as ‘the gateway to the Sahara’, and nearby Mirleft offers surfing in this desert environment. With half a dozen schools, Mirleft’s burgeoning surf scene has taken off in the last five years. There are several beaches, ranging from la grande plage, Imin Tourga, to dramatic Marabout’s Beach, with its marabout mausoleum and gnarly rocks. 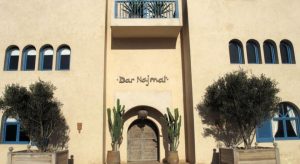 The Spanish-owned school Surf en Marruecos has brought attention to Mirleft by staging an international longboard competition every August. Speak to these guys or the British-run Spot-M Morocco about 4×4 surf safaris to local beaches and, further afield, to the Atlantic coastline of the deep Sahara. With hundreds of kilometres of empty beaches, the Moroccan Sahara offers surfing with a backdrop of pale dunes, palm-fringed estuaries and crumbling French Foreign Legion forts. Intrepid surfers can camp or stay in off-the-beaten-track villages, eating Moroccan tagines and couscous under starry desert skies, en route to enticingly named destinations such as Plage Blanche (White Beach).

Culturally, Mirleft is akin to Taghazout with its established clientele of French libertarians, artists and overlanders recovering from long desert crossings. The mellow town is aesthetically pleasing, with pink-and blue-arches sheltering arts and crafts stalls and umpteen people-watching cafes, and it has excellent accommodation. A few relaxed hotels host regular parties for the surf crowd on their roof terraces, while Dar Najmat boutique hotel and the British-run Sally’s Bed & Breakfast are more upmarket. The real knockout here is Les 3 Chameaux, occupying a sumptuously renovated 1930s fort high above town.

Another base for this stretch of coast, including Legzira Beach with its natural stone arches, is the art deco gem of Sidi Ifni. Occupied by the Spanish until 1969, most of Ifni was built in the 1930s, and a wonderful hint of Gabriel García Márquez pervades the hilly street of whitewashed relics. Surf operators include Ahmed Dik of Dik Surf School, who offers two-hour to five-day courses. 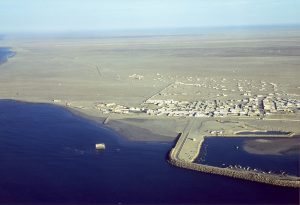 The final Saharan frontier for surfers is Tarfaya, 550km south of Agadir – en route to the disputed Western Sahara region and the Mauritanian border. A former Spanish protectorate and stop on the French airmail service’s route to Senegal, Tarfaya is a dilapidated outpost where sand piles around relics such as the Spanish fort. French pilot and writer Antoine de Saint-Exupéry gained inspiration for The Little Prince, which features a pilot lost in the desert, while stationed here in the 1920s.

Tarfaya’s surf scene is undeveloped, despite some reputedly excellent breaks reached across the surrounding hammada plains. Conditions are mostly flat in town, but the northeast wind creates swells on nearby shipwreck-strewn north-facing beaches. Change is afoot, with a new windfarm and plans for a new port, sparking hopes for the relaunch of the ferry service from the Canary Islands – so surf the Sahara now, while the beaches are still pristine local secrets.