All over Africa, wildlife populations are threatened by habitat loss, poaching and conflict with humans. As animals lose land to roam and hunt on, they turn to livestock as easy prey, often with a resulting violent backlash from the farmers and villagers trying to protect their livelihood. Conservationists and local communities are often pitted against one another on opposite ends of the spectrum. It’s hard to find a balance between human needs and wildlife survival in an increasing number of places in Africa – but it is possible. 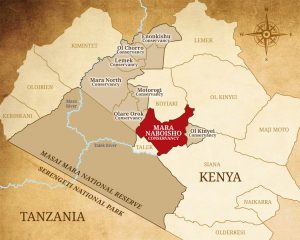 The Mara Naboisho Conservancy is an inspiring conservation success story that proves that animals and people can sustainably co-exist. On the northern edge of the Maasai Mara National Reserve, Kenya’s flagship wilderness area which is home to part of the annual world-renowned wildebeest migration, the conservancy occupies a 50,000-acre area of land. It was established four years ago when over 500 Maasai land-owning families decided to join up (“naboisho” means “come together” in the local Maa language) to form a private wilderness area which would allow for wildlife movement (there are no fences between the conservancy and the Maasai Mara), tourism and the grazing of their cattle herds.

While the Maasai Mara National Reserve has been a park since the 1960s, the area around it, an important buffer zone for wildlife, has been used as cattle grazing land by Maasai people. Only in the last couple of years have landowners created conservancies such as the Naboisho in an effort to conserve the land and wildlife.

In order to allow the land to recover from intensive herding, the Maasai now practice controlled grazing on the conservancy. To make sure that there isn’t a significant impact from tourism, there are only seven small, unfenced camps (a whopping 350 acres per available bed), and no self-driving is permitted, so there are only a few cars for each sighting. It’s a win-win situation all round: tourists see Kenya’s famous wildlife without having to contend with the traffic jams of safari vehicles come peak season, the dollars generated from visitors goes back to the community and there’s more grazing land for the animals of the Mara. 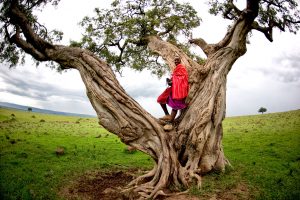 I explored the Mara Naibosho Conservancy with Saruni Mpoe, one of the Maasai landowners and a guide at Ol Seki Hemingways Mara, one of the luxury tented camps on the conservancy. He enthusiastically praised the conservancy and how it benefits both wildlife and local people. “The Maasai use they money they receive every month from tourism to send their children to school and buy more cows. The grass is shorter here than in the Mara, which means that animals feel safer to graze because they can spot predators more easily.”

Mara Naboisho has an amazing concentration of game. Minutes after getting off the 14-seater Cessna Caravan, which brought me to the conservancy from Nairobi on a bumpy but incredibly scenic flight, I spotted white bearded wildebeest, Thompson’s and Grant’s gazelles, Maasai giraffes, elephants, olive baboons and zebra. And that was at noon, in the heat of the day, which is generally the worst time to spot game. Over the next few days of bouncing along the dirt roads of Naboisho in a 4×4 with Suruni, I saw blood-spattered hyenas (one disconcertingly crunching a wildebeest’s skull), black-backed jackals, nonchalant lions lazing in the sun, a pod of water-spouting, grunting hippos, and a regal female cheetah who seemed to know we were photographing her and posed obligingly on the top of a mound, yawning every now and then to inspire even more frenzied trigger-pressing.

The wildlife sightings were made all the more meaningful by Suruni’s explanations and genuine enthusiasm and respect for the animals. In fact, the story of how Suruni came to be a wildlife guide is actually as inspiring as the success of the conservancy. An Austrian family, on holiday in the Maasai Mara, came to visit Suruni’s village and decided to sponsor him for his education. They invited him to come to Vienna, and he had the option of moving to Europe, but he found it too cold and crowded and missed home after only a few days. He returned to the Mara, trained at the guiding school, worked on a lion conservation project for nearly two years and then began working as a guide. His objective? To encourage people in his community and tourists from around the world to conserve the wildlife he holds in near-sacred respect. 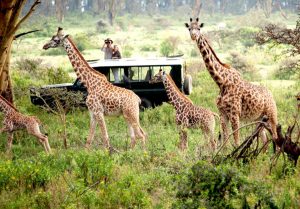 I ended my trip in the Mara Naibosho with one of those quintessential African sunsets. As the sun flames its last rays, a line of zebra languidly traversed across the horizon, silhouettes against a rich yellow sky. A hyena, face turned towards the last heat of the day, closed its eyes, as if in blissful repose. A herd of Thompson’s gazelle, exquisitely beautiful creatures, stood tightly packed together, munching on grass, while an elephant family slowly crunched its way through a thicket of acacia trees. There was a timeless feeling to it all, as if this exact scene has taken place a million times before and will be repeated forever.

In an age where wildlife populations are being decimated, the Mara Naboisho Conservancy, and others like it around the Maasai Mara, are a glimmer of hope – and a blueprint for other areas of land on the edge of parks and reserves. With the help of tourists and people like Suruni, this is how those African sunset scenes in the wild will continue as they’ve always done.

Safarilink has two flights a day on small aircraft from Nairobi and the Maasai Mara, making a stop at the Naboisho Conservancy.