Fifty years after Agadir was levelled by an earthquake, the dependably sunny resort is moving upmarket, with luxurious beachfront hotels and a gleaming marina. Its concrete boulevards and tacky Irish pubs remain, but the sandy crescent beach, excellent facilities and regular flights from Europe make it a great base for families in particular. The following are Agadir’s best sights, activities, hotels, restaurants and day trips, from the 16th-century Kasbah to the Berber souk.

This recently renovated museum on a pedestrianised walkway covers Berber culture, with an excellent collection of artefacts and beautiful jewellery. The information panels are mostly in French, so hire an English-speaking guide for explanations of the various jewellery, carpet patterns and so on. Inspired by Marrakesh’s similar Maison Tiskiwin, the museum is a great place to get some background before meeting Berbers in the villages of southern Morocco. North Africa’s indigenous people, the Berbers (or Amazigh) comprise several groups – those around Agadir are mostly Tachelhit-speaking Chleuh Berbers. Passage Aït Souss. 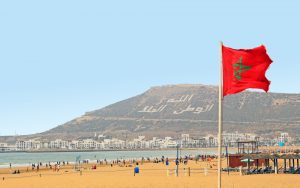 Combined with southern Morocco’s reliably sunny weather, the crescent beach linking the city and marina has turned Agadir into a package-tourism success. The sandy stretch is sheltered, clean, spotlit at night and patrolled by lifeguards and police during high summer – just watch out for the undertow. On the private beaches near the marina and fronting the big hotels, facilities include showers, toilets, children’s play areas, deckchairs and umbrellas. Beachfront shops sell bodyboards, buckets and spades, while hotels and operators on the sands organise jet-skiing, surfing, flyboarding and windsurfing. The whole of Agadir hits the promenade for a sunset stroll, remaining at the cafes and bars long into the evening.

Agadir owes its concrete cityscape to the devastating earthquake of 1960, which killed some 18,000 people and necessitated much rebuilding. This museum in a corner of Jardin de Olhão covers the quake and its terrible aftermath, in which the city authorities, unable to cope with the fatalities, disease and chaos, left the deceased in the collapsed city and sprayed the area with lime and DDT. The resulting mound is known as Ancienne Talborjt. Photos also show Agadir’s previous incarnation in the early 20th century, when the French developed the port city. Jardin de Olhão, created in 1992 to mark Agadir’s twinning with the Portugese town, is a leafy oasis in the city’s concrete hinterland and a pleasant place for a wander. Cnr Ave du Président Kennedy and Ave des FAR. 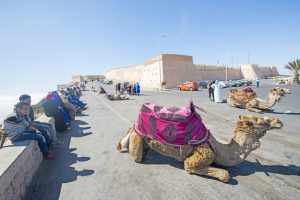 Overlooking Agadir from its hilltop perch, the 16th-century castle was restored in the 1740s and once accommodated 300 people. Although the ruins survived the great earthquake, little remains other than the sturdy outer wall, traces of housing, and an intriguing inscription above the entrance. The inscription says ‘Believe in God and respect the King’ in Dutch and Arabic – a reminder of bygone trade between the Maghreb and Europe. Hopeful locals offer camel rides at the gate, but the main reason to come is the sweeping view of Agadir, with the grass-covered Ancienne Talborjt area at the foot of the hill. Rather than schlepping up on foot, hire a taxi and walk back down. Off Ave Al Moun.

Join the locals at this sprawling market, which offers a taste of authentic Morocco with nary an Irish pub in sight. Lines of trestle tables sell bright piles of fresh fruit and veg from the nearby Souss Valley, the fertile strip between the High Atlas and Anti Atlas ranges. Look out for argan nuts and products – Souss goats famously climb the frizzy trees to munch them – and pricey saffron from Taliouine, another local spot. Conical tagines stand on hobs outside cafes and Berber apothecaries sell herbal concoctions from incense to lipstick. Apart from its hustle bustle and exotic sights, the souk has souvenirs at lower prices than the seafront, including handicrafts, leatherwork, lanterns and flowing jellaba robes. Blvd Abderrahim Bouabid. 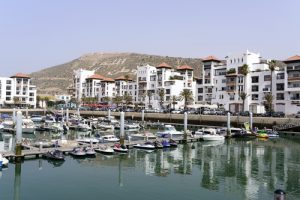 This complex of faux white kasbahs evinces Agadir’s growing confidence and wealth, driven by the neighbouring port and the tourist market. Contrasting with the wizened hilltop Kasbah in the background, the billion-dirham development is the place to find a tour boat or a sunny café table. Most people wander up the beach to browse the shops and drink a cold beer, but if you find yourself here at lunch or dinner, restaurants serve the local seafood in style. Paella is the house speciality at Les Blancs, which occupies a series of white beachfront blocks at the marina entrance. The upmarket 33 Yacht Address serves seafood and Moroccan meat dishes, accompanied by sweeping beach views. Off Ave Mohammed V.

Agadir is a great base for explorations of southern Morocco, with some beautiful coastline and High Atlas foothills nearby. Just 20km north of the city, and easily reached by grand taxi, Taghazout is a famous surf town with legendary breaks such as Hash Point. Lessons can be organised and equipment rented through operations including Surf Maroc and Taghazout Surf Hostel. Alternatively, drift down the lanes to the main beach, where L’Auberge serves international dishes and fruit juices amid bougainvillea and blue shutters. Taghazout can be combined with a day trip up the palm-lined, honey-producing Paradise Valley to Immouzer des Ida Outanane, one of North Africa’s most beautiful waterfalls. 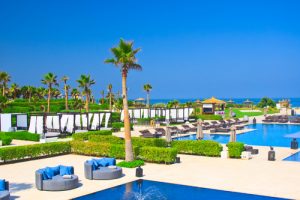 Among the many luxurious hotels and resorts on the beach, the Royal Atlas has the strongest Moroccan flavour with its hand-crafted cedar doorways, archways, fountains and domes. Inspired by traditional Berber architecture, the five-star palace is filled with antiques, artworks and Moroccan carpets, poolside palms and bonfires flickering in the balmy evenings. Everything is dedicated to evoking the ancient culture and calm of Morocco’s mountains and desert, from nightly music and performances to Le Riad bar’s fireside shisha. The spa adds to the Maghrebi theme with its hammam and massages using argan oil, orange blossom, musk and amber, while the sumptuous rooms include oceanfront villas with private pools.

Given its all-encompassing tourist industry, Agadir’s restaurants, cafes, fast-food joints and bars cater to everyone from Arab princes to sun-kissed Brits. While the marina and the top-end hotels boast most of the finest restaurants, Côté Court is an atmospheric central option. Located at the Royal Tennis Club, its cuisine and décor combine Mediterranean chic and Moroccan fantasy, with basket lamps and up-lit trees dotting the patio. Dishes include filet mignon, grilled salmon, wood-fired pizza, and unusual choices such as calamari risotto with chorizo chips; the lunchtime plat du jour and children’s menu are good value. Off Blvd Hassan II.