A self-driving holiday is one of the most economical and satisfying ways to see the sights and meet the people of South Africa.

But if you’ve ever contemplated such a trip you’ve probably had a million questions and concerns. What are the roads like? What type of vehicle do I need? Is it safe? When is the best time to go?

In this article Marinda Louw Coetzee answers those questions, and shares her tips on how to make self-driving in South Africa as hassle-free and enjoyable as possible. 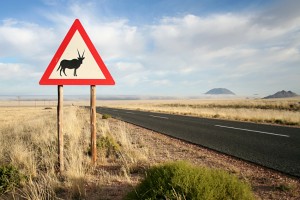 Most roads in South Africa are tarred (paved) and well marked, but be aware of ‘adventurous roads’ in and around the Kruger National Park, Limpopo province, in the stretch from the south of KwaZulu-Natal towards the Eastern Cape and Port Elizabeth, and the inland area around Oudtshoorn and the Karoo. Often these roads will take you to the most breathtaking destinations and is often worth the extra effort.

Main highways are numbered with an ‘N’ — for example driving from Cape Town along the Garden Route will take you along the N2, and driving from Johannesburg to Pretoria is via the N1.

Most road signs are in English, but you may encounter Afrikaans, Zulu or just local English words describing places or things: ‘lughawe’ (airport), Kaapstad (Cape Town) and ‘robot’ (traffic light) are some of them. 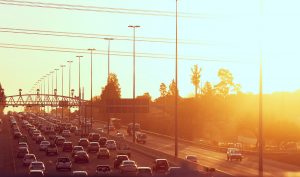 South Africans drive on the left side of the road. When driving on a double-lane highway, slower vehicles should stay in the left lane unless overtaking a slower vehicle, which the right lane is used for. Always use your indicators when changing lanes.

The blood alcohol limit is 0.05g/100ml. This equates to two-thirds of a beer, 75ml wine or 25ml of spirits consumed per hour. Do not drink and drive, rather use a taxi service.

Drive defensively: local minibus taxis often they do not adhere to traffic rules, so you must be careful and patient around them. Be aware of pedestrians, cyclists and animals – even donkey carts use the roads in South Africa.

In many public parking spaces, self-appointed “car guards” will try to help you park or offer to safeguard your car. You do not have to pay them, but it doesn’t hurt. 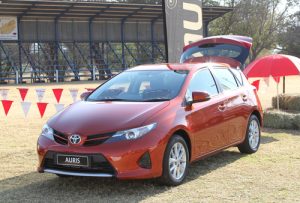 Choose the largest vehicle you can afford. Budget-class vehicles often do not have airbags or power steering, while a larger vehicle is a better option for long distances. Air conditioning and high road clearance will make driving more comfortable, especially on gravel roads.

Most rental vehicles in South Africa are manual transmission, but automatic cars are available. Automatics are usually slightly more expensive and must be requested — don’t assume your vehicle is automatic unless you are specifically told so. Rental vehicles from internationally franchised agencies in South Africa are usually retired after 9 to 15 months, so your car will be a recent model and reliable. Most new rental cars use unleaded fuel and are regularly serviced.

Budget option cars such as the Chevy Spark or Hyundai i10 are OK for city or highway driving, but are not the best choices for an extended road trip. If you are going into rural areas or off the beaten track, consider a larger (higher ground clearance) vehicle, a 4×4 or even a bakkie (pronounced ‘buckey’). A VW Tiguan (automatic), Toyota Hilux (manual), Toyota Fortuner (auto) or Nissan Xtrail (auto) are all good choices and offer better shock absorption, better game viewing (high seats), and more space for luggage and people. 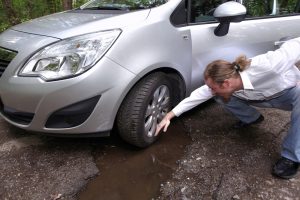 As of August 2015 petrol cost around US$1 per liter (there are 3.8 litres in a gallon), which means it will probably cost you at least US$45 each time you fill the tank. Don’t forget to factor this cost into your budget.

Petrol stations (also known as garages) are located nearly everywhere and often include shops, restaurants, playgrounds and bathrooms. In South Africa petrol stations are “full service,” meaning an attendant pumps your gas, and you are expected to offer a small tip (about R50).  Have them check the tires and pressure after driving on gravel roads, and periodically top up the oil and water levels.

Weather and when to go

South Africa is in the southern hemisphere, which means summertime is from December to March, and winter is from June to September. In winter, the weather is mostly dry, except for the Western Cape where it might rain for days. In summer, afternoon thundershowers are common in the northern provinces and Johannesburg. Every season is unique and due to the varied landscapes and size of the country, South Africa is good to drive through any month of the year, obviously depending on what you want to experience.

Don’t underestimate the distances in South Africa. It is a huge country — Cape Town and Johannesburg are over 1200km (750 miles) apart, and it takes at least 12 hours to drive the N1 highway between them. 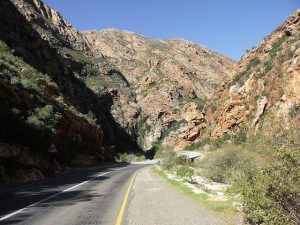 The most spectacular views should be enjoyed at a leisurely pace: the winding Panorama Route, the eastern Free State, the Wild Coast, and the tiny villages of the Eastern Cape should not be rushed through. Travelling on rural roads, you will have to allow extra time for driving on gravel and be on the watch for stray animals.  Add at least an extra hour for every 100km (62 miles) you want to travel on a back road.

Keeping your lights on will increase your visibility to other road users, especially on dusty and gravel roads. Lock your doors when driving, and always after parking the car. Try not to drive at night, especially in rural areas where animals and pedestrians might not be clearly visible. To prevent smash-and-grab incidents:  when driving in urban areas and approaching a junction, be sure not to leave handbags or mobile phones in plain sight. Stow under your seat or put it away.

Do not stop at an accident scene (unless you are involved), and do not pick up hitchhikers. Your rental car should have an emergency number on the key holder. You can also call 112 from your mobile phone, or 10111 from a land line.

How to make it fun

Buy a good map or use a navigation app such as TomTom Southern African or AfriGIS Navigator with Traffic (South Africa) if you plan to venture off the major highways or need real-time directions based on traffic conditions.

Pack snacks for the road; South Africa has excellent fresh fruit and nuts and a dried meat called biltong. Stop often to rest and take photos, and do not rush. In Africa things happen at a slow pace.

For some unique self-drive holidays in Southern Africa, have at look at http://www.elefant-tours.com/self-drive-tours/south-africa/