Beyond the medina walls of Morocco’s big cities, there lies an altogether more relaxing side of the country – one where Berbers sip mint tea at cafes with views of the Atlas Mountains, turban-wrapped nomads lead their camels into the desert, and country life continues at a slow pace. Morocco’s small towns are the best places to slow to the rural rhythm of North Africa and get under the skin of this fascinating nation. Life on town squares and village lanes is a welcoming, communal affair – you might trek into a High Atlas village and get invited to attend a wedding ceremony or share a tagine, giving a hands-on experience of local culture. Furthermore, whereas centuries of buildings are crammed into the cities, many towns are dominated by a single architectural style, creating a distinct aesthetic and atmosphere. 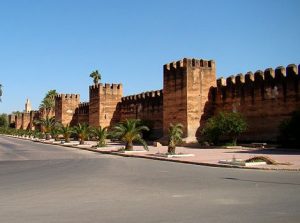 While most Moroccan towns have a ville nouvelle (new town) alongside their old quarter, Taroudant is mostly contained within its mud-brick medina walls, making it a marvellous living museum. Two markets on the winding lanes and squares are sensory labyrinths, selling everything from mobile phones to carpets and ceramics: the municipal market, where Chleuh Berbers sell produce from the fertile Souss Valley, their tables of fruit and vegetables spilling out onto Place an-Nasr; and the grand souk, with its stalls of silver Chleuh jewellery, influenced by Saharan styles and Jewish artisans who once lived here.

Spend a night in the town known as ‘Little Marrakesh’ to see sunset illuminate the 7.5km ramparts encircling the medina. As the sun sinks into the mountains – the High Atlas and Anti Atlas ranges are both visible from Taroudant’s roof terraces – the red-mud walls take on a rosy glow. 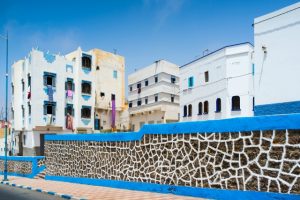 Not far from the sandy beginnings of the Sahara, this white-and-turquoise coastal town has a distinct history and atmosphere. Most of the buildings lining the esplanade and hilly streets were built by the Spanish in the 1930s, resulting in a wonderfully dilapidated collection of art deco piles that bring Havana to mind more readily than Marrakech. Place Hassan II is the deco centrepiece – colonial relics such as the former Spanish consulate overlook the square, and nearby are a lighthouse and boat-shaped house.

Apart from surfing and sunbathing, the main activity is wandering Ifni’s calles (streets) and enjoying the seductive ambiance among elegantly decaying houses. The mint tea-sipping locals are an independently minded lot, watching Spanish football matches in the cafes, playing chess and reminiscing about the hippies who introduced them to American rock. 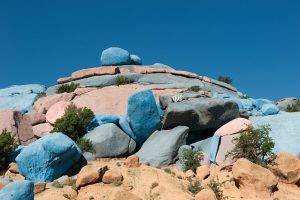 Deep in the Anti Atlas, Tafraoute’s pink houses nestle in the oasis-dotted Ameln Valley, beneath red granite mountains that glow with fiery colours at sunset. The surrounding peaks remain unexplored compared with the High Atlas and Middle Atlas, and Tafraoute is emerging as an activities centre.

Hire a bike and cycle out of town to rock formations, prehistoric carvings, traditional Berber houses preserved as museums, and Aguerd-Oudad’s painted rocks. Belgian artist Jean Verame spray-painted the boulders, creating an incongruously colourful work of landscape art. From these surreal forms, the road leads over a mountain pass to Afella-Ighir, where an oasis worthy of Lawrence of Arabia occupies a string of gorges.

One of the main appeals of Tafraoute itself is its lack of development, with few hustlers in comparison with Morocco’s tourist hubs. It is a pleasure to wander the ramshackle streets, between little markets and boutiques selling Berber carpets, jewellery and leather slippers, a local speciality. 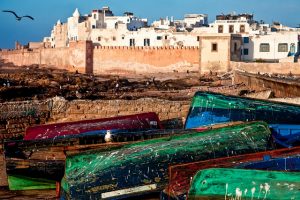 Behind Assilah’s 15th-century ramparts, built by the Portugese before the Spanish grabbed the town, Moroccan and European incomers have renovated the whitewashed medina houses. A short bus ride down the Atlantic coast from Tangier, what really makes this seaside medina stand out is its artistic bent. During the Assilah Festival every July/August, local and international artists colour the lanes with murals, turning huge walls and tiny corners alike into their canvases. The town has over 50 resident artists and the three-week festival is an excellent time to visit their galleries and studios, with events such as a fantasia (musket-firing cavalry charge) taking place.

The local area is an intriguing part of Morocco’s Atlantic seaboard, with Paradise Beach, reached by a 3km walk or calèche (horse-drawn carriage) ride from Assilah, and the prehistoric stone circle at M’Soura. 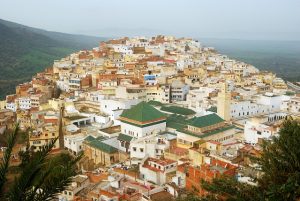 This hilltop town near Fez is named after the Prophet Mohammed’s great-grandson, who introduced Islam to Morocco and founded the Idrisid dynasty. Pilgrims visit the town to pay their respects at the saint’s mausoleum, stopping at surrounding shops to buy religious memorabilia. Non-Muslims were once banned from visiting, but there is now a collection of welcoming guesthouses, some with views of the Roman ruins at Volubilis.

Around the famous mausoleum, the town’s narrow lanes spread across two hills, and you can get your bearings on the panoramic terraces. Their aerial view of town, its whitewashed houses tumbling into a green valley beneath the Zerhoune mountains, is an iconic Moroccan scene. Every August, Moulay Idriss hosts Morocco’s largest moussem (religious festival), featuring spectacles from fantasias to musical performances over three weeks; locals say five pilgrimages to the moussem is equal to one hajj to Mecca. 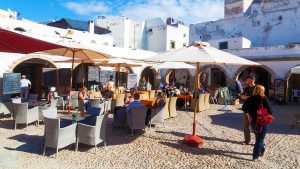 Essaouira’s seafront ramparts have featured in Orson Welles’s Othello and Game of Thrones, while Jimi Hendrix hung out here in the Sixties. More recently, the trail of hippies to Essaouira’s whitewashed lanes and roof terraces has given way to tourists and fashionistas, with renovated riads popping up in the medina. The chic seaside spot, once a major port for goods travelling from Timbuktu to Europe, has become a byword for modern Maghrebi style, its medina lanes winding between chunky wooden doors, blue shutters, beckoning courtyards and craft stalls. Unesco named the medina, designed by a French architect in the late 18th century, a World Heritage Site, for exemplifying European military architecture in North Africa. 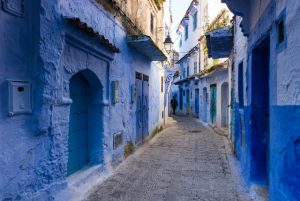 High in the Rif, Chefchaouen’s blue-tinted medina is an Andalucian fairytale in the mounatins. Muslim and Jewish refugees from Granada built the distinctive houses, with their balconies and courtyards, in the 15th century; the Spanish painted the town blue in the 1930s. Between the red roofs and cobbled lanes, everything is coloured pale blue, from low arches and wavy walls to studded doors and terracotta tiles. Even the new part of town has aesthetic credentials – the Spanish surrealist artist Juan Miró designed Plaza Mohammed V.

Chefchaouen’s name means ‘look at the peaks’ and the town is surrounded by mountain walks – climb Jebel el-Kelaâ (1616m) for views of the Rif and the Mediterranean.