Located in Joburg’s emerging Maboneng Precinct, Blackanese has been touted as one of the most interesting sushi joints in the city for the last few years. Which is why I had high expectations of the place before I went to check it out.

When I arrived, the entrance was somewhat hard to find — I could see only a small sign from the street, with a crowd of staff hanging out in front of it. Once the staff realized I was looking for Blackanese, I was brought to a top floor table by the window (probably the best seat in the house) and noticed the red bricks and rustic wood tables and chairs. A small boom box on the ground floor cranked out ambient tunes that helped to set the mood, and several signs and decorations incorporated the Africa-meets-Japan vibe. Though I came for lunch, it seems like it’d be a far more appropriate place as a late-night hang out. 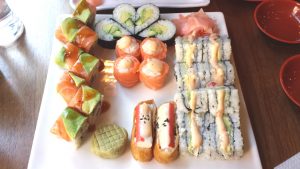 Looking over the menu, I had expected more African fusion type options, but there weren’t many. It seemed to offer mostly typical sushi rolls you would find anywhere, with particular emphasis on salmon rolls — don’t expect any crazy Godzilla or volcano rolls here. The wine and cocktail list looked interesting, but was rather small for a wine bar. My companion and I ended up ordering the assorted platter of sushi for two, along with a biltong sushi roll (one of the few African fusion items on the menu). The biltong roll was definitely the most interesting; however, the consistency of the rice and the fattiness of the biltong made it hard to swallow at times, but other than that, it tasted decent. The assorted platter included four salmon roses, California prawns, crab fashion sandwiches, vegetable bean curd, rainbow rolls, maki tuna and two pieces of nigiri. The sushi was pretty good, but not spectacular — the rice was cooked well but could have used a bit more rice vinegar. The sauces were probably the best aspect of the rolls. However, after digging in, we discovered that three of the more expensive items (the maki tuna, the nigiri, and the prawn) were missing. They had substituted extra avocado and crab rolls to get it to 26 pieces, but didn’t bother to tell us.

After devouring the sushi and already somewhat full, we ordered the weekend fish braai to see what it was all about. When it arrived at the table served on a nice wooden board, it definitely looked appetizing, but we were a bit disappointed by the incredible number of bones in the fish. After deboning it as much as we could, there were still bones in virtually every bite. The overall taste was ok — not overly fishy with a nice marinade — but nothing to write home about. A complimentary rice dish followed the fish but we only took a couple bites since we weren’t wild about the overly sweet taste. Once we left, we were surprised to find the fish was being grilled outside on the sidewalk next to passers-by, which seemed a bit odd for an upscale establishment.

The service was quick and accommodating throughout the meal, but we had to wait awhile to get our check as the waiter had walked outside somewhere and everybody else seemed to be tied up.

If you’re in the area and craving sushi, it’s really your only option, but the food has a bit of a way to go before it matches the caliber of other sushi places in South Africa. But that’s probably not what Blackanese is aiming for, and it’s a welcome addition to the growing neighborhood.