Once a pariah city in a nation racked by ethnic conflict, Kigali has rebounded as one of the safest and most attractive cities in east Africa. Ringed by lush mountains and criss-crossed by winding boulevards, the city is slowly re-branding itself as a destination that’s known more for culture and cuisine than for “disaster tourism,” or as a stopover en route to gorilla treks and volcano parks.

Hilly and green, Kigali is one of Africa’s cleanest and most efficient cities — sort of a Singapore in Africa (don’t bring plastic bags with you, as they are illegal!). Kigali’s one million residents drive and walk on trash-free and pothole-free roads lined with LED lights, past red-roofed houses and even small farm plots. This orderliness and relative prosperity is a byproduct of the efforts of President Paul Kagame, who is determined to turn the city into a showpiece for international commerce and tourism — and he’s succeeding. It’s easy to forget you are in Africa, considering how different Kigali feels from more chaotic capitals like Kampala or Dar es Salaam. 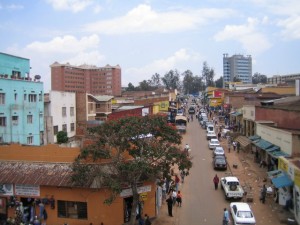 A sprawling city, Kigali is divided into suburbs like Kiyovu, Kimihurura, and Nyarutarama, which house various museums, arts collectives, international-style restaurants and bars, and bustling local markets. If you can’t find something to do, eat, or see here, you aren’t trying very hard.

Of course some of the top attractions relate to the 1990s era genocide. The excellent and sobering Gisozi Genocide Memorial Centre pays tribute to those who lost their lives and attempts to explain the origins of the tragedy (some say it leaves out important details). The Hotel des Milles Collines, made famous in the 2004 movie Hotel Rwanda, is now one of the swankest spots in town. Local celebrities and even President Kagame are routinely spotted. So spring for a drink and relax at the pool, if you can afford it!

You can also visit the lush and truly palatial estate of former Rwandan presidents, just east of the city. Take a private tour of the house, which featured its own nightclub and a secret loft which could be used in times of national crisis. Adjacent to the grounds you can see the remains of President Juvenal Habyarimana’s plane, which was shot down in 1994, igniting the genocide.

Aside from the big-name attractions, there’s the somewhat decrepit Natural History Museum, the Inema arts collective, the Ivuka arts center, and innumerable small galleries, shops and markets. Business come and go in dynamic Kigali, a city full of entrepreneurial locals and expats alike. If you want to take a walking tour of some of the more colorful (non-expat) areas of Kigali, the ladies at Nyamirambo Women’s Centre offer them.

With the influx of foreign investment over the last 10 years, Kigali has become home to a number of international-caliber and brand name hotels. 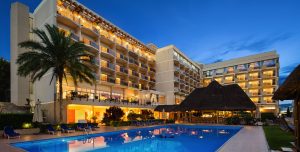 The aforementioned Milles Collines by Kempinksi, located near the CBD, is probably Kigali’s top hotel in terms of both price and amenities. A grand hotel that was opened in 1973, it’s name translates to “1000 hills.” The hotel includes multiple restaurants, a pool and pool bar, and 117 rooms that blend contemporary style with African handicrafts and art. It’s scheduled for renovation throughout 2015 and into 2016. A favorite with business travellers, the hotel offers close proximity to the corporate and government offices of the city center, and the convention center.

The Serena Kigali in Kiyovu also has a long back story. First a Belgian-owned hotel known as Hotel Diplomates (which also briefly appeared in the movie Hotel Rwanda), it was later bought by the InterContinental Hotel group and remodeled in 2003. It became a Serena property in 2007 as was remodeled yet again. It is on par with the Milles Collines in terms of luxury, with a spa, a pool that sits right in the center of the hotel’s atrium, a fitness center and 147 plush, spacious rooms. Voted “Rwanda’s leading hotel” for three years in a row, it meets the needs of both well-heeled business and leisure travelers seeking the comfort and standards of a known brand.

Other top choices include the Umubano in Kacyira, a four-star hotel located about 5km from the city center; The Manor Hotel in the upmarket neighbourhood of Nyarutarama; and the more modest, intimate Hotel Le Printemps in Kimironko.

From brochettes to ugali to mandazi, Rwanda has an incredible array of foods to get your mouth salivating. While the country incorporates cooking styles from other east African countries, it manages to create fantastic combinations that are uniquely Rwandan. Although Kigali has not only Rwandan food, but an array of international cuisines from Asian to Zimbabwean.

There are over 150 venues to try, from restaurants, to wine bars, to bakeries, to bistros. Favorites include Republika for sundowners, Lalibela for Ethiopian, Heaven for creative international cuisine (reservations required), Khana Kazana for Indian, and Rz Manna for baked goods and hearty breakfasts.

Though Kigali is a somewhat sleepy city where most places shut down by 8pm, there are a few places to go if you’re after a night of drinking and clubbing. Hit Papyrus or Sundowner and you’ll quickly make new friends dancing the night away til sunrise. Executive Carwash in Kimihurura is actually a car wash, but also doubles as a sort of open-air dancehall-barbecue joint, with live Rwandan music, dancing and nyama choma (Kenyan grilled meat).

Because restaurants and bars in Kigali come and go with great frequency, be sure to call or ask your hotel’s concierge before you head out to make sure the establishment still exists. 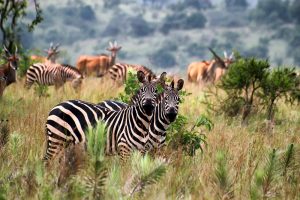 It’s possible to climb Mount Kigali, which looms over the suburb of Nyamirombo, in about 30 minutes. The views of the city on one side and the Rwandan plains on the other are stunning. You can also ride a bike or a horse over the plains, if you so desire.

Take a bus to Butare (also known as Huye) 90 minutes south of Kigali and visit the National Museum, which was a gift from the Belgians to Rwanda in 1989 to celebrate 25 years of independence. The museum features ethnographic artifacts, photographic collections, and insights into the development of the country form ancient times to the present.

Akagera National Park is about two and a half hours from Kigali, and is a great place to see wildlife: giraffes, elephants, hippos, baboons, zebra, impala live in the preserve, which can be visited for a day, or overnight.

Parc National des Volcans (Volcanoes National Park) is a little tough to do as a day trip, but is a must-see for those interested in Rwanda’s famous mountain gorillas. (This is the park where Dian Fossey did her research before she was tragically killed.) Only a limited number of passes are issued per day, so if you want to visit, plan and book well in advance. There are also eight dormant volcanoes you can hike, hence the park’s name.

As an alternative you can fly into Entebbe airport in Uganda and take a nine-hour bus ride to Kigali, which some travelers find to be cheaper.

By road: There are numerous bus lines that serve locations within Rwanda and neighboring Burundi, as well as the aforementioned buses to Entebbe and Kampala. If you are coming from anywhere further afield than Kampala, you’ll probably want to fly to Kigali, unless you don’t mind hours and hours on the road.

Getting around in Kigali: There are modes of transit to suit every budget and level of comfort. Motorcycle taxis (motos) are the quickest and cheapest, but also the most harrowing. Matatus (shared minibus taxis) are the next level up, and are well-maintained, cheap and ubiquitous. Private taxis are either of the yellow-stripe variety or fleet vehicles and are the priciest option. Of course you can also rent a car and self-drive in Kigali, which is not difficult as the roads are well maintained and there is little danger of car-jacking or breakdowns. Cars cen be rented at the airport or at various points around the city.

Location: Kigali is located at the geographical center of Rwanda, in a hilly region where the elevation averages about around 1,300 m (4,270 ft).

Languages: Kinyarwanda is the native language of most Rwandans, but French and English are also official languages in Rwanda and are universally spoken in Kigali, though French is more prominent.

Visas: Nationals of Australia, Germany, Sweden, the UK and the USA can purchase a visa on arrival. Most others must get one in advance. Consult your country’s Rwandan embassy for the most up-to-the-minute information. (A single-entry visa is valid for 30 days; a multiple-entry visa is valid for 90 days.) Note: If you’re planning to visit Kenya and/or Uganda on the same trip, consider an East African Visa (EAV), which lets you enter all three countries on one single visa.

Money and banking: The currency of Rwanda is the franc (RWF). All major hotels and stores accept credit cards. There are ATMs and banks all over the downtown area and in various suburbs, as well as the airport. When changing money at a forex bureau or on the street, be aware that only US dollar bills dated Series 2009 or newer will be accepted.

Tipping and local customs: Unlike some other African cities, begging and bribery are not common in Kigali, so don’t give money to street children (if you ever encounter them), and don’t try to solve your legal problems with cash. Eating, drinking or smoking on the street is considered rude, as is dropping litter. And interestingly, wearing flip-flops in public is also frowned upon.

Safety: Kigali is incredibly safe as far as African capitals go, and it is not unheard of for visitors to walk around late at night without incident. There is a police presence seemingly everywhere you look. However, all the usual precautions should be taken: Stay alert and keep your hand on your wallet in crowded places; don’t get so drunk that you make yourself vulnerable; women should travel in groups at night; and don’t wear lots of expensive jewelry or carry electronics in a visible way.