You might think that a town whose main attraction is called ‘The Big Hole’ wouldn’t have a great deal to offer the visitor. When it comes to Kimberley, the largest city in the largest province of South Africa, you’d be quite, quite wrong.

Kimberley is the capital of the Northern Cape and while it is the most bustling settlement in the sparse province, it’s far from being a metropolis. A little over 200,000 people live in this pretty city whose wide roads are lined with rows of Victorian homes. Partly due to its out-of-the-way location some 500km from Johannesburg, partly due to the surrounding landscape of flat, sweeping plains and partly because of Kimberley’s historic ties to diamond mining, there’s an unmistakable frontier feel here. You almost expect to see pioneers riding horses across a tumbleweed-strewn dust trap, seeking to find their fortunes. The city’s rich history greets you at every turn, allowing you not only to read about it, but to experience, to explore, to eat, sleep and drink Kimberley’s mesmerising past. 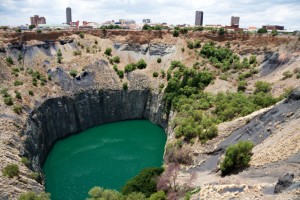 A trip to Kimberley is filled with historical tales and perhaps the best place to begin your journey is at the city’s most famous attraction: The Big Hole. The world’s largest hand-dug hole wasn’t meant to be this way – it’s really a victim of its own success, a 214m deep chasm caused by countless diamond claims collapsing in on themselves. The hole hasn’t been mined since 1914 and is today the site of a stellar museum complex.  To appreciate the hole and to understand the exhibits around it, you should begin by watching the superb 20-minute video detailing the unearthing of those first gems in 1871, and the ensuing diamond rush that gave birth to the town. Once you’ve got an idea of what life in early Kimberley – then known as New Rush – was like, stroll the sandy streets of the mock-up Victorian village alongside The Big Hole. Many of the buildings here are original structures, relocated from their initial sites to make a quirky town of corrugated churches, pubs, shops and even a boxing academy,  all patronised by mannequins in period costume. If you feel like rubbing shoulders with someone a little more lifelike, there are functioning restaurants here too, as well as a simple guest house continuing the bygone theme.

Although lesser-known than their Zulu counterparts, the battlefields around Kimberley certainly warrant a visit. The region saw plenty of action during the second Anglo-Boer War, with the city itself being the site of an important siege at the end of the 19th century. You can visit the battle sites by yourself, but unless you come equipped with a well-researched book – or some serious knowledge of the area – you‘re not going to get a great deal out of the empty fields.  Instead, grab a guide in Kimberley and get an in-depth look at the various sites in the city outskirts, most notably Magersfontein, 40km south, where Boer forces defeated a British regiment intent on ending the city’s siege.

The comprehensive McGregor Museum is vastly underrated and warrants a good few hours of nosing around. Start by perusing the detailed timeline of the apartheid era, with local happenings running alongside their national counterparts. Read up too on the Siege of Kimberley and see a mock-up of the quarters where Cecil Rhodes whiled away the 124 days that his adopted hometown was under attack. The museum is based in a former sanatorium, a magnificent building fringed with balconies and featuring an impressive interior staircase. Ask staff about the satellite museums, with a range of exhibits in some of Kimberley’s most striking historic houses.

Haunted bedrooms, demanding monarchs, powerful friendships, diamond deals – it’s all happened at The Kimberley Club. These days women are allowed membership to the former gentleman’s club and even the general public can enjoy the elaborate bar and sit where diamond magnates black-balled wannabe members who didn’t measure up. The club now features two restaurants as well as a boutique hotel, where you can sleep in the room that King George VI and family used on their 1947 visit to South Africa. For formal dining, step back in time at the Rhodes Grill, or if you’re looking for something lighter, grab a tapas-type dish on Café Vitello’s terrace and look out for the north-facing arrow etched into the patio – apparently installed to assist Rhodes as he pointed towards his future empire (other members were known to mock his sense of direction – or lack thereof).

The Halfway House has been referred to as the world’s only ‘drive-in bar’, though these days the pub strongly discourages you from drinking at the wheel. Theoretically though, if you honk your horn you can get your order delivered directly to your steed. It’s a tradition that harks back to the era of diamond claims and unruly taverns – the era in which Kimberley was founded. Whether it was because he was too short to dismount and remount easily, or too drunk to try, Cecil Rhodes preferred to stay atop his horse outside “The Half” and so a tradition was born. Not far away there’s a statue of Rhodes, immortalised atop his trusty mount.

Kimberley has many historical homes-turned-guest houses, but there’s nowhere quite as quirky as Gum Tree Lodge if you’re looking for a dose of local history with your overnight accommodation. The rooms here are far from lavish, but that is part of the place’s charm, for Gum Tree Lodge hasn’t always been a backpacker-friendly place to stay – the complex was built as a mine compound for migrant labourers and some of the pokier rooms were once holding cells for workers who had been caught shoving diamonds into their socks when they thought nobody was looking.

With all the gun battles, mine collapses and riotous bar brawls that have taken place in Kimberley throughout the years, it’s no surprise that the city abounds in tales of hauntings. Pre-booked ghost tours start at the city’s Honoured Dead Memorial, built to remember 27 British soldiers who died defending Kimberley during the siege, and take in a range of eerie sights. Itineraries vary but usually include Magersfontein, the Kimberley Club and some of the city’s 100-plus haunted houses. Look out for discontent librarians, wailing babies and melancholy bagpipe-players as you explore Kimberley after dark.