Windhoek doesn’t look like your typical African capital city. Not only is it quite safe, it also doesn’t have the clutter and human chaos found in so many of the other major cities across the continent. And while the city feels almost provincial when compared to Johannesburg or Lagos, when compared with the rest of Namibia, it holds its on and is a testament to the history of the wild and mostly empty country.

Windhoek is a newer city — it was founded in the 1890s by German soldiers. (By comparison, the first Europeans arrived in Cape Town in the mid 1600s.) Evidence of the country’s German heritage can be seen everywhere, with neo-baroque cathedrals and castles sitting side-by-side with steel-and-glass high rises. Namibia itself is one of the youngest countries in the world, having gained independence in 1990, and its capital is the place to experience the modern culture and energy of the nation.

Windhoek sits at the crossroads of Namibia, about a four-hour drive from Swakopmund to the west and the border of Botswana to the east. It’s also bordered by the Eros Mountains to the north and the Auas mountains to the south. The high elevation of over 1600 meters is complimented by low green hills, dry clean air, and a healthy highland climate.

While most people don’t go on vacation to look at rocks, there are some in Windhoek that are rather interesting and worth a stop. In the middle of the Post St. Mall, you’ll find a sculpture made from 33 meteorites that fell during the Gibeon meteor shower many millennia ago. The boulders did not originally land in Windhoek, but were transported here from the town of Gibeon where the shower dumped some 21 tons of mostly ferrous iron rocks. You’ll also find the rocks incorporated into local jewelry designs. 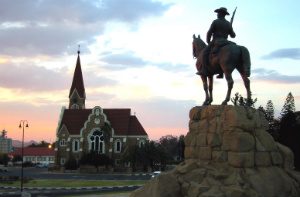 To learn about another prehistoric event — A Stone Age elephant hunt — visitors can head over to Zoo Park. The remains of two elephants and a couple of quartz tools were found here in the early 1960s, and today you can learn about the discovery at the park’s elephant column, which is the work of Namibian sculptor Dorthe Berner. An elephant skull fossil also sits on top of the sculpture. The park is also a popular local picnic spot, perfect for packing a few bags of food and enjoying a sunny, leisurely day in the city.

Alte Feste is Windhoek’s oldest surviving building, a stately whitewashed affair dating back to the early 1890s. It houses the historical section of the State Museum with exhibits on Namibia’s independence struggle, as well as some truly bizarre displays. History lovers will enjoy walking through the museum and learning little known facts about the country. The National Art Gallery is also worth a visit, and features work by local artists in various mediums, some of which is for sale. It houses a permanent collection of works reflecting Namibia’s history and nature.

Architecture lovers will enjoy Independence Ave, which is home to three impressive colonial buildings designed by German architect Willi Sander at the turn of the 20th century. The city’s most famous building, the art nouveau meets neo-Gothic Christus Kirche, built from local sandstone in 1907 is also in this area. Standing on a traffic island in the CBD, the German Lutheran church is impossible to miss, a striking piece of architecture that manages to amalgamate two completely different styles.

The choice of hotels in Windhoek is somewhat limited, but there are a few decent options at the mid to higher end of the spectrum.

One of the best places to stay in the city is Windhoek’s most royal B&B, the historic Hotel Heinitzburg, which is located inside a castle commissioned in 1914 by Count von Schwerin for his fiancée Margarethe von Heinitz. Rooms are limited to just 16 en-suite options, but all of them are tastefully decorated and offer a unique design. And if you’re visiting in winter, there is a refreshing heated swimming pool to warm up during the evenings. 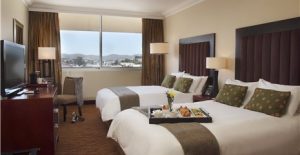 The Kalahari Sands Hotel is another great option in Windhoek for those that want to stay a few nights and relax. There is a wellness facility located on the top of a panoramic rooftop, giving guests fantastic views of the area. The hotel features 173 of the nicest rooms Namibia has to offer. Visitors will also enjoying hanging out at the onsite casino, the most well-known in the country.

Travelers wanting a boutique experience should check into the aptly named Belvedere Boutique Hotel. This luxury accommodation is designed for both business travelers and tourists, featuring 18 rooms, a conference center,  a small spa, an outdoor swimming pool, and a lush outdoor garden for enjoying the afternoon. Those traveling with family or needing more space will definitely want to inquire about the penthouse suite.

Dining options in Windhoek are fairly diverse considering the small size of the city, with plenty of tasty places to indulge.

One of these is a Windhoek institution, Luigi & the Fish, which serves all sorts of fish and seafood alongside meat, pizza, and veggie options. You can also find several game options on the menu if you want to get a taste of real Africa. For something special, go for their gigantic seafood paella full of calamari and other fresh catches from the Atlantic. 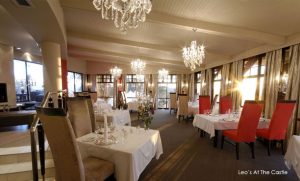 Leo’s at the Castle (Courtesy of heinitzburg.com)

Another fantastic place to check out is Leo’s at the Castle, located inside the Hotel Heinitzburg. This eatery is Windhoek’s finest dining experience and has served real royals before. It’s also probably the most expensive restaurant in the city (just a warning). However, the money is worth it, as you’ll be able to get a fabulous view of the entire city, dine on haute cusine, and sip wine while watching the sunset over the horizon.

For a little bit of nightlife action after your meal, start at El Cubano for a little Havana in Africa. It is a popular lounge that does excellent mojitos, and is the place to puff on an imported Cuban cigar. Clubs don’t get going before 11 p.m., at which point you can head to Funky Lab or La Dee Da’s for dancing – the latter focuses on several African styles.

Another great option for drinks is Joe’s Beer House, which is Windhoek’s most legendary drinking spot, and always packed with locals, expats, and tourists. You’ll find a huge choice of Namibian and German beers, with plenty of tables under a faux African boma.

The Post St. Mall is the main place to go in the city for shopping and is more of an elevated pedestrian walkway. It serves as Windhoek’s main shopping district and is filled with vendors selling everything from clothing to curios, to local art and jewelry. The Mall is also home to a mix of several coffee shops and eateries.

Around the mall, you’ll find a number of small shopping centers scattered about, mostly catering to the daily needs of locals. And if you can’t find what you need at the mall or the shops downtown, you can head to Maerua Mall in the south of the city for more browsing. Be mindful that many of the shops close on Sunday or are only open until 1 p.m.

Visitors looking to see wildlife without going too far can head to the beautiful Daan Viljoen Game Park that sits in the Khomas Hochland about 18km west of Windhoek. Because there are no dangerous animals, visitors can wander freely through desert-like hills and valleys. You’ll almost certainly see gemsbok, kudu, mountain zebras, springbok, hartebeest, eland and up to 200 bird species. The park has numerous hiking opportunities and a restaurant.

Most of the other worthy excursions are further afield, such as the Namib-Naukluft National Park, Etosha National Park, Sossusvlei, and the Skeleton Coast. Fortunately, for most people heading to Namibia, at least a few of those places are already on their itinerary and Windhoek remains the prime gateway to the country for these kind of adventures.

Most people will come into the city through the Hosea Kutako International Airport., around 40km outside of the city. However, if you’re traveling domestically, it’s likely that you’ll arrive at the smaller Eros airport. Visitors can also get into the city by road (the B1 or B2), by train, or by bus. Once in the city, there are numerous places to hire a car either at the airports or in downtown. Most of the touristy hotels are in the center of the city, where one can easily reach the surrounding shops and restaurants on foot. Visitors wanting to explore more of the city should grab a taxi, as the city has no official public transportation system.

Languages: English is Namibia’s official language and is spoken widely in Windhoek, though 50% of the population speaks Afrikaans, too. German is widely used in tourist hotels. Other languages include Oshiwambo, Damara, and Rukwangali.

Weather: Windhoek has a semi-arid climate and experiences long hot days in the summer (averaging 31C/88F), along with brisk cool days in the winter (averaging 23C/64F). The rainy season lasts from January through March but rainfall is generally sparse.

Health and Safety: Windhoek is a relatively safe city, but travelers should still exercise common precautions in Africa such as being aware of pickpockets or avoiding driving on the roads at night.

Money and banking: The currency in Namibia is the Namibian dollar and it is tied to the value of the South African rand. There are ATM’s at the airport and several locations downtown. Banking options in the city center include Nedbank and Bank Windhoek.