We stepped out of the train into the sizzling dry heat at the station. It was spring in Marrakech, but it already felt like summer.

“Just like Florida,” I thought to myself. My fiancé, Joe, was looking around as well, and nudged me. 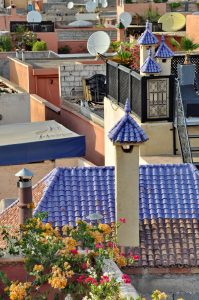 “Do you have your thing on?” he asked, referring to my cochlear implant.

“No, the batteries are out,” I said, half lying. In reality, I was visually overloaded by my new surroundings and I didn’t want to concentrate on sounds.

Joe flagged a taxi and the petite, beige vehicle pulled up to the curb by us.

By then, we were already somewhat defeated by the string of taxi drivers we had dealt with over the previous few days in Rabat and Casablanca. It’s rare in Morocco for taxi drivers to speak English, and if you hand them a note with your hotel address and it’s NOT scribbled in Arabic, they’ll usually shake their heads and drive away, leaving you stranded on the street. If you speak some French (which Joe does), you’ll have a 50-50 shot of successfully navigating your driver through the city.

We got into the cab. Joe attempted to communicate with the driver, pulled out his own map and pointed at the location. As I watched their halting, awkward attempts to overcome the language barrier, I was reminded of how it is for me in my own country. At that very moment, I felt like my hearing fiancé was getting a dose of what it’s like to be a deaf person in a hearing world.

Once the driver and Joe understood each other, we pressed on. We drove past brilliant, modern, sand-colored buildings with wild roses and bougainvilleas in full bloom sprouting randomly. I was mesmerized by the smell of the ripe orange trees lining the streets, and the sight of stray cats lounging lazily under the branches. I stared at the majestic Atlas Mountains in the distance — they looked like slumbering giants with snow-capped peaks and a bottomless valley that disappeared into a mirage. I was agape at the true beauty of Marrakech — I never expected it to be like that.  It was truly special; while Rabat and Casablanca were marvels in their own way, they simply didn’t measure up to Marrakech. 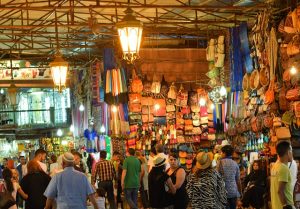 It’s true what they say about deaf people. When you are robbed of one of your senses, the others are heightened. And there is no better place to put that to the test than in Marrakech’s souks. So after checking into our hotel and putting our things away, the first thing we wanted to do was check out the souks. As our hotel shuttle dropped us off in front of the art bazaar, I was instantly overwhelmed by the exotic eye candy: vividly colored carpets draped over balconies, hanging bronze lamps with glimmering lights, and bees swarming over the stalls of honey-coated pastries. Everywhere I looked, there was something new for my eyes, nose and fingers to fixate on.

Moroccan street vendors are friendly, but it’s not hard to sense their desperation as they aggressively coax shoppers to come closer, and wax lyrical about their pashmina scarves or Berber trinkets. But when the vendors attempted to persuade me into their stall, I smiled, pointed at my ears to imply my deafness, and was quickly left alone.

As evening approached, Joe and I went outside the souk to see the famous food stands of Djemaa El Fna. Billows of steam and a strong odor of grilled meat wafted over us from the direction of the cooked lamb’s heads and sliced beef, which was being prepared for locals and tourists on picnic tables. Because I have a serious sweet tooth, I made my way toward one of the pastry street carts, and admired delicately-crafted treats that I had never seen before. The vendor handed me a cookie to sample, and I nodded my head to thank him before biting in. I was immediately enveloped by the smell of jasmine and citrus as the treat rolled around my tongue. It brought back fond memories of when I used to play in my grandmother’s flower garden in Florida. If perfume came in the shape of a cookie, this would be it. 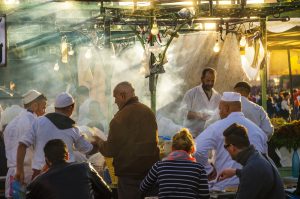 After the sun went down and the lights of Djemaa El Fna lit up, we walked away, looking for a place to eat. At our restaurant, Joe was happily fawning over his fresh olives while a group of Berber musicians strummed their one-stringed guitars. I could feel the vibration of the intoxicating rhythm under my feet. When my seafood tagine arrived, I was consumed by the smell of simmering Moroccan spices. As I bit into the haddock I could taste the water from the Mediterranean sea. After our meal, we lingered on the balcony and gazed at the 1000-year-old medina tower standing proudly, shining its light over the city.

A few days later, a cab driver took our luggage and whisked us away to the airport.

Except for when I was inside hotels, I had just spent the better part of three days with my implant turned off. It really wasn’t necessary, and would have prevented me from concentrating on the incredible sights, smells, textures and taste of Marrakech.

We took our seats on the plane. Sandwiched between Joe and a stranger, I leaned over to the window seat to get a better view. The plane roared as we took off, and my nose was pressed up against the window, bidding the Atlas Mountains farewell.

“Would you come back?” Joe asked as he tapped my shoulder, beckoning me to lip-read his words.

I watched the city recede in the distance and shrink to the size of Legos. A stewardess smiled and handed me my complimentary pretzels. I bit into a pretzel, but it tasted incredibly bland.

“We’re definitely coming back,” I replied.