Seen from above in dawn light, Ngorongoro Crater is one of the great sights of the African morning. Herds of wildlife range across open savannah grasslands, losing themselves in the swamps and dense acacia woodlands as mist rises from the salt lake: here is a lost paradise of plenty.

All across the crater floor – which extends 19km across, covering 264km as one of the world’s largest volcanic calderas not filled with water – there is a sense of Africa as it once was. Surrounded by steep, forested walls on all but one side of the crater, walls that rise between 400m and 610m from the floor to the rim, there is an irresistible natural drama at work and not even the presence of Maasai herders, their cattle swarming down off the crater rim with the light, can change that. 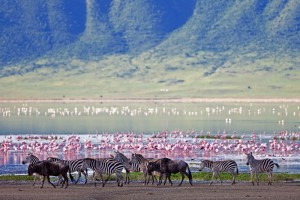 Down in the crater itself, there are so many scenes of unimaginable abundance. Wildebeest, zebra, buffalo and Grant’s gazelle are present in great numbers, but there are also eland, warthog, hartebeest, bushbuck, waterbuck and Bohor’s reedbuck. As many as 300 elephants roam Ngorongoro, along with around 30 critically endangered black rhinos. Watching over them are troublesome tribes of hyena, all 600 of them, as well as jackals of both the black- and golden-backed varieties.

And yes, there are lions, whose story is a remarkable tale of survival.

The Ngorongoro Crater has long been considered one of the best places on earth to see lions. Lion numbers here have waxed and waned, from a high of around 125 in 1975, when Ngorongoro had one of the densest populations of lions in Africa, to around 55 in 2014. Four lion prides now rule over this natural amphitheatre, feasting on the bounty of Ngorongoro’s self-contained world, this manageable microcosm of the African wild.

But these numbers conceal a darker story.

This story began in 1962 when a rain deluge flooded the crater and surrounding areas. Water streamed down the slopes and the floor was impassable to human traffic for months at a time. And what happened in their absence would forever change the world of the Ngorongoro lions. 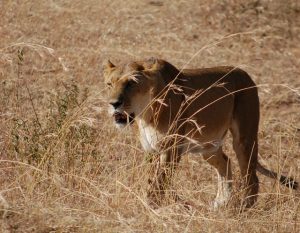 With the rains came a plague of biting flies known as stomoxys. Flourishing in the floods, the flies tormented the lions, sucking their blood and weakening them beyond repair. Soon the lions began to die off. Just nine females and one male remained.

Were this to happen elsewhere, more lions would surely have come, drawn by the abundant prey and an absence of lions. Seven males did, it is true, migrate into the crater over the three years that followed. But for three decades from 1965, no other lions descended into the crater, kept at bay by either the steep fortress walls of the crater or by the fiercely territorial habits of the prides that grew from those who had survived the plague of flies.

We know all of this thanks to a remarkable effort undertaken by the Serengeti Lion Project, one in which they appealed for photos from decades of tourist visits. From these photos, scientists could identify every lion known to have been present down in Ngorongoro.

Although lion numbers grew tenfold in the 10 years to 1975, the damage had already been done: the lions had passed through a genetic bottleneck, one that would haunt Ngorongoro’s inbred lions for generations to come.

Why that bottleneck matters is simple. Genetic variation is an insurance policy against extinction. For species with normal genetic variation, a change in conditions – climate change, the emergence of new viral or bacteriological strains, the clearing of habitat – can be weathered because sufficient individuals should be able to draw on the necessary genetic immunity for the species to survive. In the case of the Ngorongoro lions, so the theory goes, if a single lion is affected, all Ngorongoro lions should be similarly at risk, so similar are their genes. The low genetic variability should also give rise to lower fertility and to a high proportion of congenital birth defects. 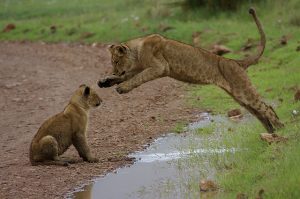 Such is their vulnerability that it is remarkable that there are any lions left in Ngorongoro at all. And yet, somehow, the lions persist and a new scheme may just save them from themselves.

Part of the problem for the lions of Ngorongoro is that a human belt of Maasai communities, growing all the time, separates Ngorongoro from the Serengeti plains, these two iconic lion lands of northern Tanzania. Thus it is that very few lions are able to cross between the two. With very little interchange between the two lion populations, the gene pool of the crater’s lions remains stagnant.

The solution, according to the Serengeti Lion Project, is at once simple and devilishly complicated. First, young Maasai warriors who once tried to kill lions in order to prove their readiness to become warriors, to prove their manhood, now patrol Maasai lands, trying to keep lions and Maasai cattle apart, preventing young Maasai from hunting lions and convincing Maasai communities that lions are worth more alive than they are dead.

It is an approach that has worked to stunning effect in the Amboseli region of southern Kenya, where lion numbers have recovered and conflict between lions and Maasai communities has fallen dramatically.

But this project in Ngorongoro differs from the Kenyan version in one very important detail. In Kenya, the program known as Lion Guardians is complemented by a rival scheme that offers compensation to the Maasai for cattle lost to lions and other predators. In Ngorongoro, a fund will instead pay the Maasai communities for the lions that are present upon Maasai land. In other words, the Maasai will receive money for the lions that live, not the cows that die.

It is an innovative approach, but if it works then the lions of Ngorongoro, one of Africa’s most iconic lion lands, may have a future after all.

This article was originally published on June 24, 2015.