The rhythm of your average, everyday Botswana safari goes something like this: fly into the country (usually Kasane or Maun), wait in a nice hotel for a day or two and then fly in to one of the luxury lodges of the Okavango Delta or the Kalahari, before returning home again. There are variations on the theme – you might hop between lodges or even regions – but the essential elements remain the same: high-end tourism where you spend your time being pampered and guided around one of the most beautiful places on earth. 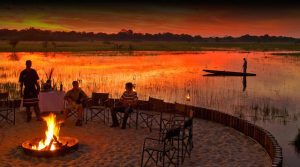 It is a model that Botswana’s government has been keen to promote so as to avoid the pitfalls and negative cultural consequences of mass tourism. And for those who can afford it, it produces a more intimate form of safari, fostering close encounters with the southern African wilderness without the crowds.

But there is an alternative, which achieves a similar effect.

On my first visit to Botswana, I flew to Johannesburg, picked up my 4WD camper and drove north to spend a month in the wilds of Botswana. The fact that I had never before driven a 4WD proved to be a minor detail – before leaving Johannesburg, I took a 4WD off-road course that took me into situations that were far more perilous than anything I experienced once on the road in Botswana.

And now I wouldn’t travel any other way.

How it works is relatively simple. I arranged my vehicle through Drive Botswana, one of the best of the companies that organises self-guided safaris in Botswana and across southern Africa. Together with them, I worked out an itinerary which involved booking a string of campsites across the country, saving me the hassle of trying to make the arrangements myself. And then I was on my way.

The first thing I noticed was how wonderfully empty are the roads of the country. If you’ve travelled in Africa before, and have felt uncomfortable with the incessant, often fear-inspiring traffic of Kenya, Tanzania or South Africa, Botswana is blissfully quiet. It is, after all, one of the least densely populated countries on earth. That did, of course, mean that finding someone to ask for directions was often difficult, but in truth it was rarely needed – the GPS system of Tracks 4 Africa kept me on track.

If the tarmac roads that connected Botswana’s larger towns were quiet, the sandy tracks that criss-crossed the Kalahari and Okavango were positively deserted. On one blissful day, in the Central Kalahari Game Reserve, one of Africa’s largest protected areas, I drove within sight of lions and leopards and cheetahs, I encountered bat-eared foxes and a honey badger, marvelled at gemsbok and giraffe. And not once in the whole day did I see another person or another vehicle.

My 4WD vehicle was another revelation, a comfortable portable home that I took with me wherever I went and which folded out to reveal so many comforts that I never expected to associate with a self-guided camping holiday in Africa – beds, a table and chairs, a cooking stove, a fridge, a basic shower, even a shaving mirror and power points to plug in the laptop at the end of the day.

The campsites themselves inhabit Botswana’s wild places; cleared ground, often with a toilet shelter, sometimes a shower block, sometimes hundreds of kilometres from the nearest human settlements. Occasionally they cluster together, an agreeable companionship of transient visitors just beyond the trees. Elsewhere, it is a campsite here, another over those low hills in the distance, yet another on the far shore of the salt pan. 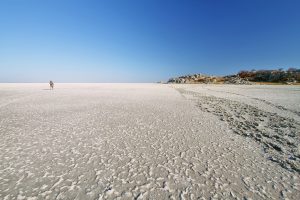 A luxury lodge the experience may not be, but there is a certain kind of magic to be found by cooking your meal out in the wilds of the Kalahari or Okavango then lying down to rest, in perfect stillness, as the night sounds of Africa emerge from the darkness.

Some of my happiest African memories came from such nights. My very first night, on the shores of the Makgadikgadi salt pans, feeling as if I had washed up upon an island, gazing out upon a horizon that never seemed to end. Or listening to hippos go to war and winds rage through the reeds deep in the Delta. Or lying utterly still, listening as lions, roaring, drew near to where I lay in the last hours before dawn.

But it was the sense of freedom that I remember most, and it is that same freedom that always draws me back. No-one told me where I should go, or how long I should linger over breakfast or when I should make camp at the end of the morning safari drive. And no-one was there, whispering in my ear, telling that we should move when all I really wanted to do was to stay and contemplate lions.

On one occasion, I spent an entire morning inching along a riverbank, following a pride of lions with other vehicles neither seen nor heard. Or I slept in a remote corner of the Kalahari, revelling in the knowledge that no other member of my species was closer than 50km from where I slept.

To explore Botswana in this way requires a particular mindset. For a start, the days are long, there are moments of uncertainty as to which track to take, and the knowledge that only canvas separates you from the lions of the night can be unnerving. The companionship of the fly-in-fly-out safari is replaced by a solitude unrivalled in its silence and, at times, isolation.

But I have never felt so at one with my African surroundings as I have on those remote Botswana nights when the sounds and frisson of the darkness enveloped me in ways that were sometimes unsettling, but just often exhilarating. In the spectral beauty of dawn, in the building anticipation of the approaching night, wildlife encounters of the most spectacular kind suddenly seemed possible. And then, finally, at journey’s end, I felt as if I had come to know Africa – or, rather, this corner of it – like never before.