Kenya’s wild places rank among Africa’s best places to see lions, leopards and cheetahs. These are the carnivores that bring the savannah alive, the apex predators that bring fear and frisson to vast herds of prey wildlife and safari-goers alike, animating the East African plains by their mere presence. And if you know where to look, you may just see all three in a single day.

It is a little-known fact that three-quarters of Kenya’s wildlife lives outside of officially protected areas, and the country’s big cats are no exception to this rule. While the parks remain the best places to see the big cats if your time is limited, the privately-run conservancies of Laikipia and surrounding the Masai Mara are increasingly winning plaudits for their big-cat-viewing opportunities. Best of all, their policies of limited access and exclusive accommodation opportunities keep away the herds of safari vehicles. The result is a more intimate experience of watching wildlife – very often it’s just you and the big cats in some remote corner of the African wilderness. 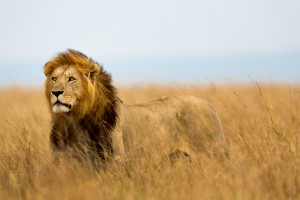 The Masai Mara is a safari cliché and there’s a very good reason that the BBC filmed its classic Big Cat Diary here. Lion prides stalk the plains, building their family groups twenty and thirty strong around the river confluences and marshes that dominate the central Mara. Leopards keep to the riverine edges, waiting for the time when zebra and wildebeest inevitably, reluctantly come down to drink. And cheetahs, the bottom of the big cat food chain, scan the horizon from their termite mound vantage points. But the Masai Mara National Reserve, as the best known safari park in Kenya, is often overrun with visitors; the surrounding private conservancies have just as many cats, but without the crowds.

Kenya’s biggest park is also arguably its wildest, an epic, red-soil territory of rugged mountains, endless plains and palm-fringed rivers. It was in Tsavo that the legend of man-eating lions was born in the late nineteenth century, and it remains a stronghold of lions – the two Tsavo parks are home to an estimated 700 lions, one-third of all lions in Kenya. Tsavo West is renowned for its leopards, while in Tsavo East cheetahs are commonly seen on the plains east of the Aruba Dam.

The Amboseli ecosystem is famous for its elephants set against a backdrop of Mount Kilimanjaro, but lions and cheetahs are also commonly sighted here throughout the dry season. As conflict between predators and Maasai herders beyond the park’s boundaries simmers, the park itself has become a refuge and lion hotspot, a protected place with abundant game and tall grasses to conceal their approach. Cheetahs, too, love this open country, and in the 2014 dry season visitors were treated to a family of five cheetahs gambolling regularly across Amboseli’s dry savannah.

As Kenya’s human population crowds ever closer, parks like Lake Nakuru have become islands in a vast sea of humanity. Inhabiting this island, one of the country’s most compact parks, is a rare population of tree-climbing lions. Lake Nakuru is also one of the best places in Kenya to see leopards. The lesson of Lake Nakuru is, therefore, simple: look up into the branches as or you might miss the cats altogether. While you scour the undergrowth for cats, there’s the added bonus of a small population of black rhinos foraging and choughing their way through the foliage.