In response to increasing demand from green-conscious travelers, almost every lodge these days seems to offer a nod towards being “eco-friendly,” by asking guests to re-use towels and providing bio-degradable soap, for example. However, genuinely claiming the title of eco-lodge involves more than just what toiletries the bathrooms are stocked with.

Committing to environmental practices needs a holistic approach to all aspects of setting up and running a lodge, from conservation of the land around it, to minimizing the physical footprint of the lodge on the landscape, to making sure local communities benefit from tourist dollars, to using renewable energy wherever possible.

Southern Africa has some of the world’s best eco-lodges, some of which have had a significant impact on wildlife and habitat conservation. These are the kinds of places you want to be spending your money at: just by travelling there you’re helping to preserve the environment.

Located in valley on top of the Soutpansberg Mountains in South Africa’s far northern Limpopo Province, Leshiba Wilderness is built on the site of an old Venda village using traditional building materials, so the stylish and unique Venda-style huts seem to blend seamlessly into the environment. The lodge is off the grid, running on solar power from 50 panels, growing organic produce in the garden and drawing water from three solar boreholes. Part of the Vhembe Biosphere Reserve, an incredibly biodiverse area of South Africa, Leshiba conserves 2600 hectares of land, protecting animals such as white rhino, giraffe, the rare brown hyena, porcupines, pangolins and leopard, as well as over 250 bird species, which you can discover on game drives and guided walks.

Established 15 years ago in a remote corner of northwestern Mozambique, Nkwichi Lodge has always been centred on sustainability, conservation and community development. Nkwichi’s founders set up the Manda Wilderness Project, an initiative to bring the communities of the area together and educate them on using resources sustainably and created a 120 000-hectare reserve in the area to conserve wildlife (such as wild dog, elephant, duiker, sable and leopard) that’s been suffering declining numbers over the years. The solar-powered lodge, which is staffed by people from neighbouring villages, is low-impact, with eco-composting toilets and only six chalets and two houses built around boulders on the sandy shores of the turquoise waters of Lake Malawi, where you can swim, snorkel or cruise on a dhow. Built out of local natural material such as bamboo and thatching grass, the lodge is designed so that if it was removed then the environment would return to its natural state within two years. 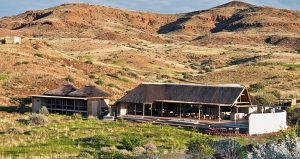 In Namibia’s first joint venture between a safari company and local villagers, Wilderness Safaris and the Torra community in Damaraland’s partnership has resulted in the establishment of the 352 000-hectare Torra Conservancy where desert-adapted animals (such as endangered black rhinos and rare desert elephants) are now protected from poaching. On the conservancy is the small luxury Damaraland Camp, boasting amazing views over the desert plains, which is owned and largely run by the local community. The 10 adobe-styled rooms have been built to be as eco-friendly as possible, for example using eco-sandbags in the walls and materials such as canvas fabric, reeds, gum poles and grass thatch, and the camp makes use of energy-efficient solutions for power, water and waste to minimize the environmental footprint. 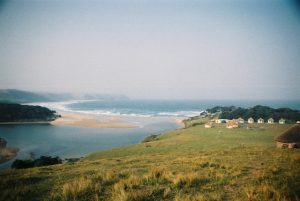 Bulungula proves that you don’t have to spend a lot of money to create an environmentally sustainable lodge. The 10 rondavels at the rustic Bulungula, located on a totally undeveloped stretch of the beautiful Wild Coast in the Eastern Cape, are sustained by sun, wind and rain and feature compost toilets. The lodge is co-owned and managed by members of the nearby Xhosa village, and guests are encouraged to spend time in the village getting to know the community, and getting involved in activities such as beer brewing. Recognised by numerous awards, Bulungula is one of the best examples in the country of community-based tourism, and offers a chance for visitors to get a taste of rural South African life.

An intimate camp on a Robinson Crusoe-style private island in the Zambezi River close to the mighty Victoria Falls, Sindabezi has only five cottages to stay in, with views across the floodplains of the Zambezi and the national park. Sindabezi is entirely off the grid, and draws its power (including for the waste and water system) form solar energy, while food from the lodge’s organic garden is prepared on gas stoves. At night times the island is lit up entirely with lanterns and candles, making you feel like you really are in a remote wilderness. The camp also uses wood from sustainable forests, and has a water bottling system that saves an estimated 20,000 water bottles a year. Activities here include guided bush walks, fishing, game drives, canoeing on the Zambezi and visits to Victoria Falls. 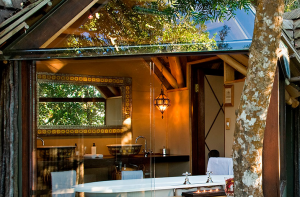 Winning awards as Africa’s leading green hotel, Phantom Forest Eco Reserve is set on 137 hectares of a private nature reserve just outside of the coastal town of Knysna on the Garden Route. The eco reserve conserves a unique bio-diversity of Afromontane forest, Cape coastal fynbos and estuarine wetland, home to over 150 bird species, as well as bushbuck, bush pig, grysbok and the rare blue duiker. The lodge has been built out of alien vegetation cleared from the reserve, while waste water is recycled through the lodge’s sewerage plant and filtered back into the ground. The suites, which are luxuriously romantic, with glass-roofed bathrooms and private decks looking out of over the forest, feel like tree houses for grown ups. No trees were cut down to build them, so when you stay there you feel like you’re part of the forest.