If you thought that Joburg was all about business and had little in the way of history, think again. Here is just a tiny glimpse into a few of the incredible historical offerings in Johannesburg.

It is a miracle of a city, especially considering it was founded in a frenzy of greed and oppression, a result of the madness that infects the minds of men obsessed with gold.

The fourth world gold rush was in the Witwatersrand, a huge gold-rich geological phenomenon not far from the center of modern-day Johannesburg. Like all gold rushes, this one attracted ambitious dreamers, diggers and opportunists from all over the world.

Between 1886 and 1896 this area went from mining none of the world’s gold, to extracting a whopping 23% of it. Just a year after mining commenced, the JSE (Johannesburg Stock Exchange) was formed, and the area now known as the Financial District grew organically around this money-spinning seam of gold.

It soon became apparent that this gold was not suited for staked claims being worked by individuals. Heavy machinery and cheap labourers would be needed.

This group of men were wealthy. Many had made their fortunes in the diamond fields of Kimberley, and as such knew that by putting capital investment into the expensive machinery required to mine this deep seated gold they could seize control of the entire industry, and benefit from the power and wealth that such a position guaranteed.

Shrewd, ruthless, visionary and unscrupulous are all words that apply to these businessmen. Getting the gold out of the ground required a staggering amount a manual labour. This labour incurred costs and reduced profits in a way that the mine owners would not tolerate. So the Randlords forced workers to live in nearly intolerable conditions, and paid them slave wages.

This museum is housed in what was originally a compound for municipal workers employed at the power station in Newtown, near the Central Business District in downtown Johannesburg.

It gives an idea of the living conditions of the mine workers, which were brutal. Grown men were stripped of all dignity and had no place to go for a little privacy. Showers occupied a single room that was nothing more than four walls and four shower heads. The sleeping quarters housed up to 40 men each, and did not contain beds. The men slept in rows on raised concrete slabs, separated from the next person by a 5cm high strip of wood. Above these “beds” were wooden and metal shelves where an equal number of men slept. Each room had a small coal stove for warmth and cooking, and any remaining space was taken up by washing and personal possessions.

The museum compound highlights the stark contrast between the living space allocated to the migrant labourers, and that of the rich white bosses.

One of the rooms is dedicated to photographs, letters and press clippings that convey the stories of the migrant workers and their families. The tears will flow freely as you read heart-breaking letters pleading for improved living conditions. Stories of lonely men missing their wives, children and the rural land they are connected to. Brave women, left to raise families alone while trying to assure their husbands that they will be alright, as the men return to the mines for another year with only the anticipation of the next short visit home to sustain them.

It is this misery and suffering that built Johannesburg. And yet, it is a story of hope. Because these workers never gave up, they fought and ultimately they won. To understand the Johannesburg of today, please visit this museum and pay your respects to the men and their families who played an unseen role in the creation of this city. 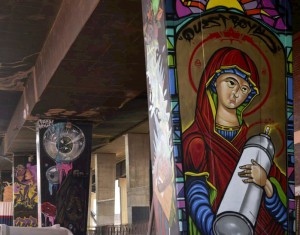 So named because it replaced at the turn of the 20th century an earlier settlement that had been destroyed by fire, Newtown was historically a racial melting pot, and the home to thousands of working-class men and women who worked in the factories, brickfields, and power stations around the CBD. It was also the epicentre of music, art and culture in the city. In many ways Newtown continues the legacy of these past eras — whether in the names of its streets honouring legendary artists, its cultural collections reflecting Johannesburg’s evolving material culture, or the plays from previous eras staged at local theatres.

When you leave the Workers’ Museum you’ll pass colourful street art, African-style cafes, the Market Theatre and the statue of Kippie Moektesi. Kippie was a jazz musician of note, and the Kippies Jazz Club was named after him. Go around a few corners and you’ll find the Neighbourgoods Market, which carries echoes of Newtown’s past as a hub for the fresh produce trade. This giant hall filled with every kind of food you can imagine, live music and craft beer is a popular weekend gathering place for Johannesburgers of all ages and races.

The restoration of Newtown as a desirable residential, retail and cultural suburb that celebrates the past and embraces the new makes it an exciting place to visit. To get a deeper sense of the area’s history, consider taking a guided three-hour tour of the area.

Of course one cannot talk about Johannesburg history without acknowledging the late Nelson Mandela. Many places intrinsic to his efforts to dismantle apartheid are found in and around the city. 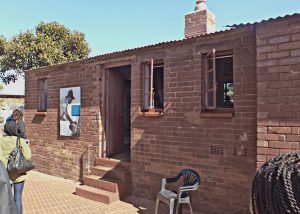 Alexandra: When Mandela first moved to Johannesburg in the early 1940s, he lived in a scruffy room in the township of Alexandra. Though there’s not much of touristic interest in the area, it’s worth exploring with an outfitter like Alexandra Tours if only to get a feel for the type of neighborhood most tourists never see. The tour visits the yard where his room was located, a local shebeen, and a school. A new Mandela museum is being built behind the yard, but the opening date is not definite yet.

Soweto: After Mandela left Alexandra, he eventually moved to the nearby township of Soweto. He lived at 8115 Vilakazi Street on and off from 1946 to 1962 (part of that time with second wife Winnie), and the house is now a museum. Interestingly, Archbishop Desmond Tutu also lived on Vilakazi Street for a time, making it the only street in the world to have housed two Nobel Peace Prize winners.

One way to easily locate all the sites in Johannesburg associated with Mandela is to download the Madiba’s Journey smartphone app, created by South African Tourism. It lists 14 Mandela sites in Gauteng, and at each one, the app allows you to listen to stories and facts about the place, making it easy to appreciate without a guide, or adding value to your guided experience. Attractions on the Madiba’s Journey (and City Sightseeing tours) include the Apartheid Museum, Constitution Hill, Vilakazi Street, Mandela House and the Hector Pieterson Memorial.

The best way to access many of the sites mentioned above is via Joburg’s City Sightseeing Bus. The circular route makes 11 stops and lets you hop on and off depending on your particular interests. A Soweto tour can be added for a small additional cost, and the combo deals make it a no-brainer.

If you want to read more about the history of Johannesburg, I highly recommend the 352-page The Joburg Book, edited by Nechama Brodie and published by PanMacmillan.