Called “mahali pa afya” in Swahili, meaning “a healthy dwelling place,” Mafia Island is a tiny island with a prominent place in the history of East Africa and some of the best diving along the Tanzanian coastline. Thanks to a recent surge in sun-seekers, ocean lovers and scuba divers wanting a more peaceful experience away from the hordes of tourists that swarm the larger island of Zanzibar, it has become an alternative island destination in Tanzania, and for good reason.

Sitting 21km off the Rufiji River Delta, Mafia Island — and its smaller neighbours of Chole, Jibondo, Juani and Banja — is blessed with a bounty of natural beauty both on land and underwater. The island is a tropical coastal home to some 50,000 people scattered in small fishing villages surrounded by cassava, rice and cashew farms and coconut groves, and connected by bumpy sand roads. Its long sandbanks and tidal beaches are lined with palms, while Chole Bay and the Kinasi Walls and offer a spectacular and varied marine biome teeming with a variety of fish species, corals, turtles and reefs that make up Tanzania’s first gazetted marine park.

Mafia Island has a long relationship with the ocean, dating back nearly 2,000 years. Arab and Persian dhows once sailed though the coastal trade waters between the Gulf, Mozambique and Madagascar and found rest in the natural anchorage of Chole Bay. Here the larger jahazis would be repaired with handmade rope made from coconut fibre, and supplies replenished for the onward journeys between Kilwa and Zanzibar. It should come as no surprise then that Mafia Island has developed a reputation as being home to some of the most famed boat builders in East Africa. Every evening the horizon is speckled with large handmade sails propelling the thin hulls of carved wooden dhows across the water, and with canoe-like ngalawas rowed by villagers bringing food and families home for the night.

This archipelago has such an interesting marine ecosystem, and unlike its counterpart, Zanzibar, it has not been damaged by the influx of unregulated mass tourism. The inland lagoons and bays are teeming with large pelagic fish, coral gardens and sheer rock face drop-offs that every level of diver from beginner to advanced will be able to enjoy. The waters contain the world’s largest fish — Rhincodon typus, or the whale shark — which is by far the most enthralling to spend a few fleeting seconds with between October and February. Measuring more than 13 meters in length, these docile plankton feeders aggregate in the channel between Mafia Island and the mainland, a unique sight to behold. 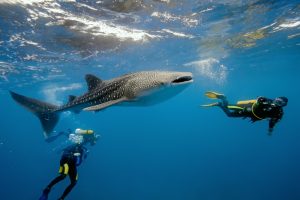 A legend tells the story of “Papa shillingi,” which in kiSwahili translates as “shark covered in shillings.” A local god was so pleased when he created this unique fish that he scattered gold and silver coins from heaven that landed on the fish’s back. When they swim on the surface of the water and the markings catch the sun, it is the fish’s way of thanking its maker for its beautiful appearance. Despite its magical aura, whale sharks are a very vulnerable species and are still commercially hunted for their fins and meat, which is exported to Asia.

Because the waters around Mafia Island are wonderfully unique, visitors should make sure that their tour or dive operator adheres to good practices by not chasing down sharks, blocking their natural pathways with their boats and effectively ‘dumping’ snorkelers directly on top of the shark without any regard for its well being. Harassing the wildlife should not be part of the travel experience — it does more damage than good, and can encourage unscrupulous operators to make it more about turning profit than the welfare and protection the species.

The few resorts and lodges scattered across the island emerge from coconut trees and matuki shops like little hidden oases. There is something for everyone when it comes to finding a place to rest your head. From the elaborate hillside villas of Kinasi Lodge, to the more rustic natural bandas of Pole Pole, both with spectacular views over the bay from your private hammock. If you have a taste for the unusual and unique, then spend a few nights at Chole Mjini. Here your room is a island castaway fantasy built high around magnificent baobabs, where you dine inside ancient ruins as the famous giant flying foxes sail though the skies every evening on their way to their nighttime roosts. Budget conscious? There is more wallet-friendly accommodation either in village homestays or small, relaxed lodges in the main town of Kilindoni (such as Butiama Beach), or along Utende village, where basic rooms can be found in places like Mafia Island Lodge if diving and exploring the waters is your main focus of your time.

There are no ATMs on the island, but don’t let that deter you. There is a small MBC bank in Kilondoni where you can change euros and dollars, but be aware that you might not get the fairest exchange rate here, so it is advisable to have cash on you before you arrive. Most of the hotels will be able to allow you to pay via bank transfer or with a credit card — provided the power is on.