As the capital of the country, Rabat might not be the most exciting stop in Morocco, but it’s definitely worth checking out, and you’ll likely need to pass through anyway if you are vacationing in the country. While it doesn’t have the fancy souks of Marrakech, there is a charm about the city that is far more relaxing and serene. It’s also the fourth largest city in the country with a metro population of around three million people. And as you can imagine, an ancient city with a population this large has quite a few things worth exploring for a weekend. Fortunately, 48 hours is the perfect amount of time to see the best of what the city has to offer.

After getting a cab from the airport or train station, check in to the Sofitel Rabat Jardin des Roses to feel like you are living out your Moroccan vacation as a sultan. The hotel lobby has some of the most eclectic and exquisite shops in the city where you can conveniently buy luxury handicrafts at Saydart, decorative items and flowers at Rokaflor, and Moroccan antiques and pottery at Yazamane. To get a jump start to your day, head to the Yacoub al-Mansour esplanade. Here you’ll find the Tour Hassan and the Mausoleum of Mohammed V. In 1195, the Tour Hassan was intended to be the largest minaret in the world (with an accompanying mosque) but was never finished. One wonders what it would have looked like if Sultan Yacoub al-Mansour had not met a premature death leaving it only 44 meters high. It’s worth strolling around awhile in between the pillars and getting some great photographs of Rabat before heading into the Mausoleum. Inside, you’ll find extravagant walls with high decorated ceilings, zellij tiles, and the tombs of King Mohamed V and his son King Hassan II. It’s definitely a fitting tribute to the Alaouite dynasty. 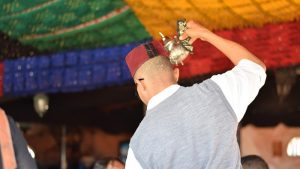 From the esplanade, catch a cab and head towards the medina and dine on a late lunch at Dar Naji, located just west of the Bab El Had gate. The entrance is just off the street, where you’ll be greeted and walked down a long mosaic-filled hall full of large, shiny brass ornaments lining the walls. Make sure to dine in the colorful upstairs terrace, where you can enjoy authentic cuisine while watching the hustle and bustle of the streets below. After loading up on hearty Moroccan food, it’s time to head into the medina and walk off your meal by strolling through the narrow streets. Once inside, you’ll find traditional shops and local street vendors selling everything from fresh sugarcane to different styles of djellabah and other colorful dresses. While you won’t find many high end souvenirs like you might in Marrakech, you’ll still find several spice shops, obscure vendors, and clothing stores to browse — one could certainly argue that the experience in Rabat is a bit more authentic, and way less pushy. Before you leave, make sure you pick up some Moroccan pastries to take back to your hotel.

Once your back at the hotel, hit up the bar at Golden Fish for some pre-dinner cocktails by the poolside. Afterwards, stroll over to the luxurious Al Warda restaurant, where you can dine on an indulgent dishes like lamb tagine or mushroom-stuffed sea bream. You probably want to make a reservation as it can get rather busy on weekend nights. And if you still have a bit of energy after filling up, you’ll definitely want to check out the So Lounge. This multilevel club is one of the best in the city and gets packed on the weekend with partiers tearing up the floor until four in the morning. 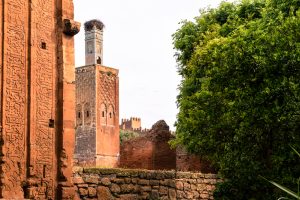 The next morning, head down to the lobby to enjoy a fantastic breakfast to get you fueled for the day. Then have the concierge get you a cab and head out for the morning in Chellah to explore some ancient history. The walled city of Chellah has existed since pre-Roman and pre-Islamic times, but was abandoned in 1154 AD. It’s now home to nothing more than a curiously large population of storks, cats, and various other animals that call it home. Wandering through the complex, you’ll find all kinds of ancient ruins, a grave site, a Roman bath, and several crumbled monuments. Signs in French and Arabic explain and give context to the ruins, but if you don’t speak either, you’ll just have to use your imagination. Although the ruins are great, perhaps the most interesting site here are the storks that make their nests on the tops of buildings and fly overhead as you walk around. You may want to have the cab wait for you or get the cab’s number, as hailing one from the busy street can be rather difficult. 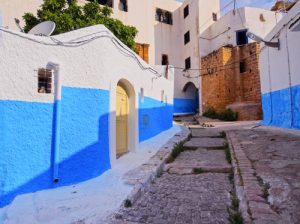 After getting a history lesson at Chellah, it’s time to head to the Kasbah of the Udayas to explore the labyrinthine streets and wonderful architecture. The streets of the Kasbah are painted in shades of blue and you’ll be able to stroll through a delightful small circuit of tiny streets that remind one of Chefchaouen. A guide through here isn’t really necessary, and it’s pretty easy to find your way out if you take a wrong turn. Follow the smell of the ocean breeze and emerge on the Avenue Laalhou, where you can walk up to the battlements to get an excellent view of of the sea. The Bab des Oudayas can also be found here with its decorated Mirhab entrance, one of the most glorious entrance gates in Morocco. There are also several cafes in the area, and after walking around a bit, you’ll likely want to stop at one and people watch while enjoying some traditional Moroccan mint tea and lunch. Any cafe will do really, as this area isn’t really touristy at all, so you’re sure to get something authentic.

Once refreshed, enjoy the rest of the afternoon with a stroll down the beach that’s only a few blocks away. When the winds are strong and the waves are high, you’re also likely to see some surfers. And if there aren’t surfers, there’s likely a pick up soccer game to sit back and watch for a bit. If you happen to be traveling with kids, the Rabat Zoo is also a nice option for filling out the rest of your day. Serious shoppers looking for upscale goods may want to cab it to the Megamall (no it’s not exactly that big huge). Most of the shops will be your standard chain stores found in most international cities, along with a smattering of local designers. 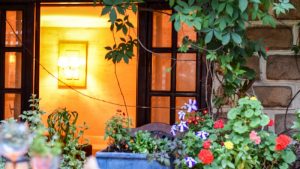 Once returning to the hotel, get situated, then cab it to Picolo’s which is only around a five minute drive away. The restaurant specializes in Mediterranean cuisine with a focus on French fine dining and is undoubtedly one of the best places for a meal in the city. But outside of the food, the ambiance is a big reason people come here. As you walk in, you’ll immediately smell jasmine and roses as you’re brought into an elegant garden setting full of flickering candles, lemon trees and roses. It’s the perfect place for a romantic night out or to reward yourself after a whirlwind weekend in Rabat.