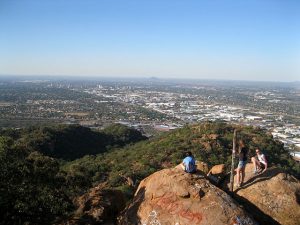 When it comes to must-see African cities, Gaborone is hardly bucket-list worthy: it doesn’t have the beauty of Cape Town or the culture of Johannesburg. But as Botswana’s capital and largest city, you may find yourself in town, especially if you’re in the diamond or beef business. So the good news is that while Gabs (as locals call the city) may feel a bit provincial and boring, it also is safe, friendly and easy to navigate. With a population of just over 230,000, Gabs feels more like a small town than a major city, which can be refreshing, especially if you’re here for business. If you are a fan of the Alexander McCall Smith mystery series The No. 1 Ladies Detective Agency (or the HBO television show based on the book), Gaborone will be of interest, as it is where the novels are set.

Gaborone’s city center is defined by the Main Mall, a pedestrian only strip of shops, restaurants and banks located between Independence Ave and the government complex of ministries on Khama Crescent as well as the train station.

Most of Gaborone’s social scene, however, takes places in the numerous indoor shopping malls around the city, including the Riverwalk Mall, which is just southeast of the city center. Inside these you’ll find plenty of retail shops as well as restaurants, bars and supermarkets.

Gaborone doesn’t have a large number of attractions, but if you know where to look, there is enough to keep you culturally stimulated for at least a few days. One of the stranger attractions is the Three Dikosi Monument, which is located downtown between Eastern and Western Commercial Streets. It memorializes three chiefs from Botswana’s colonial era who actually argued the country should stay a protectorate of Britain, rather than fight for independence. In hindsight, this was probably a good idea, as British rule was preferable to being controlled by the more exploitative Cecil Rhodes, who ran the neighboring countries at the time.

Fans of the No. 1 Ladies Detective Agency series of novels will want to check out the World’s Smallest Opera House, which is collaboration between author McCall Smith and the local art scene. It hosts local singing, theater productions and even operas (it is the smallest opera house in the world) in a variety of showcases throughout the year. Look for it just a few kilometers south of the city center.

Also just outside the city center is the Mokolodi Nature Reserve. You won’t see any big cats here, but this reserve has lots of hoofed and smaller game. The reserve was established so locals could see natural wildlife in a non-zoo-like setting without having to travel too far. As such, it is Botswana’s third most popular reserve! And this is a country known for its amazing safari reserves (though most are geared exclusively to the high-end crowd, and located far away from Gaborone).

Although Botswana is not famous for its handicrafts like Zimbabwe or South Africa is, if you are going to shop for art in Botswana, Gaborone is the place to do it. The city is home to some unexpected fine art galleries with some exquisite creations for purchase. The Thapong Visual Arts Center is one such venue, and features contemporary local art that goes beyond the imported and mass-produced wooden giraffes and masks found at highway markets. Another excellent place to look for locally produced gifts is at Kahalari Quilts, where local Batswana women create one-of-a-kind quilts that make for perfect take home gifts or keepsakes.

Also check out Botswanacraft in the Kgale View Shopping Mall. It sells made-in-Botswana pottery, jewelry and baskets, as well as wood and stone carvings, textiles, jewelry and handicrafts from across the continent. This is the largest craft emporium in Botswana.

Gaborone has a range of hotels from budget to relatively high-end, although it doesn’t have anything that can be truly defined as luxury sleeping. The most posh property is the Gaborone Sun, run by South Africa’s reputable Sun International brand. It boasts a pretty swimming pool area and a casino. The Cresta President, which was the city’s first luxury hotel, is another solid business option. It is located right downtown, overlooking The Mall.

When it comes to dining in Gaborone, you’ll find most of the restaurants located inside the malls scattered around the city. The pedestrian mall downtown also has eating options, but they are more of the fast food variety – Gaborone has a love affair with chicken, and there are multiple competing chicken take-away shops.

The Bull & Bush Pub has been around for ages now and is pretty much a Gaborone legend. This is the place where locals and expats bring visitors, whether in the city for business or pleasure. It’s a British pub style place (as are most of Gaborone’s restaurants). The menu features pretty much everything, including vegetarian options, but it is most famous for its thick cut steaks and cold beers. There are different themes each night and the al fresco beer garden is the place to see and be seen in Gaborone.

Gaborone has a reputation for serving fine steaks, and another excellent choice beyond the Bull & Bush Pub, is the Beef Baron Restaurant. Many argue it serves the best steaks in town, and the atmosphere is also happening (although it isn’t the Bull & Bush).

Café Dijo, in the Kgale View Shopping Mall, is where to go for breakfast or lunch. Beyond daily food specials like tandoori chicken wraps and a pepper steak pie, it also does excellent coffee and has free Wi-Fi.

By road, Gaborone is much closer to Johannesburg than it is to Botswana’s own safari regions. From Joburg it is an easy four-hour drive to Gabs, as compared to 11 hours in the car from Maun (the hub of safari activity) to the capital.

Gaborone can also be accessed by bus and plane. There are daily bus shuttles (in modern coaches with free onboard Wi-Fi) from OR Tambo International Airport in Johannesburg, as well as other points in South Africa. Intercape is the main bus provider.

To get around Gaborone you’ll most likely take private taxis. There is not much public transportation at all. Ask your hotel to call a taxi for you when you are headed out, and keep the driver’s card so you can call him or her when you need to return.

Location: Gaborone is located in southern Botswana, just across the border from South Africa, and 375 kilometers north of Johannesburg.

Languages: English is the official language in Botswana, but Setswana is also widely spoken.

Weather: There is not a huge difference between winter and summer temperatures in Gaborone, but January is usually the hottest month with an average temperature of 25°C (78°F). June y are the coldest months with averages at 13°C (55°F). So bring a warm coat for winter, and wear loose, light clothing in summer.

Money and banking: The Botswana pula is the currency of Botswana. Banks and ATMs are abundant in Gaborone with plenty of branches on the Main Mall downtown and also the shopping malls ringing the city. Most hotels, restaurants and shops that are tourist-oriented will accept credit cards such as Visa and Mastercard, but usually not American Express.

Tipping and local customs: It is normal to tip between 10% and 15% at restaurants. You should also tip a few pula to the bellman at the hotel, to the maid and also to the taxi driver.